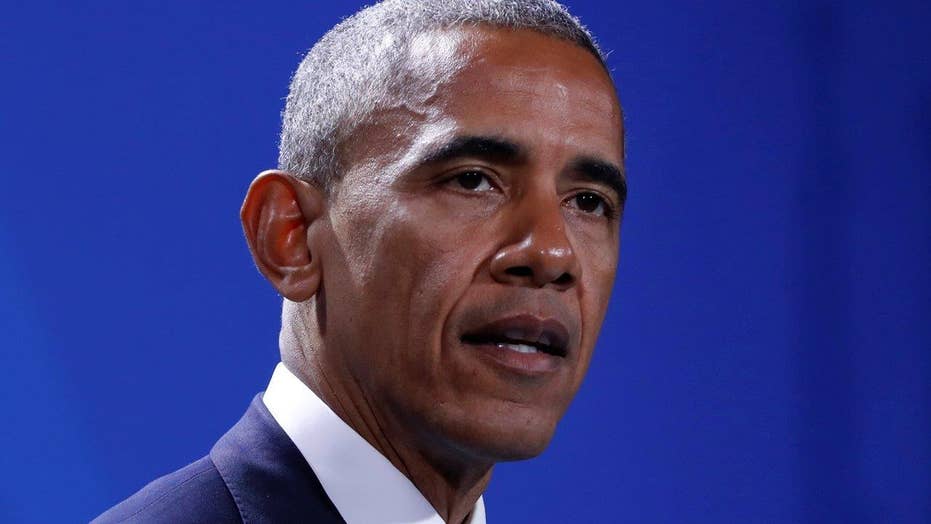 Obama: Do not take our way of life for granted

President Obama, speaking at a press conference in Germany, passed up the opportunity Thursday to tamp down the anti-Donald Trump protests back home -- urging those taking part not to remain "silent."

The president fielded a question on the protests during a joint news conference in Berlin alongside German Chancellor Angela Merkel.

"I suspect that there’s not a president in our history that hasn’t been subject to these protests," he answered. "So, I would not advise people who feel strongly or who are concerned about some of the issues that have been raised during the course of the campaign, I wouldn’t advise them to be silent."

He added: “Voting matters, organizing matters and being informed on the issues matter.”

Protests have broken out in cities across the country since Trump's upset victory last Tuesday. Some have been peaceful, but there have been incidents of violence -- and a demonstration last Thursday in Portland escalated into a destructive riot.

Trump's campaign manager Kellyanne Conway repeatedly has called for Obama to speak out on the unrest.

“I am calling for responsibility and decency. I hope President Obama says, ‘Cut it out,'" she told "Fox News Sunday."

Obama, though, so far has not done so, speaking mostly in generalities.

"Whenever you have got an incoming president of the other side, particularly after a bitter election like this, it takes a while for people to reconcile themselves with that new reality. Hopefully, it's a reminder that elections matter and voting counts," he told reporters on Monday.

Asked about the president’s reaction to those carrying “He’s Not My President” signs, White House Press Secretary Josh Earnest said the freedom to protest should be “exercised without violence” but that “it's not surprising that people are disappointed in the outcome, but it's important for us to remember, a day or two after the election, that we're Democrats and Republicans, but we're Americans and patriots first.”

While he expressed cautious optimism Thursday that Trump would be an ally to Europe, Obama advised the president-elect to avoid simply taking “a realpolitik approach” with Russian President Vladimir Putin.

Obama also suggested Trump not “cut deals when convenient,” and he urged him to stand up to Putin when Russia’s values "differ from international norms."

Obama also argued social media can erode a democracy, after a campaign in which the candidates' Twitter accounts -- especially Trump's -- acted as their own broadcasting outlets.

“If we are not serious about facts and what is true and what is not. Particularly in an age of social media when people are getting their information in soundbites and snippets ... if we cannot discriminate between serious arguments and propaganda, then we have problems,” he said.