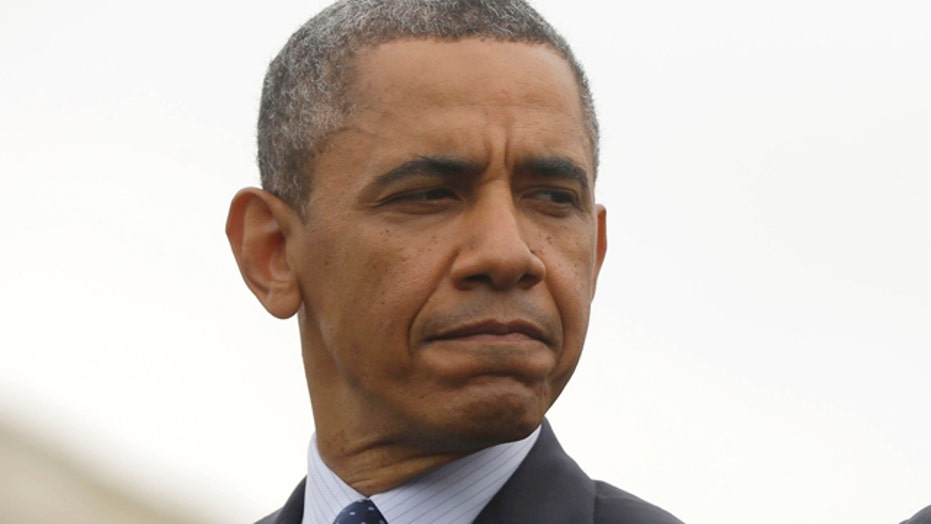 “The language should be more active than phrases like ‘I didn’t have any patience for this’ or ‘if the allegations are true.’ I lose patience with my 9-year-old. This is a lot more serious than that.”

In the politics of a scandal, speed can kill.

That’s why the Obama White House, faced with an ever-growing stack of ethical and legal woes, is looking to slow things down.

Reporters seemed baffled on Tuesday that White House Press Secretary Jay Carney kept official outrage over the targeting of conservative groups by the IRS on the conditional side. “If” was the big word for Carney. President Obama would be furious “if” the agency had harassed and abused his foes and “if” that were the case, Obama would take action.

Reporters were flummoxed. The IRS has already apologized for doing those things. Why would the president need an inspector general’s report to start taking action? There’s more to learn about how egregious and far-reaching these offenses were, but there is no debate over whether they occurred.

Obama generally favors deliberative process, a management style that has been equated to that of a department head at a university. His supporters and the political press like this idea, especially as compared to the “cowboy” approach of a certain Republican presidential predecessor.

But sometimes they don’t much like the results. The Syrian genocide, the “train wreck” of a health law, the dithering over the debt and spending and the continued operation of the prisoner of war camp at Guantanamo Bay are all outcomes that liberals think may have been avoided if the president had been bolder and more of a “decider.”

When it comes to scandal, though, go-slow has been a fruitful approach for Obama.

Take the raid by Islamist militants on the U.S. outpost in Benghazi, Libya. Facts now accepted by all – that administration spin doctors doped up talking points about the raid for political purposes, that the State Department had refused extra security for the endangered diplomats and that it was widely known that there had been no demonstrations in the city prior to the attack – look bad now, but not as bad as they would have in October of 2012.

Once Carney could say dismissively that the raid was “a long time ago” and Hillary Clinton could shout, “At this point, what difference does it make?” the urgency and most of the peril was gone for Obama. Yes, yes, mistakes were made but who really wants to rehash all of that other than those nasty old House Republicans?

Some mid-level bureaucrats may eventually have to get cashiered for the botch and the cover up, but as long as there’s no evidence Obama or one of his intimates expressly told someone to lie, the whole thing turns into a grinding word game.

This approach on Benghazi helped Obama win a second term and kept his critics sputtering as they try to distill the drip, drip, drip of disclosures into a scandal more potent.

But it has taken its toll on the administration’s credibility, particularly that of Carney.

Reporters had only recently realized the difference between “transparency” and accountability in Obamaland. Transparency means document dumps, buried information and delayed disclosures, not access and forthrightness. So it stung particularly when Carney taunted them by sticking to a narrow definition of “edit” in talking about the doctored Benghazi talking points. You didn’t say “Simon says” so I didn’t have to tell you.

Having a former reporter who so often bathes in the crystal springs of “transparency” engage in that kind of parsing was infuriating for many reporters, including some of the most credulous.

So when the administration says that it will wait and see what happened with the IRS or Carney channels John Banner on the Justice Department seizing records from reporters, it doesn’t sound so good anymore.

But if the president can just hold on until the bad conduct by his subordinates switches from present tense to past tense, maybe folks will lose interest. Maybe producers and editors will go back to news about murderous skanks, miscreant celebrities and diet tips.

But when it comes to spying on the press and harassing the president’s political foes, it’s going to be a harder sell, especially with Obama’s credibility damaged by the Benghazi gambit.

Semantic games about something that happened in Libya, even when it results in the deaths of four Americans, don’t animate the thinking of most Americans. But abuse of power directed toward Americans by a government that is already widely distrusted is a big deal.

Slow walking these scandals will tend to make them fester and add to the deepening distrust of this administration. If Obama looks passive or contemplative on subjects that touch the lives and risk the freedoms of ordinary Americans, it’s only going to get worse. He has to show not just potential outrage, but real action.

Having Attorney General Eric Holder, who is already facing questions about his agency’s trawling of reporter records, investigate the IRS is not going to cut it.

The only way for Obama to avoid having special prosecutors climbing all over his administration and discovering other unhappy facts is to start swinging a meat axe in his own administration. A little rough justice is required.

And if that approach looks impossible because the guilt is too widespread or reaches into the White House, the game is up anyway. Might as well get cracking.

“[Reporters] really feel they were swindled by the president and by Jay Carney on the [Benghazi] talking points.  Whether it's the most material thing in the world is not relevant.  But they were told again and again by Carney, and last week he repeated it, that there was no editing from the White House and the State Department.  And he only could do that by redefining the word ‘edit.’  These are journalists who know what editing is.”