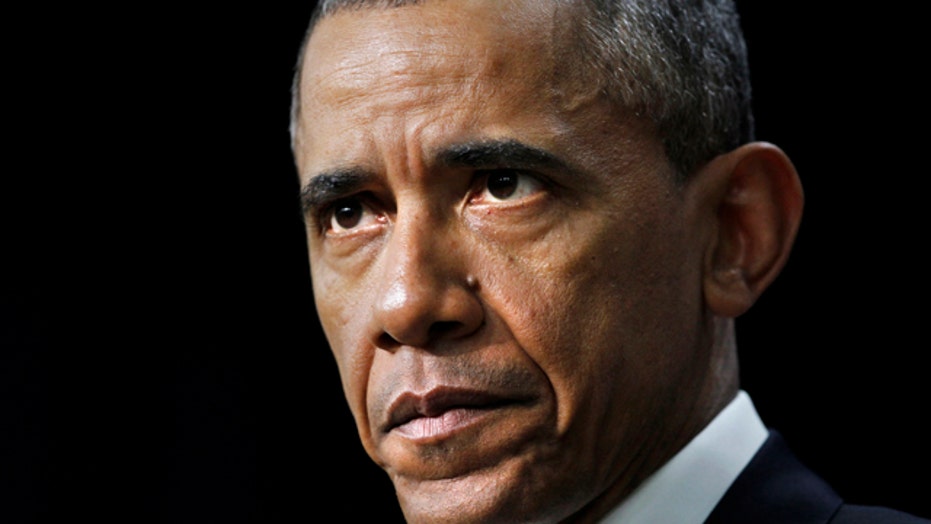 WASHINGTON – President Obama defended his administration’s approach to the terror threat at a White House summit Wednesday, standing by claims that groups like the Islamic State do not represent Islam -- as well as assertions that job creation could help combat extremism.

Obama, addressing the Washington audience on the second day of the summit, said the international community needs to address “grievances” that terrorists exploit, including economic and political issues.

He stressed that poverty alone doesn’t cause terrorism, but “resentments fester” and extremism grows when millions of people are impoverished.

“We do have to address the grievances that terrorists exploit including economic grievances,” he said.

He also said no single religion was responsible for violence and terrorism, adding he wants to lift up the voice of tolerance in the United States and beyond.

Obama’s address came as Republican lawmakers and others criticized the administration for declining to describe the threat as Islamic terrorism.

State Department spokeswoman Marie Harf has also come under fire for suggesting several times this past week that more jobs could help address the terrorism crisis.

On Tuesday, Rob O'Neill, former Navy SEAL Team 6 member who claims to have fired the shot that killed Usama bin Laden, told Fox News: "They get paid to cut off heads -- to crucify children, to sell slaves and to cut off heads and I don't think that a change in career path is what's going to stop them."

Obama also called on Muslim leaders to “do more to discredit the notion that our nations are determined to suppress Islam, that there is an inherent clash in civilizations.”

Obama acknowledged that some Muslim-Americans have concerns about working with the government, particularly law enforcement, and that their reluctance “is rooted in the objection to certain practices where Muslim-Americans feel they’ve been unfairly targeted.”

He said it was important it make sure that abuses stop and are not repeated and that “we do not stigmatize entire communities.” He also said it was vital that “no one is profiled or put under a cloud of suspicion simply because of their faith.”

Although Obama called for a renewed focus on preventing terrorists from recruiting and inspiring others, some thought his message seemed to miss the mark.

“He was meandering, unfocused and weak,” said Richard Grenell, former U.S. spokesman at the United Nations during the George W. Bush administration and a Fox News contributor. “He was talking about isolating terrorists. He doesn’t understand the threat that we face… People are being burned in cages and he’s talking about more investments?”

Sen. Ted Cruz, R-Texas, in an interview with Fox News, called Obama an "apologist for radical Islamic terrorists." And he mocked the president for recently comparing modern-day atrocities to those committed during the Crusades.

"I don't think it's too much to ask the president to stay in the current millennia," Cruz said, describing the rhetoric as "bizarre politically correct double-speak."

Leaders from 60 different countries traveled to Washington for the summit this week.

Community leaders from Boston, Minneapolis and Los Angeles were also in attendance and discussed how their cities could help empower communities to protect themselves against extremist ideologies.