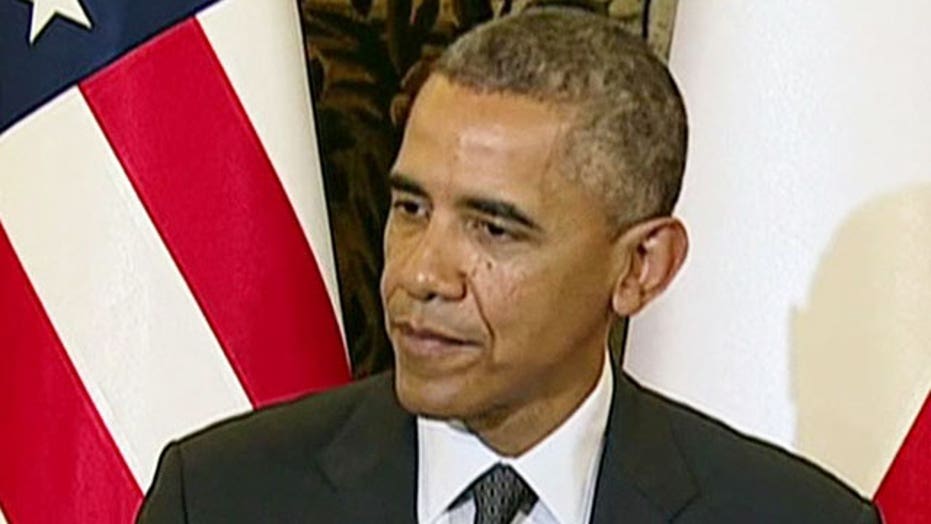 President Obama, in his first public comments on the controversial trade of five Taliban prisoners for Sgt. Bowe Bergdahl since the deal was announced, acknowledged Tuesday there's "absolutely" a risk that the former Guantanamo inmates will try to return to the battlefield -- but nevertheless defended the deal as in America's interest.

"I wouldn't be doing it if I thought that it was contrary to American national security," Obama said.

The president is facing heavy criticism from Congress for negotiating the release of the "Taliban Dream Team" and for proceeding with the prisoner swap without telling lawmakers in advance. Sen. John McCain, R-Ariz., in an interview with Fox News on Monday, said the prisoners -- high-ranking Taliban leaders -- are "hell-bent on killing Americans."

Speaking in Poland at the first stop of a European tour, Obama did not deny that the prisoners could try again to target Americans.

"Is there the possibility of some of them trying to return to activities that are detrimental to us? Absolutely," Obama said. "That's been true of all the prisoners that were released from Guantanamo. There's a certain recidivism rate that takes place."

But he said the Qataris, who are supposedly watching over the newly freed Taliban prisoners, are monitoring them, as is the United States. He claimed America will be "keeping eyes on them."

Reacting to Obama's comments, McCain said Qatar has "notoriously played both sides of the street, as far as Muslim extremists are concerned" and cast doubt on the president's assurances.

"Mullah Omar now has his cabinet restored," he said of the infamous Taliban leader.

The president also responded Tuesday to concerns about Bergdahl's conduct, and questions over whether he had effectively deserted when he walked off his post in 2009, only to be captured by the Taliban.

Obama said they saw an opportunity to bring Bergdahl back and seized it, and that the U.S. government will bring a soldier back regardless of circumstances.

Gen. Martin Dempsey, chairman of the Joint Chiefs of Staff, issued a similar statement in response to concerns about Bergdahl's conduct. On Facebook, Dempsey said those questions "are separate from our effort to recover ANY U.S. service member in enemy captivity."

"This was likely the last, best opportunity to free him. As for the circumstances of his capture, when he is able to provide them, we'll learn the facts," Dempsey said. "Like any American, he is innocent until proven guilty. Our Army's leaders will not look away from misconduct if it occurred. In the meantime, we will continue to care for him and his family."

In a potential reference to claims that soldiers died during the search for Bergdahl, Dempsey also wrote: "Finally, I want to thank those who for almost five years worked to find him, prepared to rescue him, and ultimately put themselves at risk to recover him."

Meanwhile, concerns continue to mount about the risk posed by the five Taliban members who were released. Defense Department documents on WikiLeaks detail the violent backgrounds of the prisoners.

One, Mohammad A Fazl, served as the Taliban Army chief of staff and was wanted by the United Nations for possible war crimes, "including the murder of thousands of Shiites." He was listed as a high risk to the U.S. and its allies.