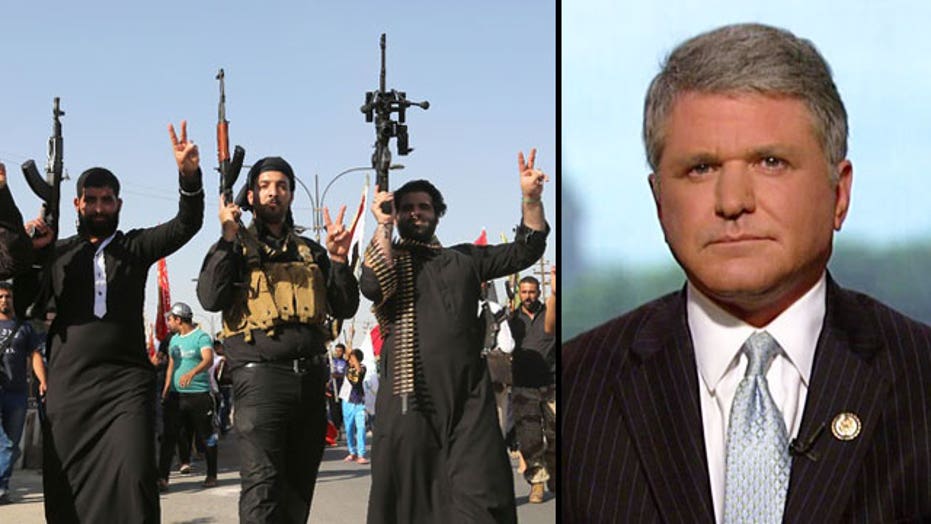 President Obama on Saturday restated his plan to destroy Islamic State but did not say the United States "is at war" with the Middle East terror group, creating more uncertainty what exactly is the U.S. mission.

"We're moving ahead with our strategy to degrade and ultimately destroy this terrorist organization," Obama said in his weekly radio and online address.

The president's language was almost identical to what he said Wednesday when he told the country in a prime-time TV address that the United States would launch direct air strikes in Iraq on the terror group and that he has OK’d such strikes in Syria, as part of a broader counter-terrorism effort with allies.

However, conflicting and at times seemingly evolving messages from top U.S. officials since the address has sparked concern about the president's exact goals toward destroying the Islamic State, which has made a surprising and deadly rise to power in Syria and Iraq over the past several months.

The administration appears to be trying to find the exact message to appeal to Americans concerned about the U.S. getting involved in another Middle East conflict after the Iraq War and the war in Afghanistan. A Reuters/Ipsos poll released Friday shows support for the air strikes but little backing for a years-long air campaign or sending soldiers into the region.

Roughly 64 percent of those polled online said they backed the strikes. However, support dropped to 53 percent if the strikes were to last two or three years, and only 9 percent of those surveyed backed sending American troops to fight the terror group, according to the poll.

The White House and Pentagon acknowledged Friday that the U.S. "is at war" with the Islamic State -- contradicting statements Thursday by Secretary of State John Kerry, prompting criticism from Capitol Hill Republicans about the administration appearing to downplay the conflict.

White House Press Secretary Josh Earnest and Pentagon spokesman Rear Adm. John Kirby used almost identical language when pressed by reporters about whether the expanded military operation against the terrorist group is in fact a war.

On Thursday, Kerry described the military effort as "very significant" and a "major counter-terrorism operation," but said "war is the wrong terminology."

In addition, State Department spokeswoman Marie Harf said she would not refer to U.S. efforts as part of the "war on terrorism."

"Then what was the president talking about [Wednesday] night?" McCain said Thursday.

Senior State Department officials told Fox News on Friday that Kerry's comments were consistent with what other senior U.S. officials were saying at the time and made clear that the secretary remains on the same page as the rest of the administration.

"This was a deliberate, administration-wide adjustment in language," a senior State Department official said, "which Secretary Kerry would have also used today had he been asked."

House Homeland Security Committee Chairman Michael McCaul, R-Texas, said Friday that the semantics over what to call the operation “weakens the mission.”

Obama said Saturday: “The best way to defeat a group like ISIL isn’t by sending large numbers of American combat forces to wage a ground war in the heart of the Middle East. That wouldn’t serve our interests. In fact, it would only risk fueling extremism even more.”