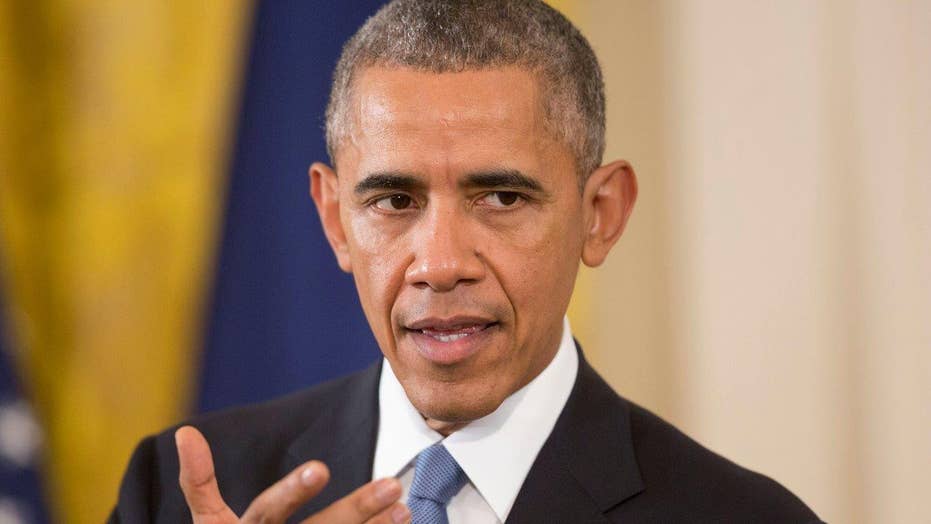 Obama: Downed warplane a result of Russian strategy in Syria

President Obama pointed the finger at Russia over its warplane being shot down by Turkey, suggesting the incident might not have happened if Moscow were more concerned with hitting ISIS targets than moderate opposition to Syria’s Bashar Assad – a campaign that puts them dangerously close to the Turkish border.

The president, speaking Tuesday alongside visiting French President Francois Hollande in Washington, stressed that officials are still gathering details on the international incident.

He and Hollande both said they want to prevent an “escalation,” as Obama urged the Russians and Turks to talk to one another.

But Obama also suggested the nature of Russia’s air campaign is contributing to such confrontations.

“I do think that this points to an ongoing problem with the Russian operations,” Obama said. “In the sense that they are operating very close to a Turkish border, and they are going after moderate opposition that are supported by not only Turkey but a wide range of countries.”

He said that if Russia directed its efforts toward the Islamic State, “some of those conflicts, or potentials for mistakes or escalation, are less likely to occur.”

Obama also said Turkey “has a right to defend its territory and its airspace.”

The French president arrived in Washington 11 days after the Paris terror attacks. Part of the purpose of the trip was to urge Obama to work with Russia to build a new coalition to fight the extremists.

Obama said Tuesday he would like to have Russia’s cooperation in the fight against ISIS.

“Them cooperating would be enormously helpful,” Obama said.

But Obama said the challenge right now is Russia’s focus on “propping up Assad” rather than going after ISIS. He called Iran and Russia a “coalition of two” supporting Assad.

The Turkey-Russia incident complicated Hollande’s visit, and his effort to build a broader coalition.

Russian President Vladimir Putin said earlier that Turkey’s decision to shoot down a Russian warplane near Turkey's border with Syria is a "stab in the back" and would have “significant consequences” for its relations with Turkey.

Even before the incident, Hollande faced a tough challenge in getting Obama to agree to a partnership with Moscow. The U.S. is deeply skeptical of Putin's motivations, given his long-standing support for Assad.

The U.S. appeared to be keeping its distance from the overall disagreement. Col. Steve Warren, a spokesman for the U.S.-led coalition, said the jet downing is an "incident between the Russian and Turkish governments."

As for the incident, he said: “We were able to hear everything that was going on. Obviously, you know, these are on open channels. I'm sure there's others who heard it all as well.”

“There have been times in our history, in moments of fear, when we have failed to uphold our highest ideals, and it has been to our lasting regret,” Obama said. “We must uphold our ideals now.”

Obama defended the plan to bring in 10,000 Syrian refugees through next year a week after the House, with support from dozens of Democrats, voted to significantly tighten screening for Syrian and Iraqi refugees amid security concerns. The Senate has not yet voted on the measure.

But Obama defended the current vetting process, saying: “Nobody who sets foot in America goes through more screening than refugees.”

Meanwhile, Obama vowed to be vigilant while urging Americans not to change how they live their lives, in the wake of the Paris terror attacks. “Americans will not be terrorized,” he said.

He also said the U.S. and France “stand united” and said ISIS “cannot be tolerated” and “must be destroyed.”

Given the rash of attacks, Obama is now facing increased pressure at home and abroad to ramp up U.S. efforts to destroy the militants. So far, Obama is resisting calls to either change or significantly escalate his approach, and instead is focused on getting other countries to offer more counterintelligence, humanitarian and military assistance.

The U.S. campaign has centered largely on launching airstrikes, while training and assisting security forces on the ground in Iraq. Efforts to train and equip moderate rebel groups in Syria have struggled, and Obama has authorized the deployment of 50 special operations forces to the country to jumpstart the program.

France has stepped up its airstrikes following the Paris attacks, relying in part on U.S. intelligence to hit targets in Raqqa, the Islamic State group's stronghold in Syria.

Last week, Hollande called for the U.S. and Russia to set aside their policy divisions over Syria and "fight this terrorist army in a broad, single coalition." But his office acknowledges that "coordination" sounds like a far more realistic goal.

From Washington, Hollande will travel to Moscow for meetings with Putin.

While Russia is backing a new diplomatic effort in Syria, Moscow still refuses to support steps that explicitly call for removing Assad from power.