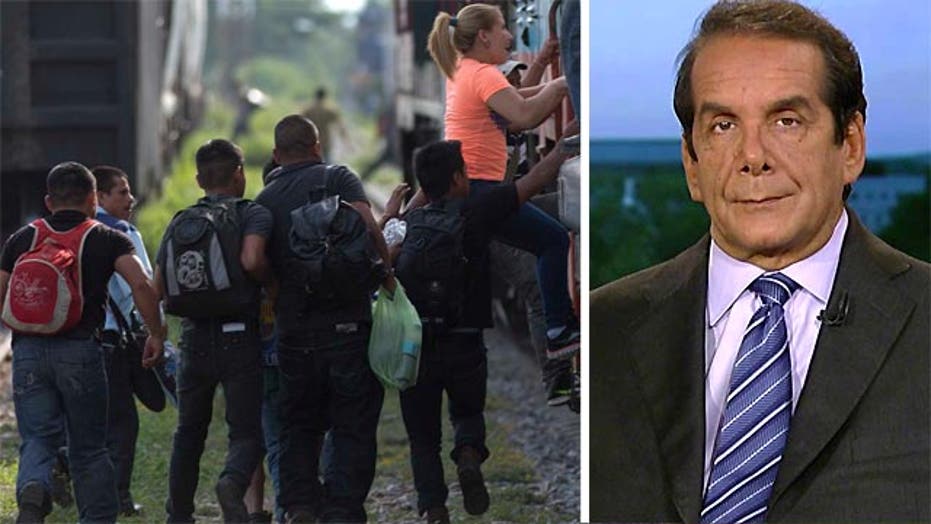 WASHINGTON – What can President Obama actually do without Congress to change U.S. immigration policies? A lot, it turns out.

There are some limits under federal law, and anything the White House ultimately decides to do may be challenged in court as unconstitutional. But leading legal experts say the White House almost certainly could delay indefinitely efforts to deport millions of immigrants already in the U.S. illegally, and it could give them official work permits that would allow them to legally find jobs, obtain driver's licenses and pay income taxes.

Here is what Obama could not do without approval from Congress: He couldn't generally give large groups of immigrants permission to remain permanently in the United States, and he couldn't grant them American citizenship. And he couldn't generally make them eligible for federal or state social benefit programs, such as welfare payments, food stamps or the administration's health care plans.

"There is prosecutorial discretion which can be exercised in these sorts of situations," said Leon Rodriguez, a former Justice Department lawyer and the newly confirmed director for U.S. Citizenship and Immigration Services. "In most enforcement realms, generally there is pretty broad discretion." Rodriguez spoke earlier this week on Capitol Hill during an oversight hearing for the House Judiciary Committee.

With Congress declining to approve significant changes to immigration laws, the White House is hinting that Obama is considering broadening a program known as Deferred Action for Childhood Arrivals to temporarily shield from deportation many young immigrants who came to the U.S. as children and allow them to get a work permit. Immigration reform advocates have been pushing to include parents of U.S. citizens and the parents of young immigrants already protected under the earlier program, which covers more than 700,000 immigrants so far.

All told, expanding the program could affect as many as 5 million immigrants who came to the U.S. illegally.

In a direct challenge to Obama's policies, the Republican-led House on Friday night passed legislation that appeared designed to prevent those who've already gotten work permits under the deferred action program from renewing them, ultimately making them subject to deportation. With the Senate controlled by Democrats, the bill seemed unlikely to advance beyond the House.

So, how powerfully can Obama act without approval by Congress?

Obama announced in March that he had directed Homeland Security Secretary Jeh Johnson to review the administration's immigration enforcement polices and recommend any possible changes. In May, Obama delayed the review to allow Congress time to act on immigration reform before it adjourned this week for the summer.

Before leaving for the August recess Congress did not pass legislation to provide the funding Obama asked for to help deal with the more than 57,000 unaccompanied child immigrants, mostly from Central America, who have crossed the border since Oct. 1.

Obama said Friday that House Republicans were trying to pass the "most extreme and unworkable bills," knowing they wouldn't make it to his desk. On Friday night, the House approved a bill that would send migrant youths back home without hearings, a measure that also appeared destined to go nowhere in the Senate.

"That means while they're out on vacation, I'm going to have to make some tough choices to meet the challenge, with or without Congress," the president said.

Immigration law requires congressional action to create a benefit program for a specific class of people. The Obama administration said the young immigrants protected under the childhood arrivals program don't count as a class because each request not to be deported is reviewed individually, on a case-by-case basis.

David Leopold, a Cleveland immigration lawyer who has supported Obama's previous administrative changes to immigration law, said nothing in the law requires the government to deport every immigrant living in the country illegally.

Rodriguez told lawmakers that the government doesn't have the resources to deport the more than 11 million immigrants estimated to be living illegally in the United States, "so, the question is, are we going to let them persist in the shadow economy or are we going to have them work and pay taxes?"

Obama has already pushed the bounds of his authority on immigration law further than his predecessors.

After a broad immigration bill failed in 2007, President George W. Bush ordered his staff to come up with every possible change he could make without the approval of Congress.

Gregory Jacob, who worked on immigration issues with the president's Domestic Policy Council, said included in the list was providing similarly broad protections from deportation as those implemented by Obama. But Bush's staff concluded that the president didn't have the legal authority to grant such "sweeping and categorical" protections, Jacob said.

Bush's director for Immigration and Customs Enforcement, Julie Myers Wood, said much of the discussion at the time focused on small changes to visa programs or other efforts that would impact relatively small groups of immigrants. One concern, she said, was the potential for "unintended consequences" of encouraging more illegal immigration.

Republicans have complained that Obama has done what the Bush administration feared. Many have blamed the president for the influx of more than 57,000 unaccompanied immigrant children, mostly from Central America, who have been arrested at the Mexican border since Oct. 1.