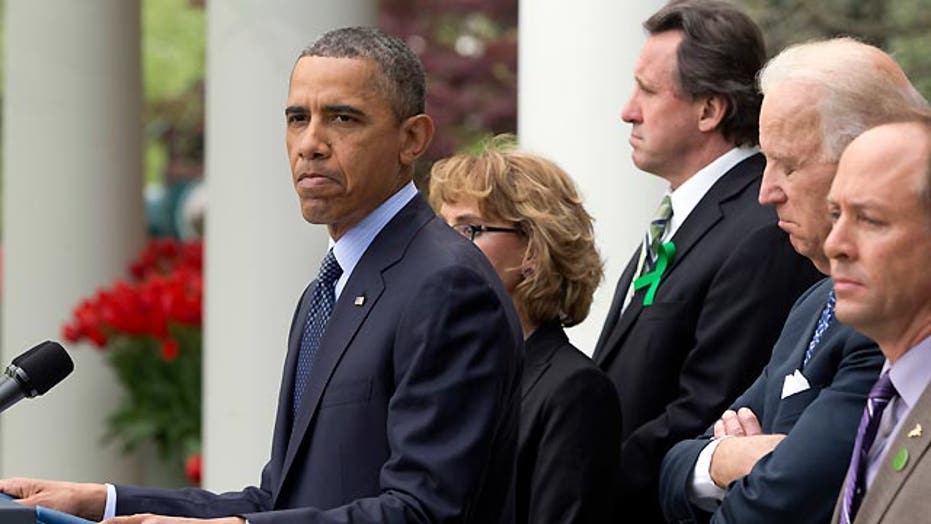 “All in all, this was a pretty shameful day for Washington, but this effort is not over''

An angry President Obama vented his frustrations with Congress after several of his fellow Democrats helped block gun-control legislation in the Senate. Denouncing the “lies” of his political opponents and calling the day “shameful,” Obama vowed to fight on.

But there seems to be little fear of Obama’s anger.

The president promised that he would mobilize his supporters to push his agenda, defy history to make midterm election gains and thereby avoid lame-duck status. But it’s apparent that many of his fellow Democrats either don’t think he is serious or don’t believe he can make it stick.

There’s reason for them to disbelieve.

Obama’s strategy of battering Republicans with a series of painful votes to make midterm gains for his party depends on getting Democrats to take politically risky stances. If Obama cannot threaten or entice Democrats to vote his way, though, the plan cannot work.

As the vote on gun control approached, Obama did hit the campaign trail as promised to speak in support. But it was a muted measure. Obama didn’t visit the home states of Democratic holdouts or use his online network to hold major rallies or organize his community to knock on doors.

After the first test of Obama’s new model, he has nothing to show. Had Obama brought 15,000 to the streets in New Orleans for a gun-control rally, Sen. Mary Landrieu might have flinched in her opposition to the president’s agenda. But he didn’t. Had 1,000 Organizing for Action volunteers fanned out across Arkansas to drum up support for the package, Sen. Mark Pryor might have hesitated in bucking the president for fear of a primary challenge. But the doorsteps were empty.

This is just the first test of the president’s new model and he and his team promise that as money flows in and lower-level organizers get up to speed, the president’s army will be ready to march next time.

But there are two challenges here.

First, how do you get people fired up about unsatisfying legislation?

Obama initially promised a whole package of legislation aimed at preventing future mass killings like the December massacre at Sandy Hook Elementary. But “comprehensive” legislation quickly gave way to a resurrection of the old liberal effort to ban guns.

When Senate Majority Leader Harry Reid declared that not viable, the president fell back to supporting universal background checks. He had by that point lost the urgency of the Sandy Hook killings since the measure was unrelated to what happened at the school, as well as other recent mass shootings.

And when that measure looked headed to sure defeat because of worries about a federal firearms registry, Obama fell back again and called for passage of a more limited expansion of background checks that also included an expansion of rights for gun owners.

It’s pretty hard to get people organized for action on legislation that doesn’t address the incident that spurred the vote and is so watered down that liberal activists were hard pressed to even call it better than nothing.

And the same will be true when it comes to the other looming challenges of the year, immigration and a budget. Getting people to march on behalf of a convoluted measure that doesn’t match their activist aspirations sounds pretty implausible. And those two issues are far more complicated than gun control.

Second, when does Obama have the time?

The list of urgent challenges facing the president doesn’t allow him to be crisscrossing the country to hold rallies. But his ground troops, like the donors who are funding Obama’s continuing campaign effort, aren’t going to show up for just a Tweet or a Web video. They want the man himself, not some campaign aide deputized by Obama to round up the posse.

And it won’t do for the president to be away from Washington pushing his personal agenda on one narrow issue when a bomber is on the loose in Boston, the North Koreas are fueling up rockets, somebody is sending poisoned envelopes to Senators and the economy is teetering again.

Obama could use his celebrity and network to bring 15,000 to Jackson Square to make Landrieu worry, but he can’t do it when the rest of the country is expecting him to be dealing with issues of urgent concern for those beyond his political base.

But unless Obama can promise some penalty for the Democrats who refuse his demands, defections will only increase as elections draw nearer.

Note well that Sen. Michael Bennett, the Colorado Democrat, longtime Obama ally and said to be a favorite of the president, was one of those who voted against the core provision of the president’s plan: a restoration and expansion of the Clinton-era ban on civilian weapons mocked up to look like military firearms.

The ban on what gun-control advocates call “assault weapons” only mustered 40 votes. And while this measure was always considered a reach, it is a long-sought aim of the Democratic left. Bennett, who doesn’t face voters again until 2016, opposing that measure was a strong signal that there would be limited intra-party consequences for opposing Obama on the issue.

Nine Democrats rejected the only measure on offer in the Senate that would have arguably diminished the death toll in Newtown, Conn.: restrictions on high-capacity magazines. The defectors here included several usually reliable Obama allies like Sen. Mark Warner of Virginia and Sen. Jon Tester of Montana.

The president says he will keep pushing for gun control. But whipping up pressure against Democratic incumbents could mean multiple primary challenges and increase Republican chances of taking control of the Senate. Whatever Reid says, it seems unlikely that he will want to endanger his majority status by bringing more difficult votes to the floor.

As Democrats buck the president on key votes, openly criticize his signature health law and shrug off his budget plan, there seems to be little worry on the blue team about the president’s demands. That seems unlikely to change following the first major failure of Obama’s second-term agenda.

“If you’re going to make all of these emotional appeals, you’ve gotta show that if this had been law, it would have stopped Newtown. It would not have. It’s irrelevant. I wouldn’t have objected, I might’ve gone the way of McCain or Toomey on this, but it’s emotional blackmail to say ‘You have to do it for the children.’ Not if there’s no logic in this, and that I think is what’s wrong with the demagoguery that we’ve heard out of the president on this issue.”