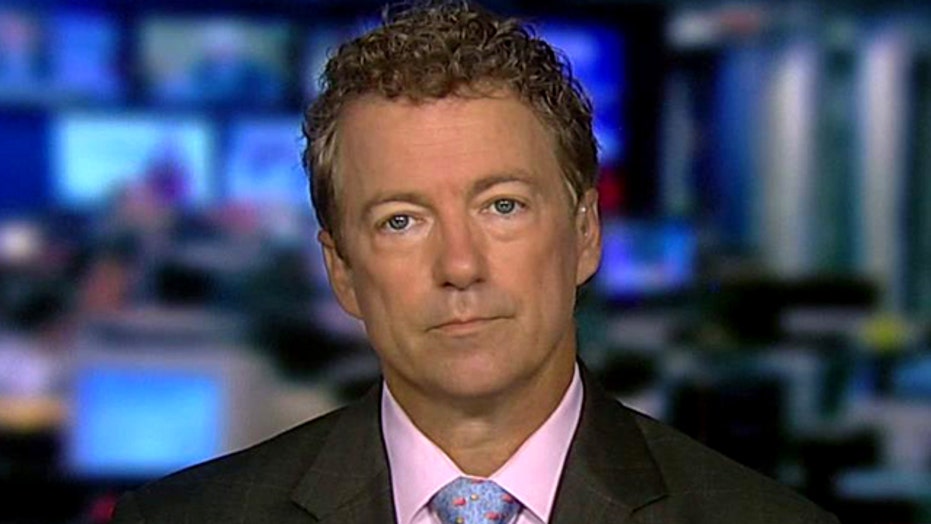 Republican senator reacts to criticism of motives in privacy fight

The National Security Agency's ability to collect the phone records of millions of Americans in bulk expired late Sunday after the Senate failed to strike a deal before the midnight deadline.

However, that program, as well as several other post-9/11 counterterrorism measures, were likely to be revived in some form in the coming days after Senate Majority Leader Mitch McConnell, R-Ky. reluctantly embraced a House-passed bill that would extend the anti-terror provisions, while also remaking the bulk collection program.

Members of the GOP-controlled chamber had returned to Capitol Hill for a rare Sunday afternoon session in a last-ditch effort to extend the NSA’s authority to search for terror connections and to authorize two other programs under the Patriot Act, which took effect in the weeks after the 2001 attacks.

The Senate attempted to either pass the House bill, known as the USA Freedom Act, or simply extend the bulk collection program.

The 100-member chamber passed the first of two procedural hurdles, known as cloture, to proceed with the House bill, known as the USA Freedom Act. The vote was 77-17.

The majority leader had preferred to extend the current law. But with most senators opposed to extending the current law unchanged, even for a short time, McConnell said the House bill was the only option left other than letting the NSA program die off entirely.

"It's not ideal but, along with votes on some modest amendments that attempt to ensure the program can actually work as promised, it's now the only realistic way forward," McConnell said.

"We shouldn't be disarming unilaterally as our enemies grow more sophisticated and aggressive, and we certainly should not be doing so based on a campaign of demagoguery and disinformation launched in the wake of the unlawful actions of Edward Snowden," McConnell said, referring to the former NSA contractor who revealed the agency's bulk data collection program in June 2013.

But no final action was taken before the deadline after Sen. Rand Paul, R-Ky., served notice that he would use Senate rules to delay a final vote for several days.

“The people who argue that the world will come to an end and we will be overrun by jihadists (by not passing the bill) are using fear,” Paul, a 2016 presidential candidate, said on the Senate floor.

Paul's moves infuriated fellow Republicans and they exited the chamber en masse when he stood up to speak after the Senate's vote on the House bill.

Sen. John McCain, R-Ariz. complained to reporters that Paul places "a higher priority on his fundraising and his ambitions than on the security of the nation."

Paul led a similar, filibuster-like effort before Congress left for Memorial Day recess to block votes on the House bill, USA Freedom Act, or extend the current laws. On Sunday, he asserted that ""People here in town think I'm making a huge mistake. Some of them I think secretly want there to be an attack on the United States so they can blame it on me."

Paul had openly contemplated changing his mind on the issue before departing for the Memorial Day recess. But on Saturday he released a statement saying: "I will force the expiration of the NSA illegal spy program. Sometimes, when the problem is big enough, you just have to start over."

In addition to the bulk phone collections, the two lesser-known Patriot Act provisions that also lapsed at midnight were one, so far unused, to help track "lone wolf" terrorism suspects unconnected to a foreign power. The second allows the government to eavesdrop on suspects who continually discard their cellphones.

The USA Freedom Act, backed by the White House, extends those two provisions unchanged, while remaking the bulk collection program over six months by giving phone companies the job of hanging onto records the government could search with a warrant.

Late Sunday, White House Press Secretary Josh Earnest issued a statement saying "The Senate took an important -- if late -- step forward tonight. We call on the Senate to ensure this irresponsible lapse in authorities is as short-lived as possible. On a matter as critical as our national security, individual senators must put aside their partisan motivations and act swiftly."

Even if the Senate had agreed on Sunday just to extend the current law, the House was not in session and could not approve it and send it in time to the president.

To ensure the NSA program has ceased by the time authority for it expires at midnight, the agency began shutting down the servers that carry it out at 3:59 p.m. ET Sunday.

That step would have been reversible for four hours. After that, completely rebooting the servers would take about a day.

Sen. Mike Lee, R-Utah, also is critical of the program and joined Paul in his first filibuster-like efforts.

"The American people deserve better than this, especially when it comes to a program that is an integral part of protecting our national security," Lee, a Senate Armed Services Committee member, said on CNN's "State of the Union."

However, he still predicted the House plan would pass by Wednesday.

CIA Director John Brennan said earlier Sunday on CBS’ “Face the Nation” that terrorists "are looking for the seams to operate within" and that ending the programs is “something that we can't afford to do right now."

He also said “too much political grandstanding and crusading for ideological causes … have skewed the debate on this issue," a likely reference to last weekend’s filibuster-like efforts by the Libertarian-minded Paul and other Senate Republicans.

Presidential candidate and Vermont Independent Sen. Bernie Sanders on Sunday told NBC’s “Meet the Press” that he didn’t vote for the original Patriot Act, nor its reauthorization and that he considers companies holding the records “the best of a bad situation.”

Civil libertarians have argued that the surveillance programs have never been shown to produce major results.

Paul's presidential campaign is aggressively raising money on the issue.

A super PAC supporting him produced a video casting the dispute as a professional wrestling-style "Brawl for Liberty" between Paul and Obama -- though Paul's main opponent on the issue is McConnell.

Fox News’ Chad Pergram and Kara Rowland and the Associated Press contributed to this report.