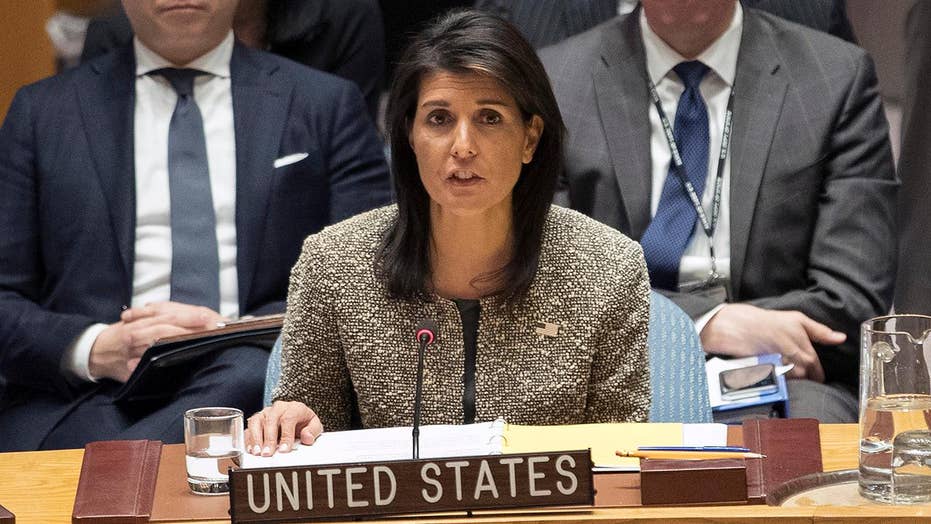 Haley: US deeply committed to achieving a peace agreement

U.S. ambassador to the United Nations speaks at a special Security Council session on Jerusalem.

During a tense emergency meeting of the UN Security Council, Haley and her Israeli counterpart, Danny Danon, were surrounded by voices warning of the dire consequences the president’s decision would have on the Middle East peace process. But both were steadfast in defending Trump.

Haley said three presidents delayed the decision in the hope that a peace process “would produce results – results that never came.”

“For 22 years, the American people have overwhelmingly supported that position, and they have waited . . . and waited,” she said. “This week, President Trump finally made the decision to no longer deny the will of the American people.”

Ambassador Haley said the U.S. was aware of the concerns the decision would raise.

“The United States took this step in full knowledge that it will raise questions and concerns. Our actions are intended to help advance the cause of peace,” she said. “We must recognize that peace is advanced, not set back , when all parties are honest with each other. Our actions reflected an honest assessment of reality.”

United States ambassador to the United Nations Nikki Haley addresses the U.N. Security Council meeting on the situation in the Middle East, including the Palestine, at the United Nations Headquarters in New York, U.S., December 8, 2017. REUTERS/Brendan McDermid - RC1C584979C0 (REUTERS)

Haley also took a shot at the UN for its negative role in the peace process, saying the world body has been one of the “world’s foremost centers of hostility toward Israel.”

She accused the UN of doing more to damage the prospects for Middle East peace than to advance them.

“We will not be a party to that,” she said. “The United States no longer stands by when Israel is unfairly attacked in the United Nations.”

Haley said the U.S. would not tolerate lectures by countries that “lack credibility” on Israeli-Palestinian issues. She made clear what President Trump’s decision does not do – namely it does not take a position on borders or boundaries. The issue of sovereignty over Jerusalem will still need to be decided by both sides and the United States, she said, was not “predetermining final status issues.”

The United Kingdom’s U.N. ambassador, Matthew Rycroft, was one of many who made clear their disagreement with President Trump’s policy. He called it “unhelpful to the prospects of peace in the region.”

Palestinian Ambassador Riyad Mansour said the U.S. decision means it could lose its position as the main facilitator of peace talks.

“The U.S. decision to reward Israelis impunity undermines and essentially disqualifies its leadership role to seek peace in the region,” he said.

He went on to say that the decision was in direct contravention of Security Council resolutions and the consensus of views regarding Jerusalem, saying it had “heightened tensions and risks complete destabilization of this volatile situation, with far-reaching consequences.”

Danon, Israel’s ambassador to the UN, pulled out an ancient coin found on the Temple Mount in Jerusalem dated from the year 67 A.D. with the Hebrew words “Jerusalem the Holy” inscribed on it. He thanked Trump and his administration for the decision.

He addressed council members, telling them Trump’s decision showed the “United States had the courage, and the sound moral judgment, to right these historic wrongs. They recognized Jerusalem as the capital of the State of Israel.”

“The announcement on Wednesday revealed a sad truth about some people around the world. The people who threaten to ignite a wave of violence against Israel and Jews everywhere,” Danon said. “The people who claim they want peace, but whose actions speaker louder than their words.”

Following the meeting, Mansour, the Palestinian representative, told reporters that he expects a draft resolution to come up in the next few weeks asking the U.S. to rescind its position.