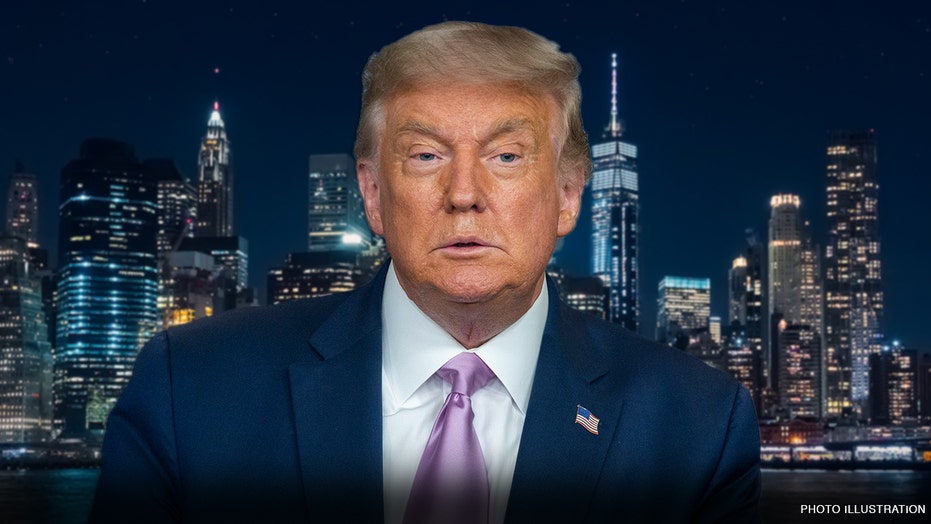 On Friday night, Trump spoke to members of the New York City Police Benevolent Association (PBA), an organization that represents 24,000 officers, at his golf club in Bedminster, N.J. Trump was formally endorsed by the group.

PBA President Pat Lynch said it was the first time he could recall the group ever endorsing a president.

"I have 36 years on this job, 21 as the president of this fine organization. I cannot remember when we’ve ever endorsed for Office of the President of the United States, until now. That's how important this is," Lynch said.

"I've admired you my whole life, watched you do a job like nobody else, nobody else done it. Best of the best and I’m grateful happy you're here," the president said to the group of officers in attendance.

He mentioned his brother, Robert, who he visited in a New York City hospital Friday. "He's having a hard time, but he respected you like I respect you."

He again repeated his law-and-order message, telling the crowd “No one will be safe in Biden’s America.”

"This guy has been taking your dignity away and your respect," Trump said of former Vice President Joe Biden. "And I'm telling you on Nov. 3 you’re going to be getting it back."

New York Democrats said the police union’s endorsement of such a highly unpopular politician within the city was exacerbating tensions between them and the community.

“NYPD union endorsed Trump. I’m sure this is part of their neighborhood outreach plan,” tweeted Rep. Alexandria Ocasio-Cortez, whose district spans the Bronx and Queens.

“Also, does anyone else see a potential problem with police unions - enforcement arms of the state with lethal weapons - promoting “preferred” candidates for office or is that just me?” she added.

“I’m speechless. NYC is a beautifully diverse, working class, democratic city. The NYPD is clearly showing they are not interested in working with the people of our city,” tweeted Jamaal Bowman, a progressive newcomer who overthrew longtime Rep. Elliot Engel in a June primary.

“This explains their continued aggression against innocent people. It’s time for dramatic change,” he said.

New York City cops have faced a campaign against them in the wake of police brutality protests following the death of George Floyd.

As New York politicians cut $1 billion from the police budget among other police reforms, crime has spiked throughout the city. In July 2020, there were 244 shootings in New York, a 177 percent increase from the 88 which occurred last July.

Crimes such as murder, burglary and grand larceny auto also rose, but crimes such as rape, robbery and assault fell.

Meanwhile, Mayor Bill de Blasio and the city council recently barred officers from using chokeholds and other forms of restraint to detain suspects.

TRUMP SAYS NYC WAS 'SO GOOD' BEFORE HE LEFT, NOT SO MUCH ANYMORE

At the same time, state lawmakers passed a law to publicly disclose the disciplinary records of police officers accused of misconduct.

On July 31, Lynch met with the president at the White House to discuss the crime problem.

“In our city, we’re going through a difficult time. We have a progressive mayor that’s anti-police; the city council that’s anti-police; and the statehouse is anti-police. So they’re changing the law where it’s becoming impossible to do our job,” Lynch told the president, as reported by the New York Post.

“And remember what our job is: to keep folks safe. You do that by helping the good people, going after the bad people. They’re stopping us from doing that.”