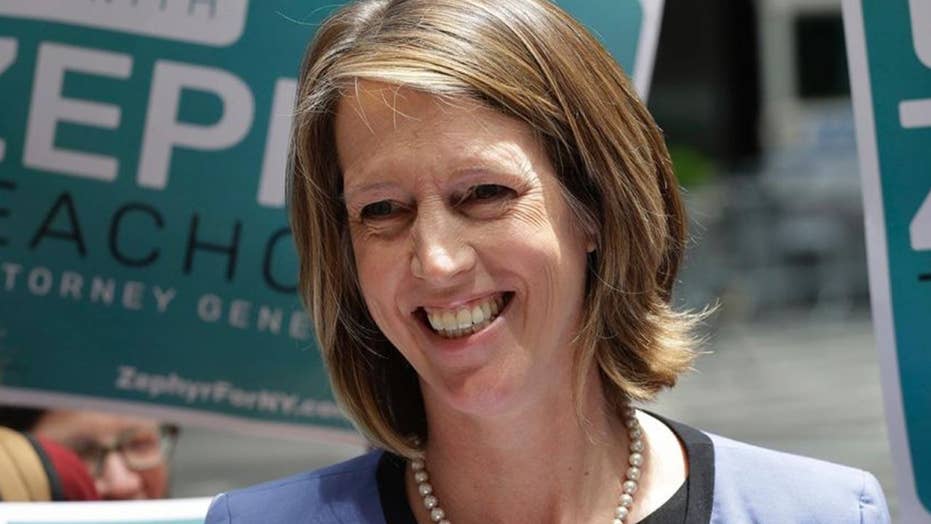 A New York attorney general candidate wants to abolish the U.S. Immigration and Customs Enforcement agency – and if she’s elected, she said she’ll “prosecute” it too.

Zephyr Teachout, who is running as a Democrat, said ICE has “become a tool of fear and illegality” in a video for Now This News where the Fordham University law professor stressed her support for abolishing the agency.

“As attorney general, I will continue to speak out against ICE. I will prosecute ICE for their criminal acts,” Teachout said. “We have stories of consistent abuse within ICE.”

“The idea that we can call this 'law enforcement' is a real offense to the idea of law itself,” Teachout continued.

Teachout isn’t the only Democrat – especially in New York – who has gotten behind the movement to abolish ICE, the agency that was created in the wake of the 9/11 terrorist attacks that killed nearly 3,000 people in the U.S. in 2001.

Sens. Bernie Sanders of Vermont, Kirsten Gillibrand of New York and Elizabeth Warren of Massachusetts have expressed desires to dismantle ICE. Cynthia Nixon, who is challenging New York Gov. Andrew Cuomo in the September primary, has also said ICE, which she called a “terrorist organization,” should be dissolved.

A LOOK AT THE DEMOCRATS WHO WANT TO ABOLISH ICE

“ICE has to be abolished. And I say that as somebody who is running for one of the top law enforcement jobs in the country,” Teachout said in the video. “I think it’s critical that law enforcement speak out and say this is a tool of cruelty, unconstitutional behavior, illegality.”

Teachout unsuccessfully challenged Cuomo in the 2014 gubernatorial primary. Now, she is one of a handful of Democrats vying for the attorney general position since Eric Schneiderman, a Democrat, resigned in May after multiple women accused him of assault.

The New York attorney general primary election is on Sept. 13.