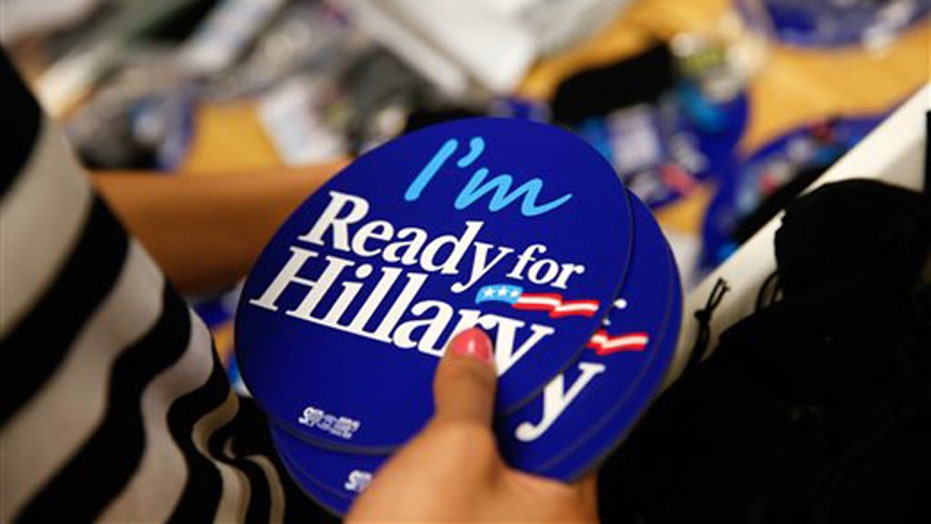 A new book about the lives of first families, as told by White House workers, spans 10 administrations -- but it's the lurid tales from the Clintons' tumultuous eight-year stay that are capturing all the attention.

The anecdotes are contained in “The Residence: Inside the Private World of The White House” by Kate Andersen Brower, whose book dropped just as Hillary Clinton is poised to announce her expected presidential campaign.

The book chronicles such behind-the-scenes incidents as:

The tale appearing to draw the most attention, though, involves an injury the president sustained at the White House.

In the book, a former staffer recalls getting a frantic call at the height of the Lewinsky scandal from a maid who “found blood all over the first couple’s bed.” The incident was explained away by President Clinton, who required stitches after the incident, as the aftermath of him running into a bathroom door in the middle of the night.

But not everybody on staff was convinced.

“We’re pretty sure she clocked him with a book,” the anonymous worker says.

Brower, a former White House reporter and Fox News producer, reported the incident occurred at about the time the public learned of President Clinton’s extra-marital relationship with intern Monica Lewinsky, which was in January 1988.

However, the butlers appeared well aware of the roughly 18-month affair long before it was exposed. They frequently saw the young Lewinsky in the family movie theater and other parts of the residence, with one whispering, “That’s her -- that’s the girlfriend,” Brower writes.

Brower also writes that staffers, including 35 named in the book’s foreword, have fond memories of President George H. W. Bush and first lady Barbara Bush, including the president playing horseshoes with employees, and that they sympathized with the Obamas, being the first African-American family to live in the executive mansion.

“The maids really sided with her,” Brower said Monday night on Fox News’ “The Kelly File.” “She had the president sleeping on the sofa.”

Former White House maid Betty Finnery, now 78, recalls in the book: “You just felt bad for the entire family. You could feel the sadness.”

Brower writes that White House florist Ronn Payne says he was riding in a service elevator once and heard the first lady yell “goddamn bastard” at the president, and then a heavy object being heaved across a room.

“The rumor among the staff was that she threw a lamp,” Brower writes. The butlers, according to Payne, were told to clean up the mess.

Payne also recalls to Brower the time he was walking through the residence’s second-floor private kitchen and an agent walked in behind him to escort Clinton daughter Chelsea to Sidwell Friends, the private school she attended in northwest Washington.

Payne says Chelsea was on the phone and told a friend. “Oh, I’ve got to go. The pigs are here.”

Payne says the agent turned crimson and told the young woman, “My job is to stand between you, your family, and a bullet. Do you understand?”

Clinton replied: “Well, that’s what my mother and father call you,” according to the book.

Staffers also said in the book that the Clintons, known for their privacy, reworked the building's phone lines so they could sidestep the switchboard operators.