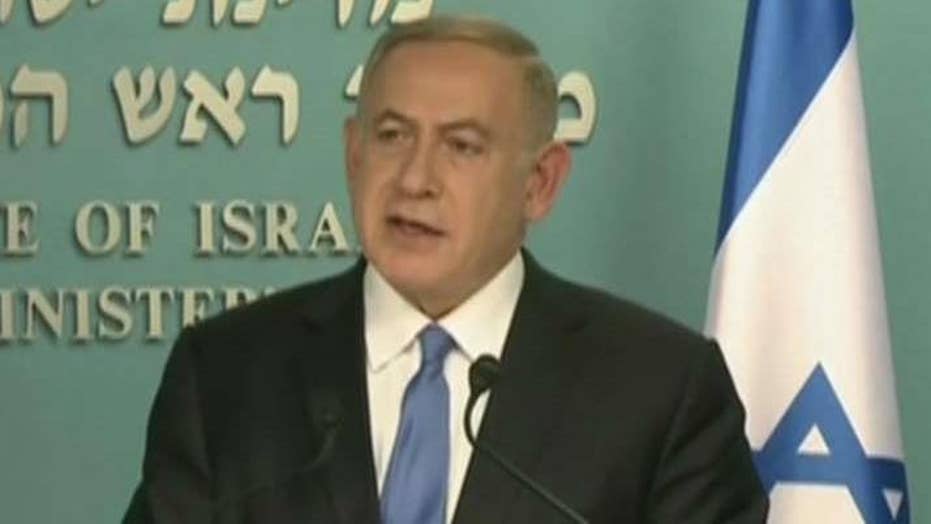 Netanyahu: Israelis do not need to be lectured about peace

Israel Prime Minister Benjamin Netanyahu on Saturday expressed his support for President Trump’s controversial plan to build a wall along the U.S.-Mexico border, saying the barrier he built along his country’s southern border “stopped all illegal immigration” and was a “great idea.”

Trump on Wednesday signed executive actions to start the construction of a continuous, “physical” wall, making good on a campaign promise to keep out illegal immigrants from Mexico, particularly “rapists” and drug dealers.

"Beginning today, the United States of America gets back control of its borders," Trump declared. "We are going to save lives on both sides of the border."

Trump has forged ahead on the wall promise, despite Mexico refusing to pay the bill, as Trump said it would.

Wall construction is projected to cost $8 billion to $20 billion, with Congress scrambling for ways to promptly find the money.

The president's executive orders also call for hiring 5,000 additional border patrol agents and 10,000 more immigration officers, though the increases are subject to the approval of congressional funding.

“President Trump is right,” tweeted Netanyahu, who is trying to forge a better relationship with Trump than the one he had with previous President Obama. “I built a wall along Israel's southern border. It stopped all illegal immigration. Great success. Great idea.”

The southern wall in Israel -- completed in 2013 after two years of construction and paid for by Israel -- is not the West Bank barrier, built to end terror attacks launched from Palestinian Arab cities.

The barrier was built because Israel was facing problems from the influx of tens of thousands of African illegal immigrants through Egypt -- mostly from Eritrea, Sudan, Ethiopia, Ivory Coast and Nigeria and seeking employment and asylum.

Many of the immigrants were escaping the atrocities in Darfur, but their arrival also coincided with an spike in crime, more burden on the Israeli health system and other social problems.

Those coming into the U.S. from the south are seeking better economic conditions and include people fleeing El Salvador and other parts of Central America, ravaged by poverty, violence and other consequences of the region’s drug wars.

The Associated Press and Fox News' Jonathan Wachtel contributed to this report.