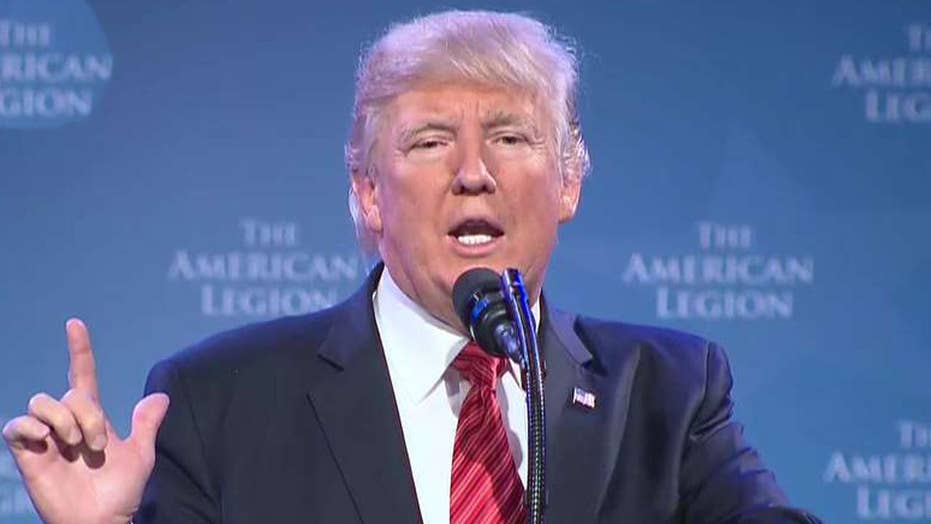 President Trump: We are defined by our shared humanity

The president urges unity in a speech to the American Legion

Several high-profile moderate Republicans have begun publicly speculating about the possibility that President Trump could face a primary challenger when he seeks re-election in 2020.

The latest Republican to do so is U.S. Sen. Jeff Flake of Arizona. Trump and Flake have recently exchanged words, with the president saying he is “not a fan of” Flake.

During an interview Wednesday on Georgia Public Broadcasting, Flake said Trump seems to be “inviting” a primary challenge.

"I think he could govern in a way that he wouldn't,” Flake said. “But, I think that the way that -- the direction he's headed right now, just kind of drilling down on the base rather than trying to expand the base -- I think he's inviting [a challenge]."

"(T)he direction he's headed right now, just kind of drilling down on the base rather than trying to expand the base -- I think he's inviting [a challenge]."

Flake, who has been promoting a book that’s critical of the president, knows something about getting primaried: Trump has expressed support for Kelli Ward, a former Arizona GOP state lawmaker who is challenging Flake in next year’s U.S. Senate race.

But Flake isn’t the only Republican talking about a competitive Republican primary in 2020.

Earlier this week, Sen. Susan Collins of Maine, who irked the president by not voting for ObamaCare repeal legislation, criticized Trump’s response to the white supremacists involved in the violence in Charlottesville, Va.

Appearing on MSNBC, Collins was asked if she believes Trump will be the Republican nominee in 2020.

NBC’s Willie Geist reported last week that “sources close” to Ohio Gov. John Kasich, who unsuccessfully sought the Republican nomination for president in 2016, say there is an growing sense of “moral imperative” to primary the president in the wake of the Charlottesville violence.

Asked about the report during an appearance on CNN on Sunday, Kasich denied planning a campaign against Trump at this point.

“I don’t have any plans to do anything like that,” Kasich said. “I’m rooting for him to get it together. We all are. We’re like seven months into this presidency.”

“I’m rooting for him to get it together. We all are. We’re like seven months into this presidency.”

Even with the next presidential election more than three years away, the president has ramped up political activity in recent months, including holding several campaign-style rallies and a fundraiser in June at his Washington hotel.

"Of course he's running for re-election,"  White House press secretary Sarah Huckabee Sanders said at the time of the fundraiser.