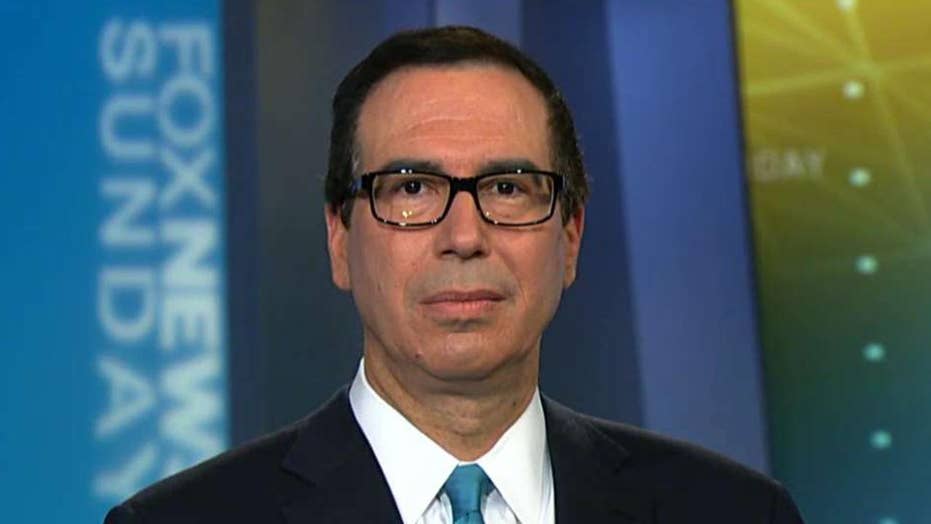 Mnuchin on how trade talks with China impact summit with Kim

Treasury Secretary Steven Mnuchin on the Trump administration's efforts to avert a trade war with China and denuclearize North Korea.

Treasury Secretary Steve Mnuchin said Sunday that the U.S. and China -- the world’s two biggest economies -- have reached a tentative deal to cut trade deficits that includes the U.S. putting China tariffs on hold, an agreement that potentially averts an economic standoff that would have global impact.

“We have made very meaningful progress, and we agreed on a framework,” Mnuchin told “Fox News Sunday” after weekend talks in Washington with Chinese officials about cutting the U.S. trade deficit with China, which last year reached $337 billion. “We’re putting the trade war on hold.”

Mnuchin, who was the country’s lead negotiator in the talks, said the tariffs will be put on hold while the countries try to execute the framework agreement.

Mnuchin also said the tentative agreement includes China buying “substantially” more U.S. goods to cut the deficit, structural changes to the Chinese economy to help make the U.S. more competitive in that market and “protections on technology, which have been very important to the president.”

Trump, since his 2016 presidential campaign, has argued that the United States must renegotiate trade agreements with China and other countries to become more competitive in the global economy. And he has complained about China violating international property laws.

Trump on Friday called the existing U.S.-China agreement "bad for our country” and said, “We're changing it around."

On Saturday, the White House said, in what it called a joint statement, that the U.S. and China had agreed to take steps to reduce the deficit.

The statement essentially highlighted the same points Mnuchin mentioned Sunday and that next steps include the U.S. sending a team to China to work out the details.

China's President Xi Jinping prepares to deliver his opening speech at the Boao Forum for Asia Annual Conference in Boao in south China's Hainan province, Tuesday, April 10, 2018. Xi promised to cut auto import taxes, open China's markets further and improve conditions for foreign companies in a speech Tuesday that called for international cooperation against a backdrop of a spiraling dispute with Washington over trade and technology. (Naohiko Hatta/Kyodo News via AP) (Kyodo News)

“The key to a strong agreement is protecting our intellectual property here in America and stopping the Chinese from keeping out our best goods until we hand over our trade secrets and know-how in such things as required joint ventures,” said Schumer, D-N.Y. “The joint statement has nothing specific on those fronts, and no amount of immediate and short-term purchases of American goods will make up for that.”

Schumer also argued that the tentative agreement announced Saturday did not address the issue of Chinese phone-maker ZTE violating U.S. sanctions on doing telecommunications business with Iran and North Korea.

Mnuchin said Sunday : “This is an enforcement issue. It’s not a trade issue.”