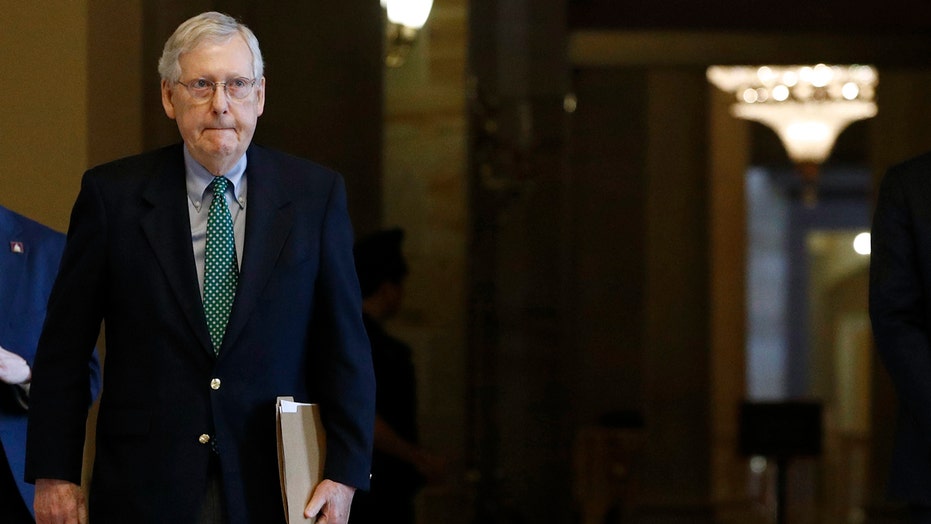 Sen. Majority Leader Mitch McConnell slammed his Democratic challenger Amy McGrath's new ad against him as a “racist” attack against his wife.

In a campaign ad, McGrath claims that trade deals brokered by McConnell “made China richer, their military stronger, they’re spying on us and they didn’t stop the coronavirus.”

“Oh, and Mitch made millions from China,” McGrath’s ad continued.

The Kentucky Republican’s rebuttal ad claimed that “nobody is tougher on China” than he is and the ad was actually a “racist attack on Mitch McConnell’s wife Elaine Chao.”

McConnell said in a statement the ad was “probably the worst” of many racially tinged attacks he and his Chinese-American wife, who serves as transportation secretary, had suffered.

“Elaine and I have suffered no shortage of racially tinged political attacks since we’ve been married, but this ad is probably the worst,” McConnell said. “My wife has spent decades serving her country, and although her family looks a little different than Amy McGrath’s, I can assure her that they are every bit as American.”

A Washington Post fact check found the claim that McConnell made his millions from deals he brokered in Congress to be worthy of “three pinnochios.” McConnell’s wife, Chao, inherited vast sums of money and also earned a significant income on her own, serving on various corporate boards. Chao's family owns a New York-based shipping company, the Foremost Group, that moves bulk goods in Asia.

“In other words, McConnell got rich because he married well, not because of deals he cooked up in Washington,” the Washington Post found.

McConnell is no stranger to ads targeting his relations with China, while he claims the attacks racially exploit his marriage. In one example in 2018, West Virginia GOP Senate hopeful Don Blankenship released a “Ditch Mitch” ad declaring “Swamp captain Mitch McConnell has created millions of jobs for China people.”

“While doing so, Mitch has gotten rich,” Blankenship adds in the ad. “In fact, his China family has given him tens of millions of dollars.”

In 2014, a Democratic operative from Northern Kentucky tweeted about McConnell’s wife’s Asian background.

"Hey Mitch, nothing against your wife and spouses should be off limits; since you mentioned, She isn't from KY, she is Asian," Kathy Groob, who owned Democratic political consulting firm November Strategies, tweeted.

A Quinnipiac survey from earlier this month found McConnell, who has led Senate Republicans for 13 years and served in the chamber for 35 years – with 49% support, compared with 44% for Democratic challenger Amy McGrath, a former Marine fighter pilot.