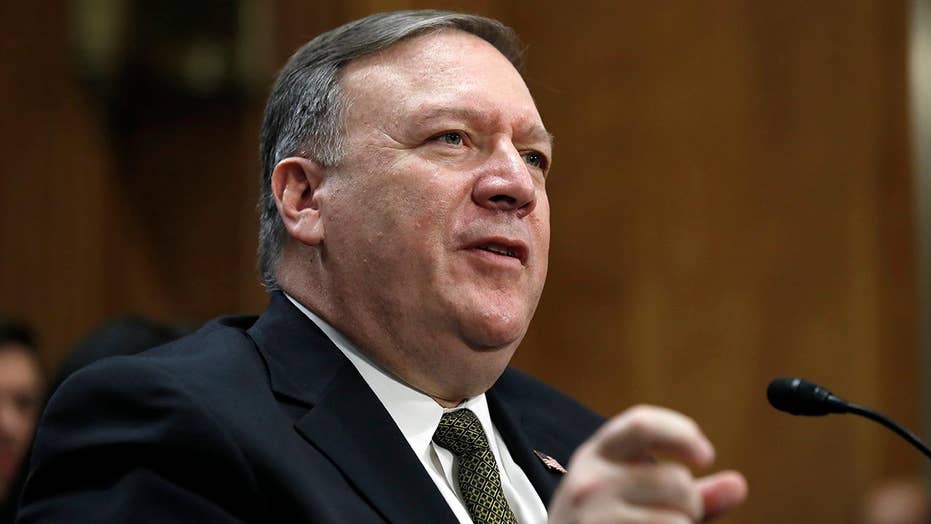 President Trump's pick to be the next secretary of state says the U.S. should work for peace, but prepare for the alternative; Rich Edson reports from Capitol Hill.

CIA Director Mike Pompeo, President Trump’s pick to be the next secretary of state, told his Senate confirmation hearing Thursday that he wanted to continue to “push back” against aggressive moves by Russia.

“If I am confirmed as secretary of state I can assure you this administration will continue as it has for the past 15 months to take real actions, to push back, to re-set the deterrence relationship with respect to Russia,” he said.

Pompeo cited sanctions and the expulsion of diplomats as proof of the administration's tougher stance on Russia.

In his prepared remarks, he had warned that Russia has been acting “aggressively” and represents a danger to the U.S.

At the hearing, Pompeo also rejected reports that he was a hardliner or a hawk, saying that “there’s no one like someone who has served in uniform who understands the value of diplomacy and the terror and tragedy that is war.” Pompeo's military career included serving as a cavalry officer patrolling the Iron Curtain before the fall of the Berlin Wall, according to his White House biography.

“It is the last resort, it must always be so. I intend to achieve the president's policy by diplomacy rather than by sending our young men and women to war,” he said. “I know I'm serving a president who feels the same way.”

Pompeo’s entrance to the committee room was met by anti-war protesters, who wielded signs and yelled “No Pompeo, no more war.” One protester was removed from the hearing when she interrupted the procedure.

On Russia, Pompeo was grilled by Sen. Bob Menendez, D-N.J., on conversations he was reported to have had with Trump about FBI Special Counsel Robert Mueller’s Russia probe.

Pompeo declined to be drawn into discussing what he had discussed with Trump, but said the president had never asked him to do anything “improper.” He did say that he had met and spoken with Mueller but declined to talk about the investigation and other questions related to the probe.

Pompeo said he would also prioritize filling what he described as “demoralizing” vacancies that festered under former Secretary of State Rex Tillerson, whom Trump fired last month.

On the 2015 Iran nuclear deal, Pompeo said he wants to “fix this deal.”

Pompeo wouldn't say explicitly if he'd advocate a withdrawal if there's no fix by Trump's May 12 deadline, suggesting there could be an extension if significant progress was being made by then. Still, he affirmed that he won't support staying in over the long term unless more restrictions are placed on Tehran.

Still, he acknowledged that Iran, technically speaking, is not violating the terms of the 2015 accord between the U.S., Iran and other world powers, adding: "I have seen no evidence that they are not in compliance."

As the hearing wrapped up, Menendez recited a series of contradictory statements from Pompeo on issues ranging from the Iran deal to gay marriage before wondering aloud: "Which of the Mike Pompeos am I being asked to vote on?"