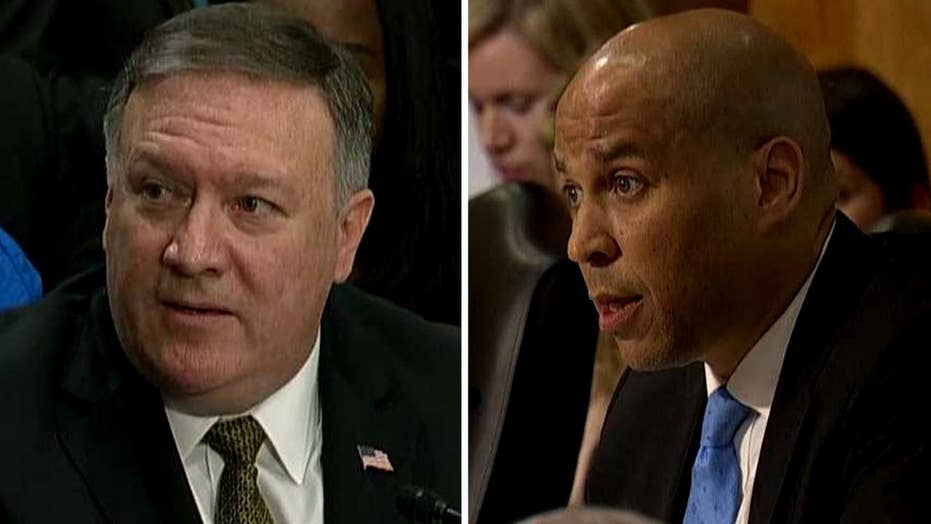 Challenged by Sen. Cory Booker at his Senate nomination hearing, President Trump's pick for secretary of state Mike Pompeo says he continues to hold the view that it is inappropriate for same-sex couples to marry, but stresses he treats all individuals with the same respect.

During his secretary of state confirmation hearing, CIA Director Mike Pompeo refused to say whether he thinks same-sex relationships are a “perversion” when pressed multiple times and said he stood by his earlier views against gay marriage.

“When I was a politician, I had a very clear view on whether it was appropriate for two same-sex persons to marry. I stand by that,” Pompeo, vying to be the nation’s top diplomat, responded during the Thursday hearing.

As a congressman, Pompeo opposed the U.S. Supreme Court ruling that legalized gay marriage in 2015.

“Senator, I continue to hold that view,” Pompeo said.

Pompeo was also questioned about his beliefs on same-sex marriage in January 2017 during his Senate confirmation hearing to become the CIA director. Then, Sen. Kamala Harris, D-Calif., asked Pompeo if he would treat every CIA employee “in a way that is appropriate and equal” to which Pompeo agreed.

He assured Booker during his secretary of state confirmation hearing that his “respect for every individual, regardless of their sexual orientation, is the same.”

“You’re going to be representing this country and their values abroad in nations where gay individuals are under untold persecution, untold violence. Your views do matter,” Booker said.

Earlier, Booker pressed Pompeo on if he saw people who worshipped “other gods,” particularly Muslims, as “negative.” Pompeo pointed to his “exquisite” record of treating people with respect, despite their religious beliefs.

Pompeo also told Booker Muslims have a special “opportunity” with how they respond to terrorist attacks. He said some people are “better positioned” to respond to “certain types of violence.”

Trump nominated Pompeo to be secretary of state in March to replace Rex Tillerson.