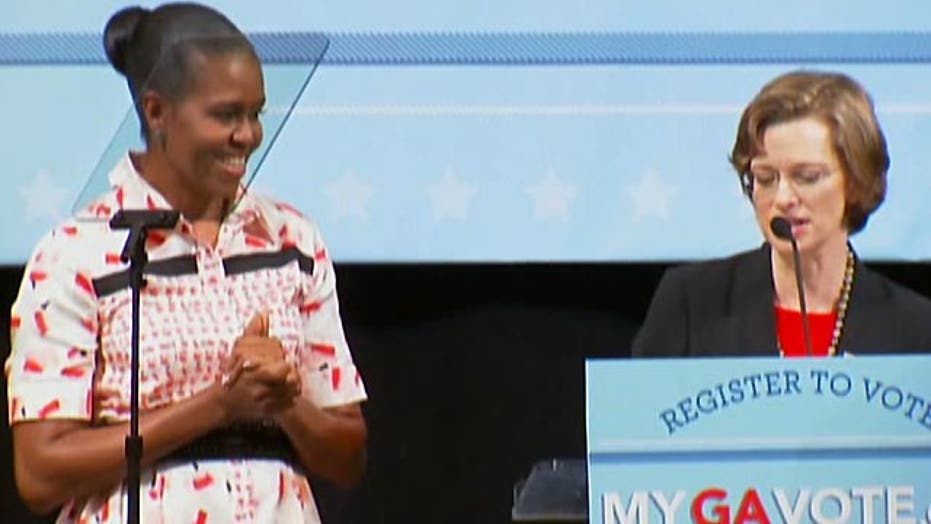 DES MOINES, Iowa – Democratic candidates finally have found an Obama they're not afraid to be seen with.

While President Obama dutifully avoids battleground races this midterm season, first lady Michelle Obama is tiptoeing into the fray in a bid to drum up votes for party allies in tight contests.

The president's better half stumped for the first time in a 2014 race earlier this month, hitting the trail for Georgia Senate Democratic candidate Michelle Nunn. And she's expected to travel to Iowa soon in support of Senate candidate Rep. Bruce Braley.

The logic behind dispatching the first lady isn't hard to grasp. While the president's approval ratings are hovering around 40 percent, rendering him political Kryptonite to Democrats in tough races, Michelle Obama's are considerably higher -- 62 percent, according to a summertime Pew Research Center survey.

"They are looking for an A-lister they can find except for President Obama," said Amos Snead, former spokesman for former-House GOP Whip Roy Blunt (now a senator). He added: "I think it's telling that of the two, six years into a presidency, the first lady is the only one who can go out there with them."

He said the goal is to fire up voters, and turn out those who normally do not show up in non-presidential elections.

During Michelle Obama's visit for Nunn, she largely avoided controversial topics like foreign affairs. She focused instead on the importance of voting and the effects a Republican sweep at the polls could have on the remaining two years of the Obama administration.

In Iowa, where Democratic nominee Braley is in almost a dead heat with Republican state Sen. Joni Ernst, the first lady's visit could help rev up a race which has no clear frontrunner. Braley also came under fire back in June for an ad against Ernst that critics called sexist -- Michelle Obama could help shore up his numbers among female voters.

The first lady's planned visit to Iowa in October has been confirmed by the White House and Braley campaign, though few other details have emerged.

Yepsen said the first lady's late-in-the-race appearances come at "the right time," for a "greater impact." He says if the Democrats had tried to tout her a few months ago, the hype would have been lost by election time. Her timing now falls when parties are pushing voter registration and early voting. "It's a good time ... these are less motivated voters, they haven't been paying attention earlier," he said.

However, Republican strategist Tim Albrecht, former communications director for Iowa Gov. Terry Branstad and current director of Redwave Digital in Des Moines, believes the first lady won't have the impact Democrats are hoping for, calling it a "pipe dream."

He said an appearance by the president would be an "anchor" to any Democrat's campaign, and the first lady's appearance in Iowa is little more than an attempt to get much-needed positive press for Braley.

Jehmu Greene, Fox News contributor and past president of the Women's Media Center and Rock the Vote, said she's not surprised that Democrats are using the first lady instead of the president to rally support.

"Michelle has some of the highest [approval ratings] and will absolutely help these candidates accomplish what they're trying to do in last few weeks before election," said Greene. "The bottom line is with where we are in the world and what is on the president's plate, I certainly want him behind his desk in the Oval Office."

Greene said she hopes Michelle Obama's "rock star" status can "connect, rally, inform, and inspire" voters. "Democrats have more voters on their side, the problem is in midterm elections, our voters don't turn out," she said.

Braley told FoxNews.com in June that he would welcome the president to Iowa. However, Obama hasn't yet hit the campaign trail in Iowa or other states with close Senate races.

Republicans need to pick up six seats in November to flip control of the U.S. Senate, and many are invoking Obama to try and drag down their opponents.

Yepsen said Mrs. Obama has been able to keep her poll numbers steady because "she's stayed above the fray." Unlike former first lady Hillary Clinton who dealt more in "policy fights," and "made some enemies," Michelle Obama pushes causes like childhood obesity, which finds few critics aside from those who complain about changes in school lunches.

"President Obama's in the typical six-year slump, but [Michelle's] numbers have stayed pretty good. She's respected. She's admired, and she's a role model. I think it can do a lot of good with excitement and buzz. I think it'll do a lot of good for Braley," Yepsen said.