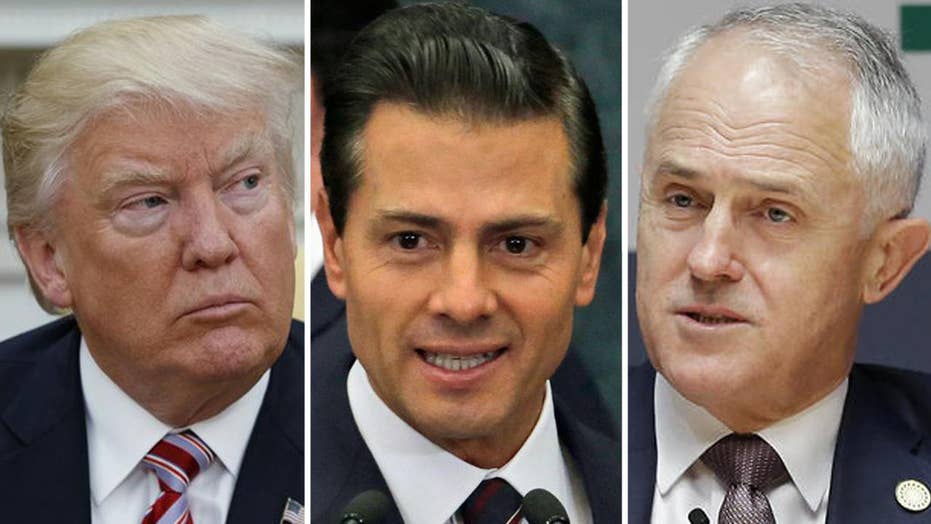 A day before Attorney General Jeff Sessions is set to discuss a new leak crackdown, the transcripts of two heated January phone calls President Trump held with foreign leaders spilled into the headlines.

The Washington Post reported, based on those leaked documents, that Trump pressured Mexican President Enrique Peña Nieto on Jan. 27 to stop publicly saying his government would not pay for a border wall. The report also aired new details over the president’s infamously tense phone call the next day with Australian Prime Minister Malcolm Turnbull.

Both phone calls were widely reported in February, in one of the first major leaks out of the Trump administration that have since become a constant headache. But the Post claimed Thursday to have obtained the full transcripts, which reportedly were “produced by White House staff” and based on records kept by White House note-takers.

The reported transcripts give a fuller picture of what went down on those calls.

According to the Post, Trump got on Peña Nieto’s case about vows to never pay for his promised border wall.

“You cannot say that to the press,” Trump said, according to the Post.

Trump reportedly said the money issue “will work out in the formula somehow … it will come out in the wash, and that is okay” – but if the Mexican leader insists on saying he won’t pay, “then I do not want to meet with you guys anymore because I cannot live with that.”

Trump reportedly called the wall “the least important thing we are talking about, but politically this might be the most important.”

The call with Turnbull broke down over Trump’s disappointment with a U.S. agreement from the Obama administration to take refugees from Australian detention centers.

“This is going to kill me,” he reportedly told Turnbull. “I am the world’s greatest person that does not want to let people into the country. And now I am agreeing to take 2,000 people.”

He called the deal “horrible” and said, “I hate taking these people … I guarantee you they are bad.”

He warned the refugees could “become the Boston bomber in five years,” according to the report. Holding nothing back, Trump told the Australian PM this was “the most unpleasant call all day.”

The report comes as Sessions is expected to discuss efforts to crack down on leaks during a press conference Friday.

The announcement may provide more of an overview of what the DOJ hopes to accomplish rather than specific prosecutions at this stage, Fox News is told.

Last month, a report written by Republicans on the Senate’s homeland security panel warned that the Trump administration faced an “alarming” amount of media leaks that posed a potential threat to national security. The 24-page report, titled “State Secrets: How and Avalanche of Media Leaks is Harming National Security,” estimated the Trump administration has had about one leak per day.

The White House also has battled internally to plug the leaks. Anthony Scaramucci had vowed to tackle the problem when he was named communications director, but he was ousted Monday as Chief of Staff John Kelly took over.