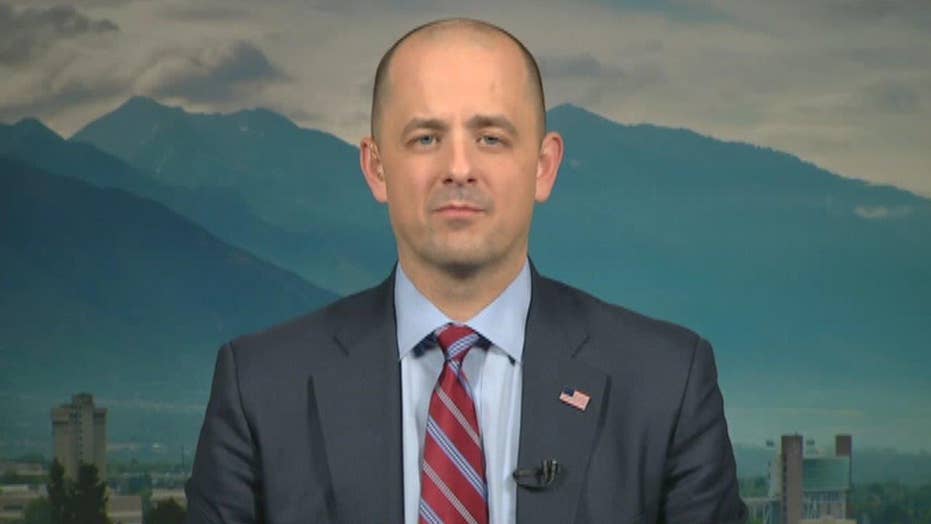 Amid the raucous final phase of the presidential battle between Hillary Clinton and Donald Trump, independent candidate Evan McMullin has quietly crept into contention in the overlooked state of Utah – a development he hopes could lead to an Electoral College deadlock.

The former CIA operative is little-known elsewhere in the country and is only on the ballot in 11 states. But an apparent voter backlash in Mormon-heavy Utah against the two major-party candidates has fueled a surge for McMullin – a Mormon and Utah native – in state polls. A new Emerson College poll released Wednesday even had McMullin in first place, 4 points ahead of Trump, 31-27 percent, with Clinton at 24 percent.

“He captured the perfect storm in terms of timing,” said Jason Perry, director of the Hinckley Institute of Politics at the University of Utah, citing the “disgust” state voters have toward the two major-party candidates.

One may ask of McMullin’s efforts – to what end?

The candidate is devoting his time and resources to Utah right now, but has a bigger strategy in mind. His presidential hopes rely on one extremely unlikely and unprecedented scenario: win enough electoral votes to hold Trump and Clinton below the 270 threshold needed to win the presidency outright. An Electoral College deadlock would throw the responsibility of electing a new president to the House of Representatives.

To do that, McMullin would need to not only pick up Utah’s six electoral votes but hope Trump wins virtually every key battleground such as Florida, Ohio, North Carolina, Arizona and Virginia – states where, save for Ohio, Clinton leads, according to RealClearPolitics averages.

His strategy relies on a Trump surge (that falls just short of victory) as well as a Utah win for himself. Even the latter would be historic; a McMullin win would mark the first time the state has broken from the Republican nominee since 1964.

McMullin is optimistic his popularity in Utah can also carry over in the final days of the race to other Mountain West states. McMullin says Utah is a state where principle matters over party and is an environment where a conservative alternative to the Republican nominee is viable.

“It’s not a Republican state. It’s a conservative state. That’s true for a lot of the Mountain West and I think our message resonates well there,” McMullin told FoxNews.com.

If he somehow were to pull this off – winning enough electoral votes in a close enough race that neither Clinton nor Trump has 270 -- the top three electoral vote-getting candidates would be presented to the House of Representatives, where each state delegation gets one vote. Though third-party candidates Gary Johnson and Jill Stein may well win a higher share of the popular vote on Election Day, if McMullin is the only one among them to win electoral votes, his name would be sent to Congress along with Clinton and Trump in that scenario.

Perry described McMullin’s plan as “most improbable” but highlighted the importance of his performance in Utah.

“Neither one of the two presidential candidates have done well,” he explained. “He’s capturing the anxiety and disgust that a lot of people have in Utah for both Trump and Clinton.”

McMullin, former chief policy director for the House Republican Conference, is optimistic about his viability in this scenario.

“The formula is not rocket science,” McMullin said of the process. “I am confident that my campaign would be able to compete in that kind of environment.”

In the case of an Electoral College stall, the vice president would be selected by a different process. The Senate would choose the veep from the two running mates with the most electoral votes – almost certainly Tim Kaine and Mike Pence – with each senator casting one vote.

To McMullin, this entire process goes beyond denying Clinton and Trump the presidency. He seeks to make a lasting impact on the conservative movement and make it, in his view, viable for generations to come.

“This opportunity is a new conservative movement that will address liberty and equality, attracting all different kinds of races and religions,” he said. “If we didn’t take a stand now, then we wouldn’t have the legitimacy to fundamentally change the conservative movement.”