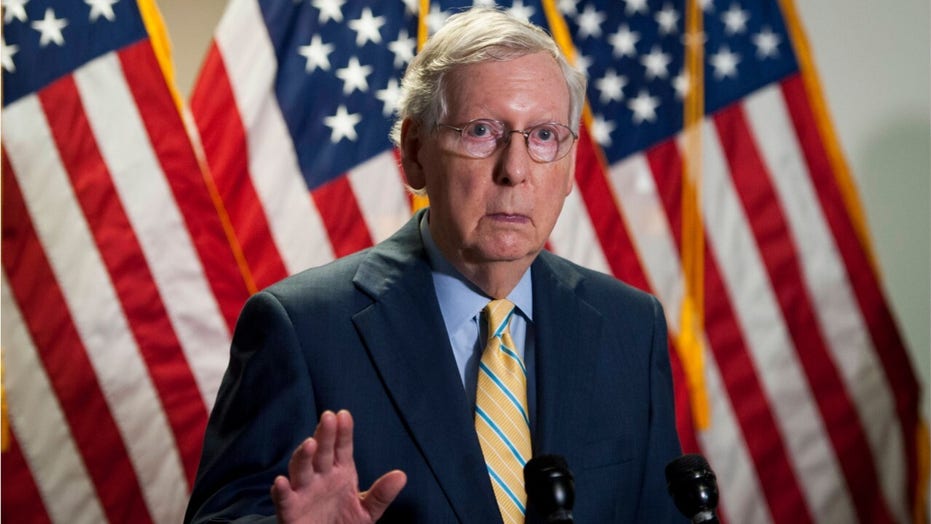 Mitch McConnell wants another round of stimulus checks for Americans

Senate Majority Leader Mitch McConnell, R-Ky., has begun negotiations with top congressional Democrats and the White House on another coronavirus bill. McConnell said he supports another round of stimulus checks for Americans as he believes the 'economy needs another shot of adrenaline.'

Senate Majority Leader Mitch McConnell on Tuesday made clear he supports another round of stimulus checks to Americans. The economy needs “another shot of adrenaline” amid the coronavirus pandemic, he said.

McConnell, R-Ky., has been in negotiations with top congressional Democrats and the White House on what the next coronavirus bill would look like, as the Trump administration is pushing a package with a price tag of $1 trillion.

McConnell said he supports “another round of direct payments” to Americans – something President Trump and top members of his administration have said they, too, support.

“The economy needs another shot of adrenaline,” McConnell said Tuesday. “If we lose control of the virus…everything else will be window dressing.”

Sources told Fox News this week that an emphasis would be put on liability protections and “addressing unemployment insurance in a proper way.”

The key to Republican support for the package is making sure those who are without work do not make more on unemployment than they would if they were working. The additional unemployment benefit of $600 a week approved in the third coronavirus package will expire Aug. 1.

Meanwhile, House Democratic Caucus Chairman Hakeem Jeffries, D-N.Y., said it was "cruel-hearted and callous" to cut off the additional unemployment benefits without extending the program, and a "failure of leadership in the Senate and in the White House."

Jeffries noted the House bill, passed in May, extended those benefits, which he said "is appropriate because the pandemic is not over and in many parts of the country, is just getting started."

As for liability protections, McConnell said he was focused on “creating a safe harbor” for firms, universities and small businesses “if we want any genuine reopening at all.”

“We need to carve out a new normal,” McConnell said. “We can’t go back to April.”

McConnell reiterated that he believed the new plan being pushed by Republicans would score “Democratic support.”

Fox News is told Republicans are looking at $100 billion of the $1 trillion to go to state and local governments; $70 billion of that will go toward helping schools re-open in a safe manner.

“The Senate had led at every step of this process,” he said. “We need to rise to the occasion one more time.”

Meanwhile, Treasury Secretary Steven Mnuchin this week said the administration is “focused on starting with another trillion dollars.”

“We think that will make a big impact,” Mnuchin said Monday, while noting that “the focus is kids and jobs,” and that the goal is to have the package in place by the end of this month.

Mnuchin also said lawmakers are aiming to pass the new legislation before the end of July, when the current “enhanced unemployment insurance” expires.

The administration also supported liability protections, with Mnuchin saying this week that they “want to make sure that frivolous lawsuits don’t prevent schools, universities and businesses from reopening.”

House Minority Leader Kevin McCarthy, R-Calif., also supported that protection, saying businesses “should not have an attack from any lawsuits” as they try to reopen.

President Trump is continuing to push for a cut in the payroll tax – levies that companies pay on behalf of their employees to fund Social Security and other benefits – as part of the package.

Many Republicans are reluctant to approve such a reduction, though, over deficit concerns. However, advocates in the administration believe the payroll tax would jolt the economy quickly.

“That will be in there,” one senior source close to the talks said of the payroll tax, characterizing it as the president’s “number one ask.”