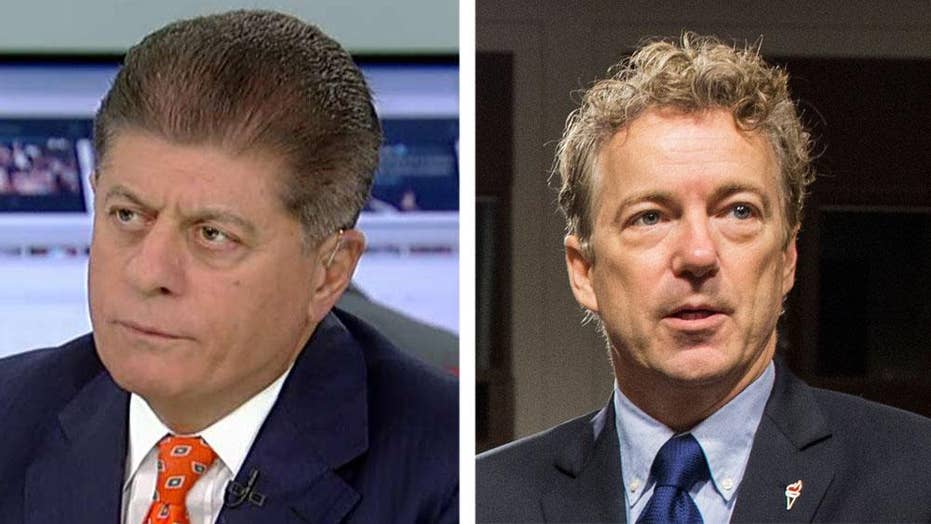 Fox News senior judicial analyst texted with the Republican senator from Kentucky as he recuperates from injuries sustained when a neighbor attacked him.

Senate Majority Leader Mitch McConnell said Tuesday that fellow Kentucky Republican Sen. Rand Paul is expected to return next week to Capitol Hill, as he recuperates from injuries sustained this past weekend when a neighbor attacked him.

“He’s on the mend,” McConnell said. “We expect him back next week.”

McConnell said he has spoken to Paul, who told him his injuries -- including five broken ribs -- “really hurt.”

What exactly happened in the attack is not yet clear. The attorney for the man accused of attacking Paul said Monday that the clash had “absolutely nothing to do” with politics and was a dispute over something “trivial.”

The accused attacker, 59-year-old Rene Boucher, was released on $7,500 bail Saturday and – so far – faces only a misdemeanor charge.

Matthew J. Baker, an attorney for the defendant, said in a statement Monday that his client and the senator have been neighbors for 17 years and were “prominent members of the local medical community and worked together when they were both practicing physicians.”

But in the thick of intense congressional debates over taxes and health care, Baker said politics was not the issue.

“The unfortunate occurrence of November 3rd has absolutely nothing to do with either's politics or political agendas,” he said. “It was a very regrettable dispute between two neighbors over a matter that most people would regard as trivial. We sincerely hope that Senator Paul is doing well and that these two gentlemen can get back to being neighbors as quickly as possible.”

The New York Times reported that the fight may have stemmed from some kind of planting dispute around their properties. It added that Paul was wearing earphones and mowing his lawn when the assault began.

According to the jailer at Warren County Regional Jail, Boucher was released on $7,500 bail Saturday.

“He faces Assault in the 4th degree, minor injury,” Jailer Stephen Harmon told Fox News on Monday, pointing further inquiries to the Kentucky State Police. “Other charges may be pending.”

On Sunday, Paul was recovering from five broken ribs, including three displaced fractures, leaving unclear when he might return to Capitol Hill.

The Kentucky State Police told Fox News they are still running an active and open investigation and just learned of Paul’s condition.

State Police told Fox News on Monday that in Kentucky, there is a statute that considers an assault a felony only if there is serious physical injury.

Boucher's next court appearance is set for Thursday morning.