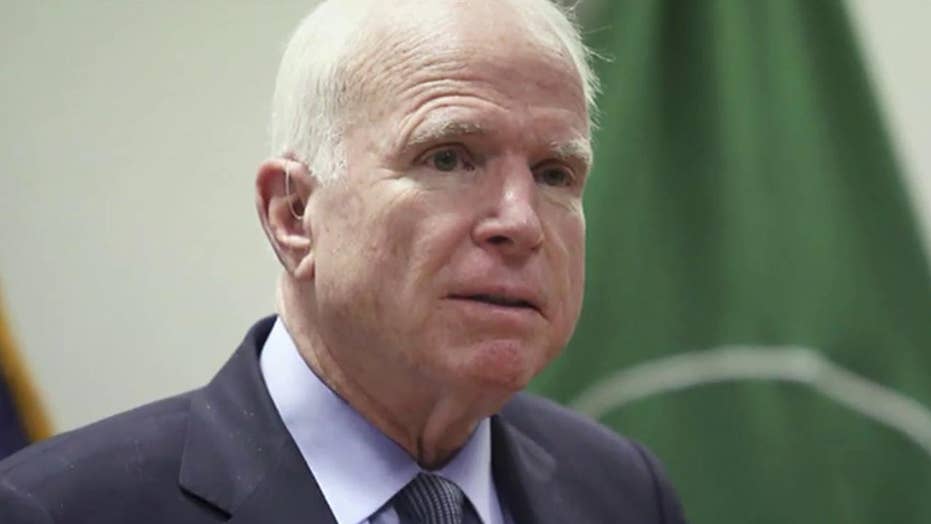 McConnell, R-Ky., released a statement on Saturday night saying that he would defer action on the measure while McCain recovers at his home in Arizona.

"While John is recovering, the Senate will continue our work on legislative items and nominations, and will defer consideration of the Better Care Act," McConnell said.

Surgeons in Phoenix removed a blood clot from above McCain's left eye on Friday. The 80-year-old Senate veteran was advised by doctors to remain in Arizona next week, his office said.

A procedural vote expected in the coming days had been cast as a showdown over the measure designed to replace ObamaCare once and for all.

With a 52-48 majority, Republicans can afford to lose only two votes. Vice President Pence would break a tie for final passage.

Two Republicans, Rand Paul of Kentucky and Susan Collins of Maine, have already said they'll vote against the measure.

Last month, McConnell had to cancel a vote on a previous version of the legislation amid lack of support among GOP senators.

The Senate bill, like legislation passed earlier by the House, repeals mandates requiring individuals to carry insurance and businesses to offer it, and unravels an expansion of the Medicaid program for the poor and disabled enacted under President Barack Obama's law.

Analyses of the earlier version of the Senate bill found it would results in more than 20 million additional uninsured Americans over a decade, compared to the 2010 ObamaCare law.

The newest version attempts to attract conservative support by allowing insurers to offer bare-bone plans alongside more robust ones, but also reaches out to moderates by adding billions in help for the opioid crisis and to defray high costs for consumers.

With the vote set for the coming week now indefinitely postponed, GOP success in its long-promised ObamaCare repeal grows all the more uncertain, despite heavy lobbying in recent days by Trump administration officials.

FILE - In this July 11, 2017 file photo, Senate Armed Services Committee Chairman Sen. John McCain, R-Ariz. listens on Capitol Hill in Washington, during the committee's confirmation hearing for Nay Secretary nominee Richard Spencer. Surgeons in Phoenix said they removed a blood clot from above the left eye of McCain. Mayo Clinic Hospital doctors said Saturday, July 15 that McCain underwent a "minimally invasive" procedure to remove the nearly 2-inch (5-centimeter) clot, and that the surgery went "very well." They said the 80-year-old Republican is resting comfortably at his home in Arizona. Pathology reports are expected in the next several days. (AP Photo/Jacquelyn Martin, File) (AP)

Democrats are unanimously opposed as are the nation's major medical groups and insurers.

McCain was reported to be resting comfortably at his home in Arizona.

Pathology reports on the clot were expected in the next several days.

McCain, is a three-time survivor of melanoma. Records of his medical exams released in 2008 when he was the GOP candidate for president showed that he has had precancerous skin lesions removed and had an early-stage, squamous cell carcinoma, an easily cured skin cancer, removed.

He was reelected in November to a sixth Senate term.