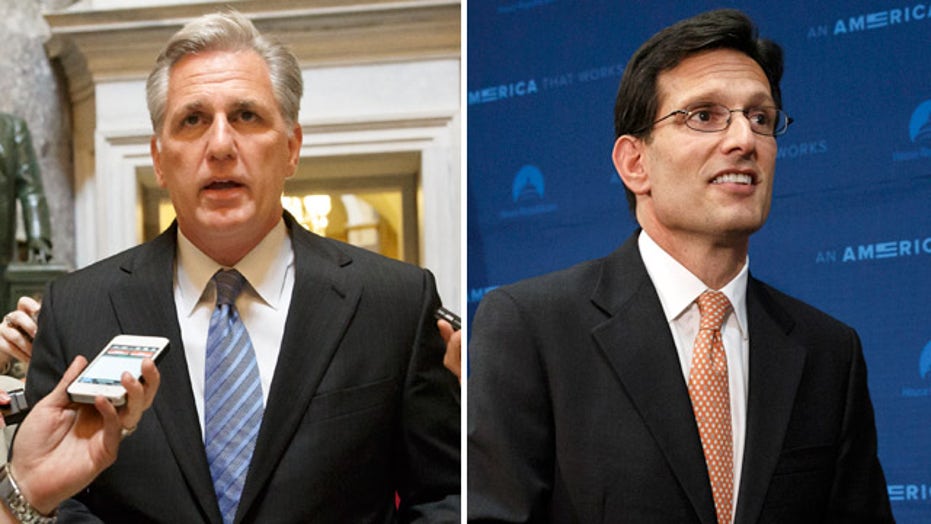 Rep. McCarthy likely to succeed Cantor after rivals bow out

Rep. Pete Sessions has bowed out of the race to become the next House Majority Leader, leaving House Majority Whip Kevin McCarthy the sole candidate to succeed Rep. Eric Cantor.

Sessions, R-Texas, said he decided to discontinue his bid because it became clear to him that to run a successful campaign he “would have created unnecessary and painful division within our party.

“At this critical time, we must remain unified as a Republican Conference,” Sessions said in a statement. “As always, I stand ready and willing to work with our team to advance the conservative agenda that the American people demand and deserve.”

Unless another challenger emerges, McCarthy will become House Majority Leader by acclimation in the leadership election on June 19.

Since Cantor’s stunning primary loss Tuesday and subsequent announcement he would step down from his leadership post, McCarthy and his deputies have aggressively rounded up votes with a pitch to southern Republicans and pointed private conversations on the House floor.

McCarthy, R-Calif., is not viewed as the conservative or the Tea Party choice in the conference, and speculation had mounted whether a more conservative challenger would prove to be a serious challenge to his victory.

However, a senior House GOP source told Fox News Thursday that Sessions was asked to bow out for the good of the order. The source said that members of the Texas GOP delegation were concerned they were getting into a contest where they could lose future influence or favored assignments if they bet on the wrong man and lost.

Texas GOP Sen. Ted Cruz’ refusal to formally support Sessions’ bid further made some House members even more wary of backing him, according to the source.

The focus now turns to the race for House Majority Whip, the position McCarthy currently holds. Rep. Steve Scalise, R-La., Rep. Peter Roskam, R-Ill., and Rep. Marlin Stutzman, R-Ind., are in the running for the third top spot in the GOP leadership.

Scalise is the chairman of the Republican Study Committee, a group of more than 160 GOP lawmakers considered the most conservative in the House. Roskam is an attorney and chief deputy whip who recently was tapped by Boehner to serve on the select committee investigating the deadly 2012 attack on the U.S. diplomatic mission in Benghazi, and served with President Obama in the Illinois legislature. Stutzman is a fourth-generation farmer and Tea Party favorite who was elected to the House in 2010 and has often has pushed for an uncompromising approach on the GOP agenda.

Cantor announced Wednesday he will step down from the top GOP post on July 31 after losing the Virginia Republican primary for his House seat to a little-known Tea Party-backed challenger.