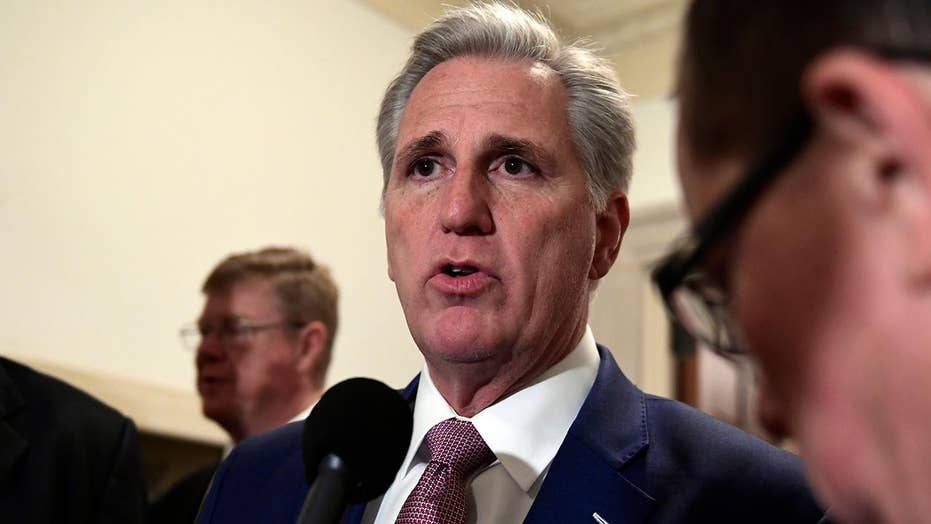 During a closed-door session with House Republicans, the California lawmaker took a decisive victory against Jordan, bringing in 159 votes to the Ohio representative’s 43 votes.

McCarthy was initially elected to the House in 2006 and has served as the House majority leader since 2014. Jordan is a prominent member of the House Freedom Caucus and an ally of President Trump.

McCarthy "knows what he needs to do," said GOP Whip Steve Scalise, the Louisiana Republican who was gravely wounded in last year's congressional baseball practice shooting. On Tuesday, Scalise unanimously won re-election to the No. 2 spot as whip.

"You always look in the mirror and see what you can do better," Scalise said Tuesday. Republicans, he said, "need to do a better job of letting people know what we stand for."

McCarthy takes over the role of GOP leader in the House with the retirement of current House Speaker Paul Ryan, R-Wis., and at a time when Republicans will be the minority party in the lower of Congress for the first time since 2011.

McCarthy enjoyed the backing of the retiring Ryan, who earlier this year called the California Republican the “right person” to lead the party in the House, and also a close relationship with both Trump and Vice President Mike Pence.

The new minority leader has spent much of his political career paying it forward by holding fundraisers and championing the pet bills of other GOP lawmakers.

One issue that was seen as standing in his way to the leadership role was that he is a moderate – some would argue at times liberal – Republican in a party that has in recent years trended farther and farther toward the right. Some members of the conservative House Freedom Caucus cited his moderate views as a reason why he wasn’t selected for Republican leadership during a failed 2015 bid.

This opened up the door for Jordan, a founding member and former chair of the Freedom Caucus, to try to upset McCarthy in the battle for GOP leadership.

While Jordan enjoyed support from members of his own Freedom Caucus - and from having a smaller and more conservative Republican minority in the House - he simply didn't have wide enough support to defeat McCarthy.

“Jordan comes with a lot of baggage,” Bruce Oppenheimer, a professor of public policy at Vanderbilt University, told Fox News. “Republicans now have to work with a Democratic majority and they are going to have to decide if they want somebody who is both substantively more conservative, but also extremely more unreasonable in the leadership.”

The election of Cheney makes her the only woman in House Republican leadership — and has her following in the footsteps of her father, former Vice President Dick Cheney, who won the same post more than 30 years ago.

Cheney is expected to spearhead the House GOP’s communications strategy when Democrats take over the chamber in January. House Republicans are looking for a more forceful approach to communications.

“We’ve got to change the way that we operate and really in some ways be more aggressive, have more of a rapid response,” Cheney told The Associated Press in an interview.

Cheney ran unopposed after the current chair of the conference, Rep. Cathy McMorris Rodgers of Washington, declined to continue in the post.