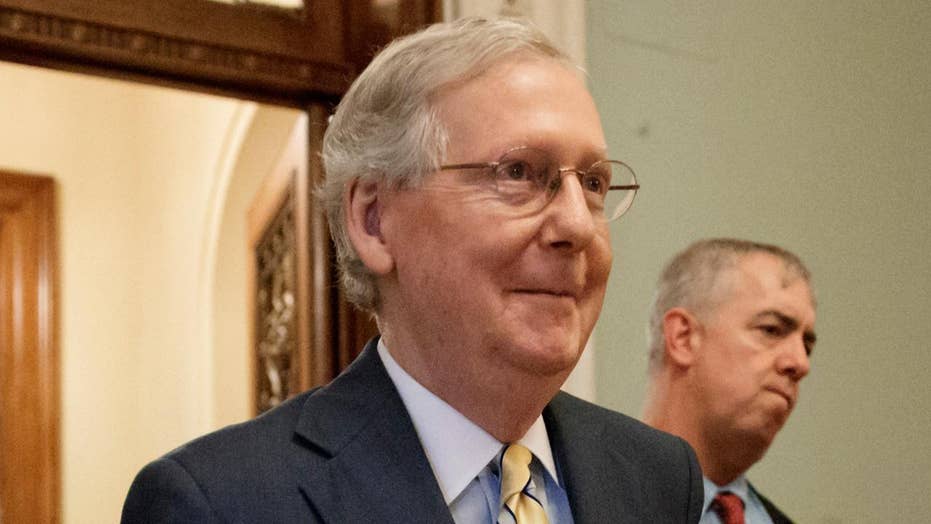 Will health care delay allow McConnell to shore up support?

Most people have no idea what constitutes a “motion to proceed” in the Senate.

But daily life “motions to proceed” help explain what the term means on Capitol Hill.

A boyfriend wants to marry his girlfriend. He drives a few hours late one night to pay his girlfriend’s father a visit. The boyfriend asks permission to have his daughter’s hand in marriage before he pops the question.

That’s a motion to proceed.

You’re ready to buy a home. But first you have to collate all your paperwork, employment history and credit reports so the bank can determine if you are pre-approved for a mortgage.

A motion to proceed.

It kind of works that way in the Senate, too.

Senate Majority Leader Mitch McConnell, R-Ky., planned to “move to proceed” to retool the GOP-controlled chamber’s health care bill this week. The Senate must clear at least one procedural bar to start debate, but cannot advance to the bill without at least a simple majority of votes.

McConnell’s plans went haywire over the weekend when word broke that Sen. John McCain, R-Ariz., had a blood clot above his eye. McCain’s office said doctors performed a “minimally invasive craniotomy” on the senator.

A craniotomy is a procedure in which physicians temporarily remove part of the skull to reach the brain. McCain’s office said the senator is “recovering at home” and that he would remain in Arizona over the coming days.

A couple of hours later, McConnell announced the Senate would “defer consideration” of the health care bill.

McConnell may have wanted to hold a mid-week vote on the Senate’s motion to proceed on health care. Prospects for the Senate having a simple majority willing to start debate was a jump ball at best. But McCain’s confirmed absence reflected one Capitol Hill maxim: You cannot alter congressional mathematics.

You cannot do anything if the math doesn’t work. With McCain out for at least a week, the math was clear: McConnell didn’t have the votes.

There are 52 Republican senators and 48 senators who caucus with the Democrats. McConnell released a revamped health care bill last Thursday. It’s unclear whether the legislation could command the votes to pass. But something else was crystal clear: Senate Republicans were on the cusp when it came to having enough votes on the motion to proceed to the bill.

Republicans could only lose two votes to make a prospective roll call a 50-50 tie. That was OK because Vice President Pence would break the deadlock. Within an hour of Republicans learning of the health care revisions, GOP Sens. Susan Collins, Maine, and Rand Paul, Kentucky, opposed the motion to proceed.

Buttonholed by a phalanx of reporters in the Ohio Clock Corridor off the Senate chamber, Collins said she would “very likely vote no on the motion unless the Congressional Budget Office produced better numbers on Medicaid.

On Fox News, Paul described the updated plan as “ObamaCare lite” and said, “It doesn’t fix the fundamental flaws of ObamaCare.”

So at best, the Senate only had 50 yeas to proceed to the bill. That’s why a yea vote by McCain was so crucial. But McCain made it clear he wasn’t impressed with the new draft.

“The revised Senate health care bill released today does not include the measures I have been advocating for on behalf of the people of Arizona,” he said last week. “I intend to file amendments that would address concerns raised by Arizona Governor Doug Ducey and other leaders across our state about the bill’s impact on Arizona’s Medicaid system.”

“The biggest issue is the motion to proceed,” mused Sen. Pat Roberts, R-Kan. “We’re going to look pretty silly if we don’t.”

And once McCain was out, the calculus flopped.

The Senate would have only 99 senators present: presumably 51 Republicans and 48 Democrats. But already the yeas on the motion to proceed dwindled to a maximum of 49. That’s not a majority of 99. The GOP needed at least 50.

It would be another matter if McConnell flipped Collins or Paul. But they seem dug in for now. Plus, the Senate is a body of comity and tradition. People would look askance at McConnell if he somehow turned Collins or Paul, suddenly had 50 yeas out of 99 and moved ahead. The Senate generally doesn’t engage in “dirty pool.”

Many would argue the Republican leadership took advantage of McCain’s absence to score a legislative victory. Not fair to McCain, to say nothing of Arizona.

Math always matters in Congress. And mathematics seems to hold a particular sway over health care policy. Democrats wielded a 60-40 edge over Republicans in January, 2010 as they tried to usher the final version of ObamaCare to passage.

Sen. Ted Kennedy, D-Mass., died in 2009. Paul Kirk, also a Massachusetts Democrat, was appointed as a placeholder so the party could fend off a GOP filibuster with 60 yeas.

However, in January, 2010, Sen. Scott Brown, R-Mass., unexpectedly prevailed in a special election for that seat. Suddenly Democrats encountered a math problem. They only had 59 yeas. Republicans could filibuster ObamaCare and block Democrats’ efforts to overcome the filibuster with just 41 votes.

That’s why Democrats turned to the special budget process called “reconciliation,” which requires only a simple majority to approve bills.

It was one thing for Republicans to lack 60 votes to undo ObamaCare. It’s another thing when they can’t even cobble together 51 votes just to start the debate.

Health care could be back on the Senate floor next week or whenever McCain returns to the Senate. But his absence reveals how fragile the vote count is at any step of the process.