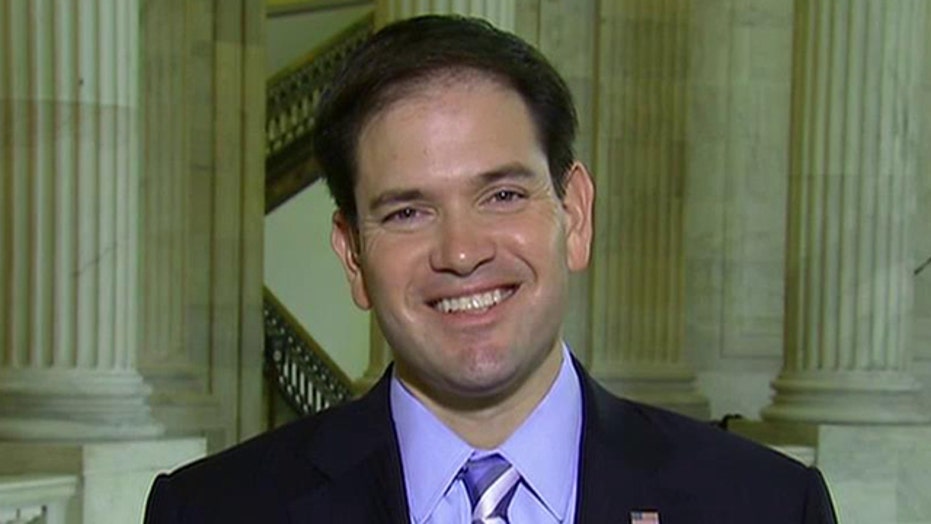 Rubio: 'I feel very confident that I'm ready to do this job'

Faced with the recent history of Hispanic voters overwhelmingly favoring Democratic presidential candidates over their Republican counterparts, Florida Sen. Marco Rubio said Wednesday that he is focused on winning the votes of all Americans not just one particular group.

Speaking to Fox News, Rubio said that his campaign is focused on issues that affect all Americans and not just trying to appease one voting bloc.

"I don't think you can be president of the United States by targeting your message to one group vs. another,” Rubio said. "I don't think the future of our country should be built on helping some people at the expense of others."

Rubio's comments came after he was presented with the stark figures that President Barack Obama was able to get 71 percent of the Latino vote compared to Republican challenger Mitt Romney in the 2012 elections. Obama was also able to pull in 60 percent of the youth vote, while Romney only got 37 percent.

Despite his Cuban-American roots and strong support in the Latino stronghold of South Florida, poll numbers appear to indicate that Rubio faces an uphill battle with Hispanic voters outside his home state.

A Latino Decisions poll released earlier this year – and before any politician had declared their candidacy – found that 59 percent of Latino voters were unlikely to vote for Rubio in the 2016 elections.

One reason some observers say that Rubio does not have the support among Latinos that many argued he could attract is because of his perceived lack of action on immigration reform. Rubio, once a member of the so-called "gang of eight" lawmakers pushing for a bipartisan deal to resolved the issue, has in recent months remained quiet on immigration.

Critics on both sides have attacked Rubio – with conservatives saying his plans for immigration mounted to amnesty for undocumented immigrants, while immigration activists argued that the Florida lawmaker backed down under party pressure.

"That's his Achilles' heel," said Luis Alvarado, a Republican strategist with California consulting firm Revolvis, told the International Business Times. "That will continue to resound until Election Day with all Latinos, and they will make him pay for that."

Questioned about immigration reform on Fox News, Rubio criticized Obama's executive order on immigration and said that any reform needs to be done in a piecemeal fashion.

"We need to do immigration reform and that hasn't changed," Rubio said. "We're not going to be able to do it in one massive piece of legislation and I say that because we tried it and it doesn't work."

Rubio added: "Americans don't trust that the federal government will enforce immigration laws, something that has been proven by the president's executive order."