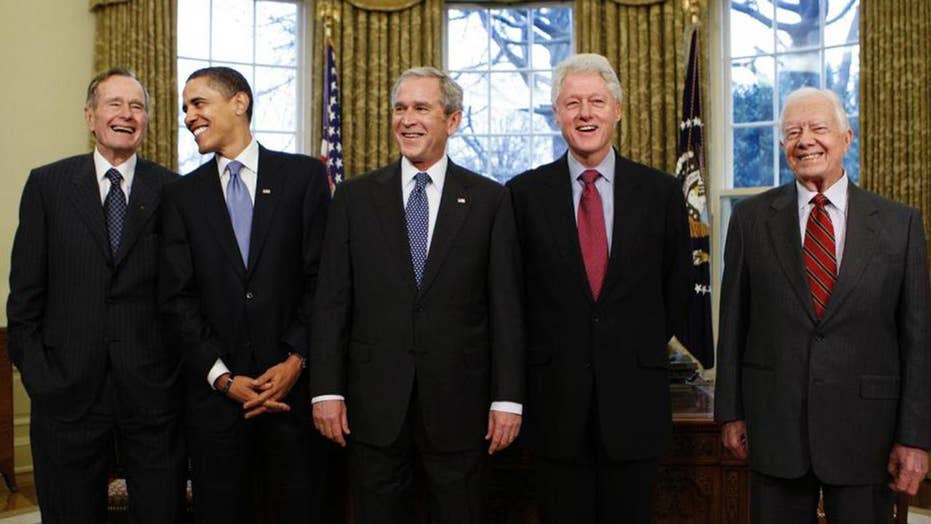 All five living former presidents team up for Harvey relief

Karl Rove and Mike Huckabee react on 'The Story'

All five living former U.S. presidents will gather this month to support hurricane victims at a benefit concert in Texas.

“The 43rd President and I, and our distinguished colleagues in this 'One America Appeal,' are very grateful to these wonderful performers — some of them old friends, some of them new — for giving their time and talent to help the urgent cause of hurricane recovery in Texas, Florida and the Caribbean,” the elder Bush said in a statement. “It’s important that those affected by these devastating storms know that, even if the path to recovery feels like a road that goes on forever, we’re with them for the long haul."

The former presidents said they “were inspired to come together to lend their support to the people and communities affected and to the first responders, organizations, volunteers and neighbors who have been providing assistance to victims.”

The “appeal” has since expanded to fundraise for those affected by hurricanes Harvey, Irma and Maria — the most recent storm which has left at least 34 people dead in Puerto Rico.

The benefit concert, according to a press release, will be hosted by Lee Greenwood and feature the band Alabama, the Gatlin Brothers, Lyle Lovett, Robert Earl Keen, Sam Moore, Yolanda Adams, Cassadee Pope and Stephanie Quayle.

Tickets for “Deep From the Heart” are now on sale at Bush41.org.