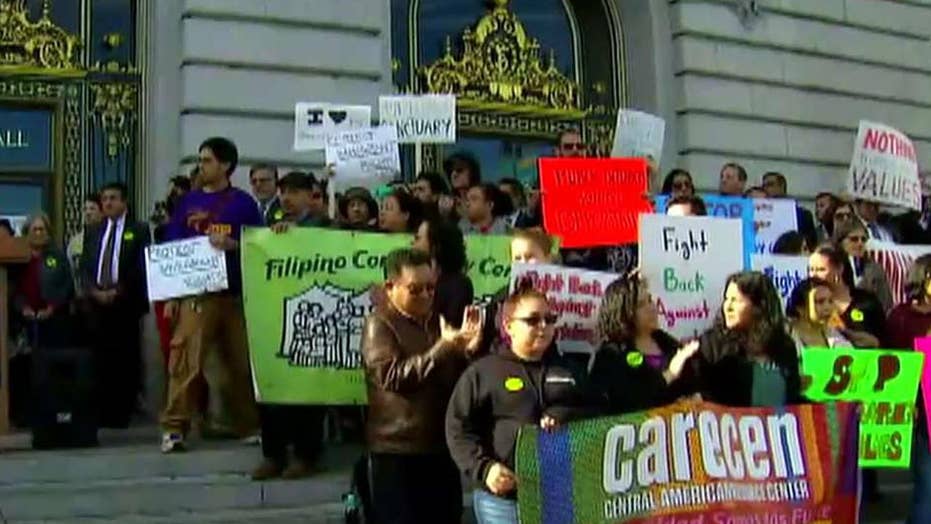 Debate over settlement for illegal immigrant who was arrested; Claudia Cowan reports

Miami-Dade County invited the fury of activists when it became the first in the nation to give up its “sanctuary” status for illegal immigrants – but the decision, it seems, might be paying off.

The statement appeared to refer to an existing grant, noting the money already is being used to boost the local police department’s “intelligence gathering and police operations with investments in technology and specialized equipment.” But the DOJ letter indicates the county’s immigration decision could clear the way for future funding as well.

Gimenez’s decision to drop the county’s sanctuary city status in January sparked outrage at the time from local immigrant advocates who accused the Cuban-born mayor of betraying the county’s tradition of welcoming immigrants.

A few days later, the county commission rejected emotional pleas by some residents and voted 9-3 to support the mayor’s decision.

The commission said it sided with Gimenez because of threats made by the Trump administration to withhold federal funding from cities and counties refusing to cooperate with federal immigration officials to deport people living in the country illegally. The DOJ letter could serve as a message to sanctuary jurisdictions across the country that cooperation means funding.

It comes as cities like Chicago and New York are openly fighting the Trump administration over the policy.

On Monday, Chicago Mayor Rahm Emanuel sued the Trump administration – naming Attorney General Jeff Sessions as a defendant – over the funding threats, prompting the Department of Justice to accuse Emanuel of caring more about protecting illegal immigrants than legal residents in his city.

Chicago stands to lose $3.2 million from the Edward Byrne Memorial Justice Assistance Grants for refusing to cooperate with the feds.

While the showdown over sanctuary cities has been heating up in recent months, a number of smaller communities have quietly shed their status. They include: Dayton, Ohio; Saratoga, N.Y.; Bedford, Pa.; and Finney County, Kan.

Last month, Immigrations and Customs Enforcement also announced that 18 counties in Texas had agreed to work with federal agents to review the immigration status of inmates in their local jails and turn over those suspected of immigration violations.

The 287(g) agreement trains local law enforcement to check if people they have in custody are in violation of U.S. immigration law. The 20-year-old program has expanded under Trump.

Sixty communities now have active 287(g) agreements – twice as many as a year ago, according to ICE officials.