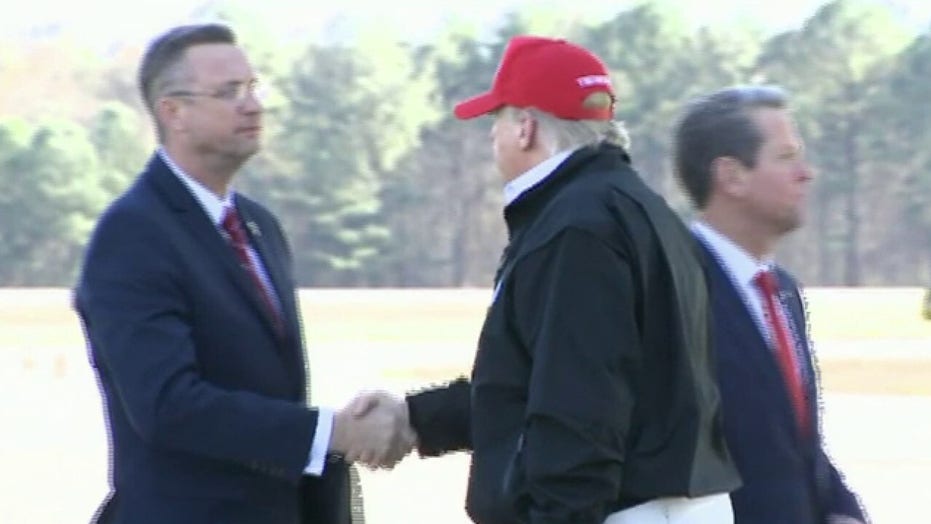 Rep. Collins: Wanted to follow protocol, I currently have no symptoms

Six lawmakers under self-quarantine after contact with potential coroanvirus carrier; Georgia Republican Rep. Doug Collins on his decision to self-quarantine.

House Democrats huddled Tuesday at the Capitol with the House sergeant-at-arms, attending physician and the chief administrative officer and left the meeting preaching vigilance on hand-washing, social distancing and deploying no-touch greetings -- for instance, the Vulcan salute from Star Trek.

In a sign of how serious they are taking the virus, members interviewed by Fox News said they’ve begun screening their visitors. If anyone has a sign of even a cold, they will be asked to stay away and conduct the meeting over the phone.

“Everybody is very anxious,” Rep. Judy Chu, D-Calif., said of the mood on Capitol Hill.

In one of the first visible signs of the coronavirus's expanding reach, 38 House members were missing from Monday's House votes.

While other fly-in days to Washington can have similar absence levels, Monday was unique because at least five House members were gone because of self-imposed quarantines. Reps. Mark Meadows, R-N.C., Doug Collins, R-Ga., Matt Gaetz, R-Fla., and Paul Gosar, R-Ariz., interacted at the Conservative Political Action Conference with someone who was infected.

And Rep. Julia Brownley, D-Calif., closed her D.C. office for the week and self-quarantined after meeting with someone in Washington who tested positive.

Rep. Dean Phillips, D-Minn., marveled at the 38 absences and said members are making decisions based on the interests of their families, staff and personal health. He held a town hall with about 200 people on Sunday and said he now realizes he'll need to limit public gatherings.

“Nobody should feel safe,” Phillips said. “We can just take our best efforts to protect ourselves and those with whom we work and interact. Safety is relative in an epidemic.”

Members who had planned overseas travel next week on congressional delegation trips, known as CODELs, also had their trips scrapped over coronavirus concerns.

“Most of the CODELS have been canceled for next week,” said Rep. Don Beyer, D-Va., who was invited to go on a House Ways and Means Committee trip to Great Britain, Madrid and Poland that was canceled.

Later Tuesday, Beyer announced that he will self-quarantine following a positive test for COVID-19 by a friend in Washington D.C. with whom he and his wife recently had dinner.

While lawmakers interviewed by Fox News stopped short of calling for the Capitol to close in the midst of the outbreak, the politicians were taking serious steps to limit exposure and prepare for the worst-case scenario of their offices closing down.

Should staff need to quarantine, they are getting their offices equipped for teleworking. The House set up a “genius bar” on Monday to make sure office tech is up-to-date for remote work. And the Office of the Chief Administrative Officer ordered 1,500 laptops over the weekend that will be sold to member offices for teleworking.

“We do have to prepare for ultimate social isolation, which is telework,” Chu said.

Another change is that members planning public gatherings in their districts next week said they either had already canceled the events or were rethinking them.

“For us, no town halls,” said Rep. Norma Torres, D-Calif., who canceled a press conference next week in favor of a Facebook Live event. “If we’re going to have meetings it’s going to be under 20 people … to minimize the number of employees who are exposed to anything.”

Lawmakers are grappling with their own mortality too. At the meeting among Democratic members Tuesday morning, they acknowledged the high-risk groups are senior citizens and people with pre-existing conditions -- which includes many members of Congress.

“They keep talking about 60-plus and that’s a lot of us,” said Beyer, 69. “And there are a number of very distinguished members of Congress who are 80 plus, including our majority leader and the chair of our appropriations committee,” Beyer said, referring to Reps. Steny Hoyer, 80, and Nita Lowey, 82. “... People are just worried about how do we protect the older members.”

Still, lawmakers largely wanted to stay in D.C. and voiced support for passing an economic relief package, like extended sick leave and unemployment assistance for workers affected by the coronavirus.

“At this moment we need to be here to make sure that we can take care of the people in our districts and the people in this country,” said Rep. Kimberly Schrier, D-Wash., a pediatrician who called for an “all-hands-on-deck” effort. “As this spreads across the country and evolves, we need to be mindful that we have a lot of senior citizens in Congress with preexisting conditions. We need to think about whether we need to make changes.”

Torres said the lack of knowledge on the scope of the outbreak because of the initial dearth of testing is creating personal panic at home because she had been out sick for two weeks in December.  She hunkered down with her husband on restocking canned goods and supplies and is being careful with hygiene and social distancing.

“My husband is a little bit panicked,” Torres, 55, said. “He’s very worried about my personal health, how I'm getting on planes. It's my job, of course.”

She's not visiting her 5-year-old grandson out of an abundance of caution.

“Although no children have been infected yet, I certainly don't want him to be the first because grandma did not think about him," she said.