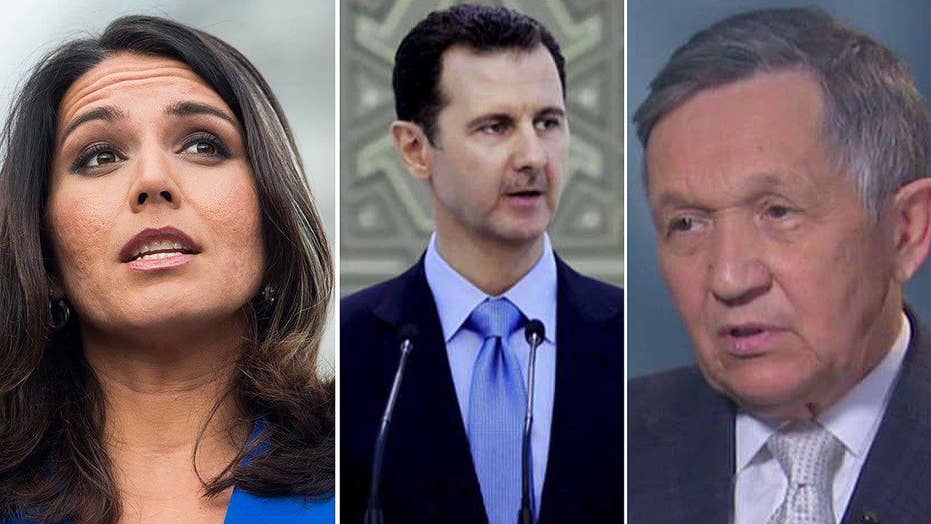 A Hawaii congresswoman who took heat for a recent meeting with Syrian President Bashar al-Assad is blasting President Trump for taking military action in the war-torn country.

Rep. Tulsi Gabbard, D-Hawaii, who met with Assad in January, slammed the president for the administration’s decision to launch an attack of 60 Tomahawk missiles on the Syrian air base Sharyat on Thursday, in response to a chemical weapons attack.

“It angers and saddens me that President Trump has taken the advice of war hawks and escalated our illegal regime change war to overthrow the Syrian government—this escalation is short-sighted and will lead to more dead civilians, more refugees, the strengthening of al-Qaeda and other terrorists, and a direct confrontation between the United States and Russia—which could lead to nuclear war,” Gabbard said in a statement.

“This Administration has acted recklessly without care or consideration of the dire consequences of the United States attack on Syria without waiting for the collection of evidence from the scene of the chemical poisoning.”

Despite her harsh reaction to the administration’s decision to take action in Syria, Gabbard said she would “be the first” to call for Assad to be executed if he was found guilty of ordering the chemical attack on civilians early this week, killing almost 80 Syrian men, women and children.

“If President Assad is indeed guilty of this horrible chemical attack on innocent civilians, I will be the first to call for his prosecution and execution by the International Criminal Court,” Gabbard said.

Gabbard met with Assad in January on a seven-day trip to Aleppo, Damascus and Beirut. According to Gabbard’s office, the trip was approved by the House Ethics Committee, as required by House rules, and was not taxpayer funded.

But Gabbard’s decision to meet with Assad drew criticism from both sides of the aisle.

“An elected official, a representative of the United States, went on a secret trip to meet with the brutal dictator who had murdered nearly half a million of his own people—it’s reprehensible and cannot be justified,” Rep. Adam Kinzinger, R-Ill., said in January. “The actions of Congresswoman Gabbard have put our nation’s reputation and foreign policy concerns at high risk and I couldn’t be more disgusted.”

Meanwhile, Trump's strikes reportedly have angered some on the alt-right fringes. Richard Spencer, a far-right white nationalist who supported Trump’s campaign, even hinted at supporting Gabbard as a 2020 candidate, according to The New York Times.