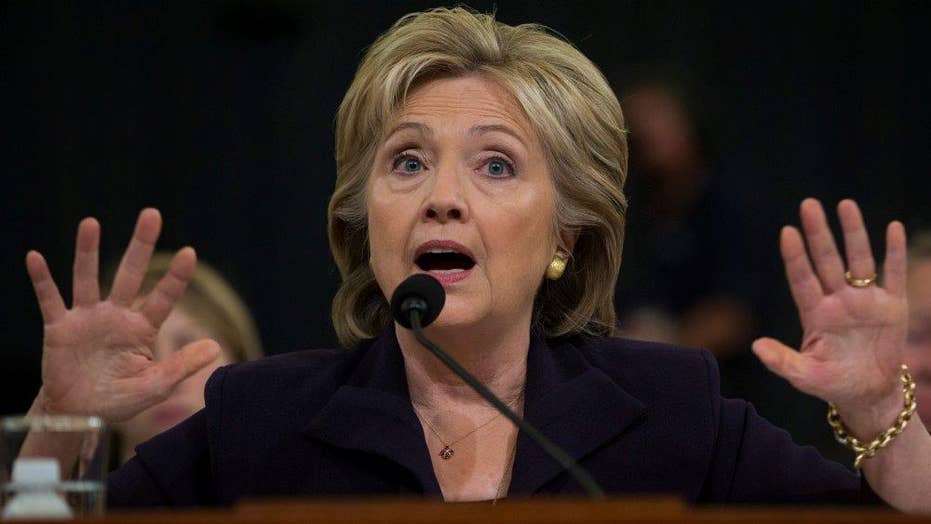 Will Benghazi attacks start to catch up to Hillary Clinton?

The latest batch of emails released from Hillary Clinton's personal account from her tenure as secretary of state includes 66 messages deemed classified at some level, the State Department said early Friday.

In one email, Clinton even seemed to coach a top adviser on how to send secure information outside secure channels.

In all, the State Department released 1,262 messages in the early hours of Friday, making up almost 2,900 pages of emails. Unlike in previous releases, none of the messages were searchable in the department's online reading room by subject, sender or recipient.

Clinton, the front-runner for the Democratic presidential nomination, has repeatedly maintained that she did not send or receive classified material on her personal account. The State Department claims none of the emails now marked classified were labled as such at the time they were sent.

However, one email thread from June 2011 appears to include Clinton telling her top adviser Jake Sullivan to send secure information through insecure means.

In response to Clinton's request for a set of since-redacted talking points, Sullivan writes, "They say they've had issues sending secure fax. They're working on it." Clinton responds "If they can't, turn into nonpaper [with] no identifying heading and send nonsecure."

Ironically, an email thread from four months earlier shows Clinton saying she was "surprised" that a diplomatic oficer named John Godfrey used a personal email account to send a memo on Libya policy after the fall of Muammar Qaddafi.

Another message includes a condolence email from the father of U.S. Army Sgt. Bowe Bergdahl following the 2012 attack on the U.S. Consulate in Benghazi.

The note from Bob Bergdahl, which was forwarded to Clinton by Sullivan, reads in part, "Our Nation is stumbling through a very volatile world. The 'Crusade' paradigm will never be forgotten in this part of the world and we force our Diplomats to carry a lot of baggage around while walking on eggshells."

After seeing the email, Clinton directed her assistant Robert Russo to "pls [sic] prepare [a] response." Bowe Bergdahl was freed from Taliban capitivity in May 2014 as part of a prisoner swap. He faces a court-martial for desertion in August.

The messages had previously been released in batches at the end of each month. A federal judge has ordered that the email release be completed by Jan. 29.

The latest document drop came one day after the State Department was criticized by its independent inspector general for producing "inaccurate and incomplete" responses to public records requests during Clinton's time as secretary of state.

The report underscored inherent problems for public responses to records requests when government employees use a private email account, as Clinton did.

The federal public records law "neither authorizes nor requires agencies to search for federal records in personal email accounts maintained on private servers or through commercial providers" such as Gmail or Yahoo, the report stated. "Furthermore, the [Freedom of Information Act] analyst has no way to independently locate federal records from such accounts unless employees take steps to preserve official emails in department record-keeping systems."