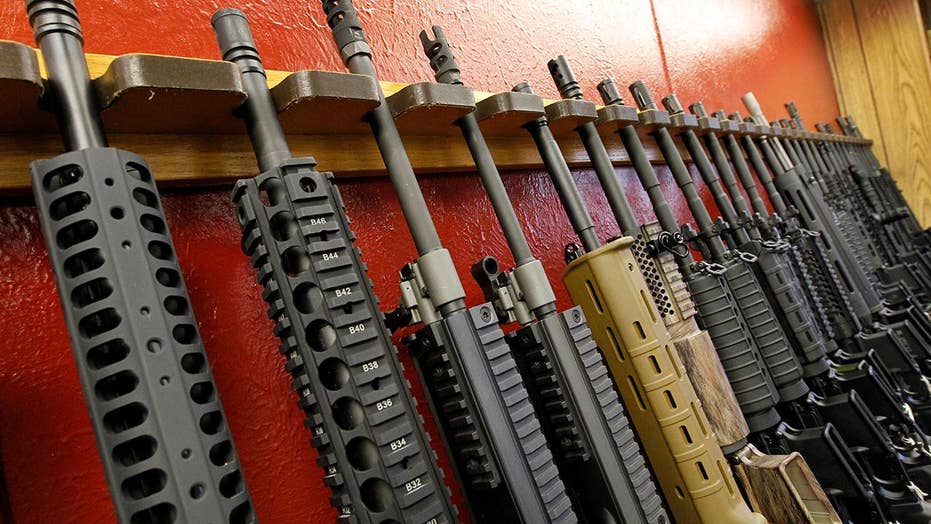 Tucker: The ideological gap between the leaders of America's most powerful corporations and the Democratic Party is minimal. The Left is colluding with big companies to roll back the Second Amendment. On Youtube, Google has banned the posting of videos that link to gun sellers, or that simply promote the purchase of guns and accessories. #Tucker

Statues depicting people terrified by gun violence represent the latest effort by a gun-control group and its allies to win support for their cause, according to reports.

The statues, created with 3-D printers, are to be "strategically placed in 10 notoriously pro-gun rights districts," the San Francisco Chronicle reported, while paired with demonstrations led by student organizers.

The statues were designed with help from Manuel Oliver, an artist who lost his son, Joaquin, 17, in the mass shooting last February at Marjory Stoneman Douglas High School in Parkland, Fla.

One design in the project, callled "The Last Loockdown," shows a terrified girl huddled underneath a desk, the Washington Post reported.

"I know my son -- he was a cool dude -- and I know he would think this statue is a really powerful way to get our message across," Oliver told the paper.

The statues are part of a nationwide voter registration drive to urge voters to elect candidates who back gun-control measures, the report said.

Giffords Courage is teaming up with the student leaders, the paper reported, citing the organization's news release.

"I am proud of [young people] for making it clear to the gun lobby and the NRA that we will no longer tolerate a world where politicians vote against the public safety of the communities they represent," Gabrielle Giffords, co-founder of Giffords Courage, said, according to the Chronicle.

Giffords, a former congresswoman from Arizona, survived an assassination attempt in 2011.

Sean Leonard, a Texas advertising director, and his partner Dan Crumine were the "masterminds" behind the plans and also designed the statues along with Oliver, the Chronicle reported.

“That’s what art does, it stops people, makes them think. It connects with people in a more powerful way than trying to talk them into it."

The statues, made of bronze, have graffitti scratched onto their surface, with gun-control messages and information about registering to vote.

Oliver said the statues have the goal of “showing in one stark image what gun violence has come to in America,” according to the paper.

“That’s what art does, it stops people, makes them think. It connects with people in a more powerful way than trying to talk them into it,” Oliver told the Post.