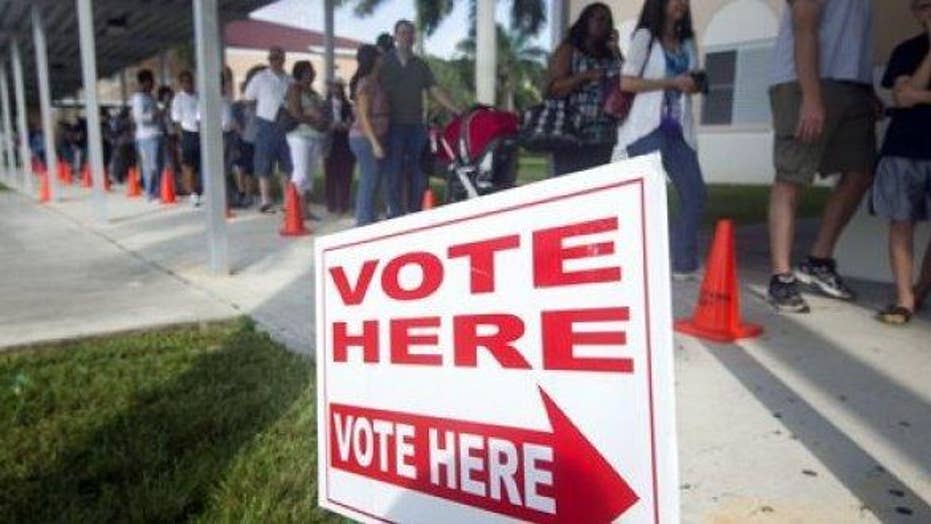 A possible case of voter fraud in Los Angeles has critics questioning whether the man who heads the nation’s largest voting district is fit to ensure fairness, given his track record in another jurisdiction.

Los Angeles County Registrar Dean Logan, whose district includes more than 4.8 million voters, had a controversial stint in the same role in a key Washington district. At least one case of irregularities – more than 80 ballots for Tuesday’s election filled out with names and the same address – has been brought to his attention. But if history repeats itself, Logan may not get to the bottom of the situation.

“Mr. Logan in 2004 presided over one of the great meltdowns of U.S. elections during his previous tenure as elections chief of King County, Washington, which includes Seattle,” said John Fund, a journalist and co-author with Hans von Spakovsky of the book, “Who’s Counting: How Fraudsters and Bureaucrats Put Your Vote at Risk.”

The 2004 governor's race in Washington “entered the ranks of electoral infamy,” Fund said, when Democrat Christine Gregoire beat Republican Dino Rossi by 132 votes out of 2.7 million cast after three recounts.

“The mess in those recounts made the Florida 2000 [presidential] battle look orderly,” Fund said, noting in King County alone, there were more than 3,500 unaccounted-for ballots, with some precincts finding more executed ballots than voters, and others more voters than ballots.

The Seattle Times documented 129 felons illegally voting in that election; National Review reported nearly 350 provisional ballots were counted without being verified; and The Wall Street Journal noted some 55,000 optical-scan ballots were "enhanced" so the voters' supposed “intent” could be determined.

“[The] 2004 [race] was a real mess in Washington when Dean Logan was in charge of the election,” said Bob Williams, then with the Evergreen Freedom Foundation in Olympia. “They kept finding ballots and losing ballots. They let dozens of felons vote illegally. He did a terrible job.”

Logan, who, before accepting the registrar’s position in Los Angeles in 2008, served as the director of records, elections and licensing services for King County, Washington, as state elections director for the Washington secretary of state; and as the elected county clerk and chief deputy county auditor in Kitsap County, Wash. He has more than 25 years’ experience in elections administration.

But when Logan ran the 2012 elections in Los Angeles, the attorney general race between Democrat Kamala Harris, the San Francisco district attorney, and Republican Steve Cooley, the district attorney for Los Angeles County, was contentious. Processing 9 million votes “led to a full-fledged food fight between the candidates,” Fund said, with Harris claiming Cooley officials “crowded election workers and aggressively attempted to have ballots disqualified," while Cooley aides countered election workers in Los Angeles were “sloppy” or negligent in comparing signatures on provisional ballots.

In the current election, an 89-year-old woman in San Pedro, Calif., received 83 unused absentee ballots in the mail on Oct. 29, all addressed to different names supposedly living in her two-bedroom apartment. Additional blank ballots were delivered throughout the following week.

Her neighbor, Jerry Mosna, found two stacks of bundled blank ballots on top of their joint mailbox, and he returned them to the U.S. Postal Service after being turned away by the Los Angeles Police Department. He and his wife, Madalena Mosna, suspect voter fraud.

A spokesperson for Logan told FoxNews.com that an initial assessment showed it is an “isolated situation related to a system error that occurred, causing duplicate ballots to be issued to an address entered for a single voter.”

Logan’s office did not return calls Tuesday requesting comment on the status of any ongoing investigation or about previous controversies involving Logan.

The LA Times reported Monday that Los Angeles resident Todd Karr, who signed up to vote by absentee ballot, encountered a similar issue as the woman in San Pedro. His absentee ballot had his home address, but another voter’s name and voter identification number.

“After 15 calls to four different agencies — the registrar, the secretary of state, the Los Angeles County Democratic Party and an election-protection group — Karr was told the ballot could not be corrected,” the LA Times reported, noting his only option was to drive to Norwalk, stand in line and vote in person.

Von Spakovsky, a former FEC commissioner and counsel to the assistant attorney general for civil rights at the U.S. Justice Department, said California is of particular concern because of the rising number of noncitizens illegally registering and voting in elections, as well as the “terrible shape” the voter registration rolls are in.

Charles Bell, an attorney in California who studies voter fraud issues, said he believes election officials in California conduct fair elections at the polls on Election Day, but he has concerns about fraud because of “deadwood voters” on registration rolls.

“All of these conditions create opportunities for those who want to commit fraud to do so,” Bell said. “While it might not impact the presidential election, it may change the outcome of a close election at the local level.”