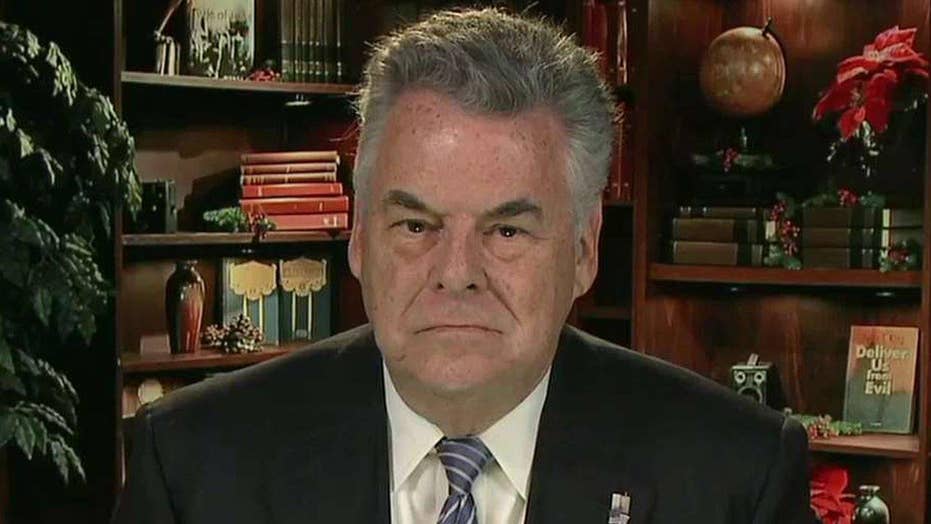 Rep. King on the need for increased security, surveillance

New York GOP Rep. Peter King on Sunday called again for better surveillance of mosques in the U.S., suggesting Islamic terrorists visit them and said that critics can “cry all they want” about the tactic amounting to a civil liberties violation.

King, a member of the House’s Homeland Security and Select Intelligence committees, told “Fox News Sunday” that “99 percent” of Muslims in the United States are good people and that he’s friends with people of the Islamic faith.

“But the fact is, (mosques are) where the threat is coming from,” King said.

He also argued that some Americans have a “blind political correctness” on such issues and that civil libertarians and other critics of better mosque surveillance can “cry all they want.”

King pointed out that one of the so-called Boston Marathon bombers, Tamerlan Tsarnaev, was told to leave a local mosque following two outbursts, yet members declined to warn authorities.

“If they had known that in advance, you combine that with the fact that the Russians had already told us to be on the lookout for him, we could have possibly prevented the … bombing,” King said.

Tsarnaev and younger brother Dzhokhar Tsarnaev killed three race spectators and injured as many as 264 others in the April 2013 attack.

Mosque members reportedly said Tsarnaev did nothing to suggest he would plot, then lead such an attack.

He also said the Islamic State terror group’s intentions to attack on U.S. soil “has become clear” to intelligence officials over “the last several months.”

King, a 12-term congressman and former chairman of the lower chamber’s Homeland Security committee, also suggested that he agrees with Islamic State leader Abu Bakr al Baghdadi saying in a purported video this weekend that the roughly 16 months of U.S.-led airstrikes in Syria have done little damage to the terror group.

“I would expect al-Baghdadi to say that,” King said. "We've had some impact, but unfortunately overall he is probably right. … ISIS is stronger.”

King said the group now has more territory under its control and is making “great inroads” in Afghanistan.

He also said the Transportation Security Administration’s plan to now conduct full-body scans on some airline passengers is in part a response to the San Bernardino attack and the Paris bombing attacks weeks earlier in which 160 people died and for which the Islamic State has claimed responsibility.