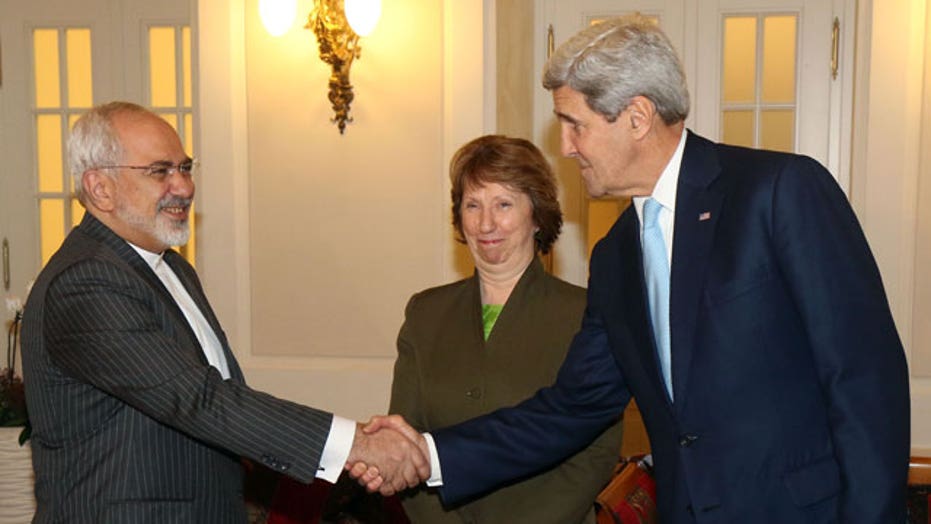 Will US hold ground in Iran nuclear talks?

U.S. Secretary of State John Kerry canceled plans Friday to pull back from talks with Iran about the country's nuclear program -- a shift that suggested some hope of movement on the protracted negotiations.

The official Iranian news agency IRNA said Kerry had made new proposals to the Iranians to bridge the differences blocking a deal.

U.S. officials had said earlier Friday that Kerry was planning to leave for Paris later in the day and that his plans to return to the talks were uncertain.

His decision to stay suggests some forward movement in bridging differences less than four days before Monday's deadline for a deal.

Officials from the U.S., Russia, China, Britain, France and Germany are seeking to reduce the potency of Iran's nuclear program and slow its technical ability to produce atomic weapons. Iran denies seeking such arms, but is negotiating in pursuit of relief from international sanctions.

Zarif apparently also delayed -- or cancelled --  plans to leave for consultations in Tehran. Reports that he was departing Friday were replaced with the official IRNA news agency quoting an unidentified Iranian nuclear negotiator as saying Zarif was staying "and the talks will continue."

The Iranian negotiator was quoted as saying that ideas proposed by the Americans were not yet ripe enough to warrant Zarif's flying back to Tehran.

Expectations have been growing that the Monday deadline for a full deal will be missed because of differences on how much Iran needs to reduce the size and scope of its key nuclear programs.

Both the Iranians and the six world powers must soon decide whether to go beyond Monday or adjourn to a later date. They may also opt to end negotiations, but that is unlikely.