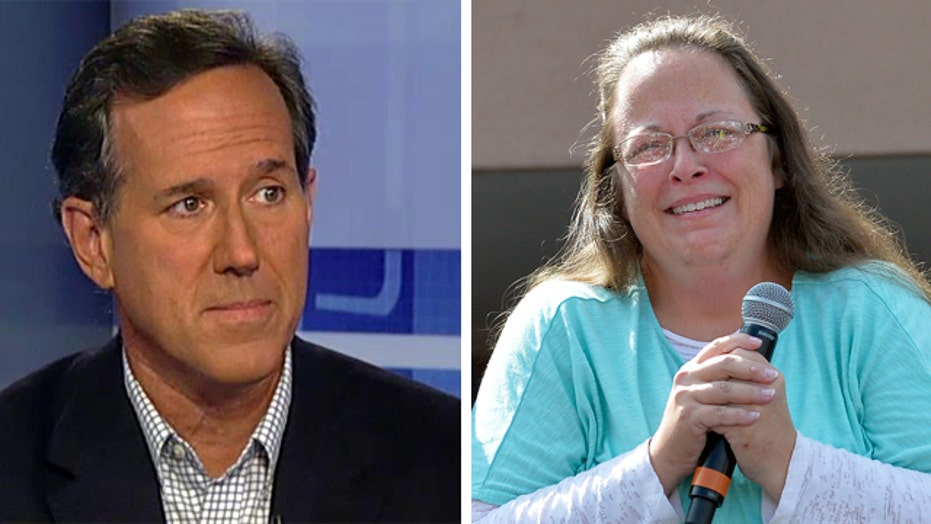 Some GOP presidential candidates, like Mike Huckabee and Ted Cruz have been front and center in their support of clerk imprisoned for refusing marriage licence to gay couples, while others have avoided the case

The battle over Kentucky clerk Kim Davis' refusal to issue gay marriage licenses is beginning to raise the issue in statehouses as to whether lawmakers should enshrine religious accommodations for public officials -- with some warning that failure to do so will only lead to further standoffs.

Some point to states like North Carolina, which earlier this year passed a law allowing court officials to refuse to perform gay marriage responsibilities because of their religious beliefs -- while letting other officials step in for them, so eligible couples can still get their licenses.

At least one bill has been pre-filed for the 2016 session in Kentucky that would protect county clerks who refuse to issue marriage licenses on religious grounds.

But that session begins in January, and Kentucky Gov. Steve Beshear has said he sees "no need" to spend extra state resources on a special session before then when most county clerks "are doing their jobs."

Davis and her attorney nevertheless renewed their call Tuesday for state action, as she was released from a local jail after five days.

Attorney Mat Staver said his client wants an "accommodation" allowing for her name to be removed from marriage certificates for gay couples.

"Kim still is asking for that today," he said, adding that the courts, the legislature and the governor could act on this.

Unclear is whether Davis, barring such a change in the law, will violate the federal judge's order that freed her on Tuesday.

In that order, U.S. District Judge David Bunning, the same judge who initially jailed the Rowan County clerk last week on a contempt of court charge, said the court is "satisfied" that the clerk's office has since issued marriage licenses "to all legally eligible couples" -- those licenses have been handled by Davis' deputy clerks.

At the same time, Bunning directed Davis not to "interfere in any way" with the marriage licenses now being issued by her office.

Her legal counsel did not say whether Davis had any intention to defy the courts.

Rather, Staver said: "She loves God, she loves people, she loves her work -- and she will not betray any of those three." He said Davis will not violate her "conscience," and said the court order "did not resolve the underlying issue."

Some Republican presidential candidates agreed that lawmakers, at the state and federal level, should step in to craft an accommodation for clerks like Davis.

Former Pennsylvania Sen. Rick Santorum told Fox News that "there should be some accommodation made for people of faith. I mean, this is a very serious religious matter."

He specifically called for passage of a bill called the First Amendment Defense Act, or a similar executive order. That proposal would specifically bar the federal government from taking "discriminatory action" against someone acting on their religious objections to gay marriage. Santorum said states, in addition to the federal government, should pass similar legislation.

"This isn't going to be the only time we run into this situation," Santorum said.

Retired neurosurgeon Ben Carson also told Fox News that "Congress now has a responsibility to step up to the plate and enact legislation that will protect the First Amendment rights of all Americans."

Few states have actually passed such accommodation laws, as gay marriage has only been the law of the land since June.

Among the first to act was North Carolina, where the legislature overrode Republican Gov. Pat McCrory's veto over the summer on the bill. The law says court officials who disclose a "sincerely held religious objection" must stop performing marriage duties for both gay and heterosexual couples for at least six months. The chief District Court judge or the county register of deeds -- both elected officials -- would fill in on marriages if needed.

Before North Carolina, only Utah had passed such a similar exemption, earlier this year.

Ryan T. Anderson, a senior research fellow with the Heritage Foundation, has pointed to the North Carolina law as an example that other states could follow.

He wrote in The New York Times that it both accommodates religious beliefs of court officials while making clear that eligible couples cannot be denied a license. "Perhaps a similar solution could be found in Kentucky, by removing an individual clerk's name and title from a marriage license," he wrote.

In a Sept. 3 statement, Gov. Beshear, a Democrat, urged all sides to wait until the next session.

"The General Assembly will convene in just four months and can make any statutory changes it deems necessary at that time," he said.

The governor also told reporters Tuesday that he's "glad" for Bunning's latest order and if the legislature wants to "change the process" for marriage licenses, "they're certainly free to do so" in January.