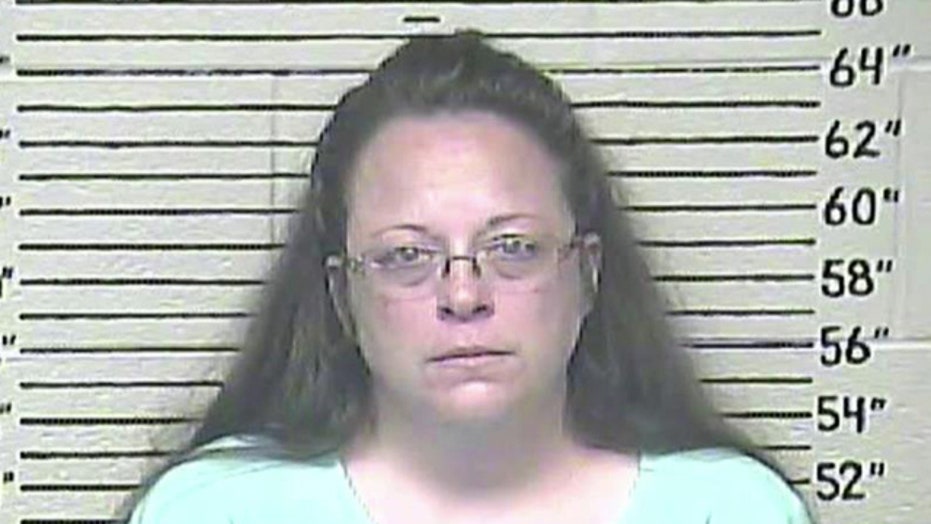 LEXINGTON, Ky. – Attorneys for the Kentucky clerk who was jailed last week because of her refusal to issue marriage licenses to gay couples said Monday they have filed an emergency motion with a federal court that they hope will result in Kim Davis' freedom.

The filing seeks to have Kentucky Gov. Steve Beshear accommodate Davis' "religious conviction," and not compel her to grant licenses to gay couples, Liberty Counsel said in a statement.

"The motion requests an injunction pending appeal for an exemption from the Governor's mandate that all county clerks issue marriage licenses," said the statement by Liberty Counsel, which is representing Davis.

Charla Bansley, communications director for Liberty Counsel, said Davis could be released from jail immediately if the motion were granted by the U.S. Court of Appeals for the Sixth Circuit ordering Beshear to issue Davis an "accommodation" — allowing her to remove her name and title from official marriage certificates issued in Rowan County.

By doing that, Davis would not be sanctioning any same-sex unions and her conscience would be satisfied, they say.

"If there was an accommodation, she would be released (from jail) because she would no longer be in contempt," Bansley said.

On Monday, about 30 protesters lined the sidewalk outside Bunning's home in Fort Thomas, Kentucky, carrying signs that read "Free Kim Davis." Fort Thomas Police Lt. Casey Kilgore said the group gathered around 2 p.m., and the protest stretched on several hours. He said the group sang and waved their signs; they broke no laws and no one was arrested. He did not know if Bunning was home.

In a statement on Monday, the U.S. Marshals declined to say if any precautions have been taken with security for the federal judge.

Davis, an apostolic Christian, says gay marriage is a sin. She also says it would be a sin for her to issue a marriage license to a same-sex couple because the licenses are issued under her authority. She tried in vain to have state lawmakers change the law as a legal challenge to Kentucky's same-sex marriage ban wound its way through the federal appeals court.

But Davis still refused to do it, saying she could not betray her conscience or her God.

Thursday, Bunning ruled Davis was in contempt of court for disobeying his order and sent her to jail. Her deputy clerks then issued marriage licenses to gay couples Friday with Davis behind bars.

Bunning indicated Davis will be in jail at least a week. She could stay longer if she continues to not obey the judge's order. Bunning had offered to release Davis from jail if she promised not to interfere with her deputy clerks as they issued the licenses. But Davis refused.

The state legislature is not scheduled to meet again until January and Beshear has refused to call a special session. Davis has refused to resign her $80,000-a-year job. As an elected official the only way she could lose her job is to lose an election or have the state legislature impeach her, which is unlikely given the conservative nature of the state General Assembly.

Davis' plight has reignited the gay marriage debate and the limits of religious freedom. Her imprisonment has inspired spirited protests from both sides in this small eastern Kentucky community known mostly as the home to Morehead State University.

On Saturday, about 300 people rallied in support of Davis at the Carter County Detention Center where she is being held. Another rally is scheduled for Tuesday with Republican presidential candidate Mike Huckabee.