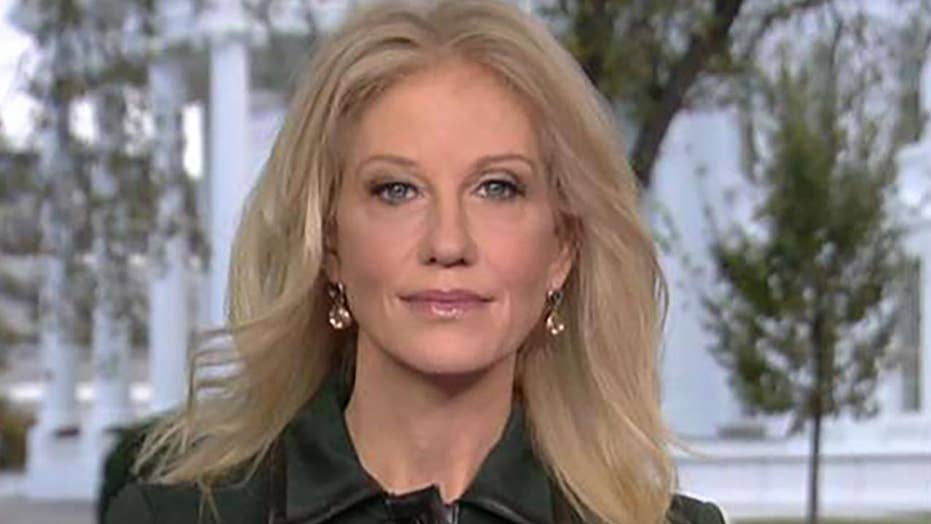 Counselor to President Trump Kellyanne Conway reacts to the mass shooting at a California bar and defends the decision to revoke CNN chief White House correspondent Jim Acosta's press pass after a contentious press conference with the president.

White House Counselor Kellyanne Conway voiced concerns Thursday about “red-hot rhetoric” in the country while arguing the blame should not be put on President Trump's shoulders, on the heels of another contentious day in Washington.

After discussing the tragic mass shooting at a California bar, Conway was asked about Wednesday’s combative press conference in which President Trump sparred with CNN’s Jim Acosta. The CNN correspondent had his press pass revoked after he refused to hand over the microphone to a White House intern.

Conway said that nobody should have a reporter “swiping away at them” and called the incident “unfortunate.”

Hemmer then pointed to the White House Correspondents' Association – of which Fox News is a member – condemning the decision to revoke Acosta’s press pass. In a statement, the WHCA called the move "unacceptable," and urged the White House to "immediately reverse this weak and misguided action" against the CNN reporter.

“Look, there are journalists here at the White House and the White House press corps who, every single day, try to do their job by getting the story. Others try to get the president, they shall remain nameless right now. And I think that some people like to grandstand and be part of the story,” Conway said. “There is no question about that. We hear that from other journalists.”

“Let’s talk about red-hot rhetoric. I’ll stand here all day long in my four-inch heels and talk about it… but I will not let it be cast as one-sided and the president’s fault.”

Conway said she would not expect the WHCA to say anything differently, as its role is to defend members of the media.

Hemmer noted “there is a national tone that is running red hot” and asked how she counsels the president to bring that tone down.

“The president said days ago that he would like to have a softer tone. But he’s had no choice because he has to defend himself,” she said, before mentioning prominent Democrats who have called for confrontations with the right.

“Tucker Carlson, your colleague, had a mob show up at his house last night. His wife was hiding in a pantry. Let’s talk about red-hot rhetoric. I’ll stand here all day long in my four-inch heels and talk about it,” she said. “But I will not let it be cast as one-sided and the president’s fault.”

Conway was referring to recent events such as Hillary Clinton recently declaring “you cannot be civil with a political party that wants to destroy what you stand for” and Rep. Maxine Waters, D-Calif., famously telling people to harass Trump supporters in public places.