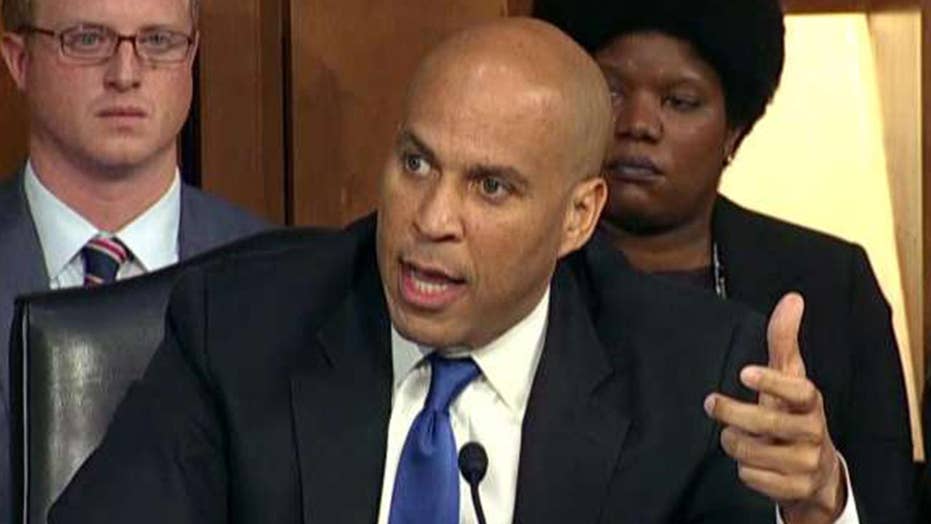 Democrat senators call on Judiciary Committee Chair Sen. Grassley to delay the Supreme Court nomination hearing to give them more time to review documents on the nominee's service.

Dozens of people were arrested during the first day of Brett Kavanaugh’s Supreme Court hearing as they interrupted the proceedings with shouts of protest against the judge.

Among those arrested was UltraViolet executive director Shaunna Thomas, the women's organization told Fox News. Thomas, who co-founded the group focused on reproductive rights and combating sexism, said, “Senators, on behalf of the millions of women across the country whose rights will be stripped by a Kavanaugh court, I demand you reject this nomination,” according to an UltraViolet spokesperson.

“I was just arrested for civil disobedience in the Kavanaugh hearings,” Perabo, known for “Covert Affairs” and “Coyote Ugly” said on social media. “Many citizens before me have fought for the equal rights of women. I can’t be silent when someone is nominated to the Supreme Court who would take our equal rights away.”

Interjections – from those in the audience and Democratic senators – peppered the hearing from its very start, even before Senate Judiciary Chairman Chuck Grassley, a Republican, could make it through his opening statements. One by one, protesters stood and disrupted the hearing before being removed by police.

“This is a mockery and a travesty of justice,” one woman shouted. “Cancel Brett Kavanaugh.”

Democrats also vociferously called for a delay in the hearing, citing some 42,000 documents regarding Kavanaugh’s work with past administrations that was made available to the committee last minute.

Kavanaugh’s opinions on presidential authority were called into question by Senate Democrats before the hearing began. Kavanaugh worked with Kenneth Starr in the 1990s, co-writing the independent counsel’s report laying out the legal framework supporting then-President Bill Clinton’s impeachment. He said Clinton should be impeached because he misled the public and lied to his staff.

Writing for the Minnesota Law Review, Kavanaugh said, “I think we grossly underestimate how difficult the job [of U.S. president] is.” Because of that, he said he believed “[it's] vital that the President be able to focus on his never-ending tasks with as few distractions as possible.”

Questioning of Kavanaugh is to begin Wednesday, and votes in the committee and on the Senate floor could occur later in September.

Republicans command a narrow 50-49 Senate majority, which would return to 51-49 once a Republican successor to the late Sen. John McCain is appointed. Republicans have little margin for error, though Vice President Pence can break a tie.

If all goes to Republicans’ plans, Kavanaugh could be sitting on the bench when the Supreme Court begins its new term on Oct. 1.