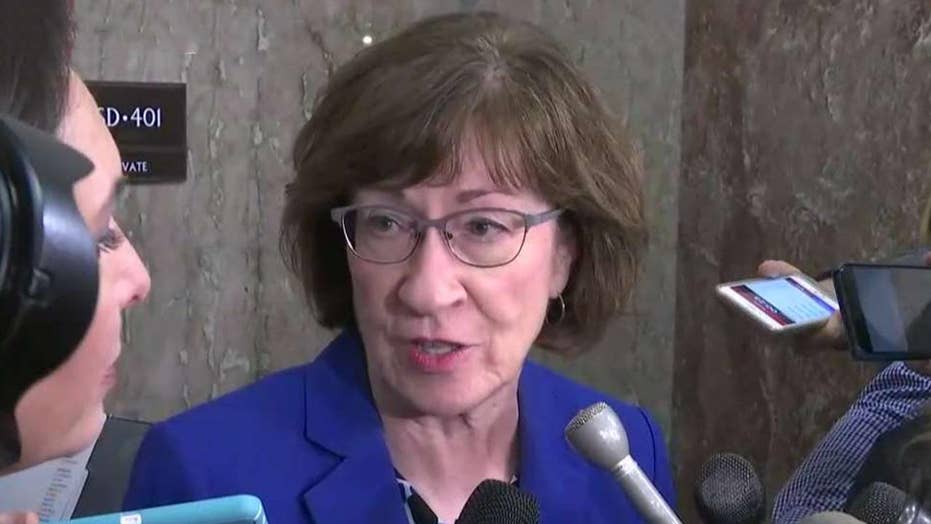 Sen. Susan Collins: I want everyone to testify under oath

Sen. Susan Collins, R-Maine, reiterated her calls that both Supreme Court nominee Brett Kavanaugh and the woman accusing him of sexual assault should testify under oath before the Senate Judiciary Committee.

Collins, a key swing vote, told reporters gathered outside her office on Monday afternoon that a "through interview" of both Kavanaugh and his accuser, research psychologist Christine Blasey Ford, need to be conducted before the confirmation process continues.

"I want both individuals to come before the Senate Judiciary Committee and testify under oath," Collins said. "It's important that this is a through interview."

Collins’ comments comes after The Washington Post published a story on Sunday revealing Ford’s name and more details of the alleged sexual assault that occurred when she and Kavanaugh were in high school.

The Maine lawmaker added that she could not answer questions regarding the veracity of Ford's accusations, but noted that if they prove true, Kavanaugh would be disqualified for the Supreme Court nomination.

"I don’t know enough about Dr. Ford and her allegations to reach judgment of the allegations," Collins said. "Obviously if Kavanaugh has lied about what happened that would disqualify him."

Collins spoke with Kavanaugh last Friday shortly after the then-anonymous allegations surfaced and said the federal judge denied ever assaulting any woman.

"When I had my phone call with him last week he emphatically said he never had an encounter like this," she added.

Democrats and some Republican senators have expressed concern over Ford's accusation that a drunken Kavanaugh groped her and tried to take off her clothes at a party when both were teenagers in suburban Maryland.

Kavanaugh released a new statement Monday calling the allegation "completely false" and saying he "had no idea who was making this accusation until she identified herself" to The Washington Post.

"I am willing to talk to the Senate Judiciary Committee in any way the committee deems appropriate to refute this false allegation, from 36 years ago, and defend my integrity," Kavanaugh said.

Debra Katz, the attorney for the accuser, said Ford was willing to tell her story publicly to the judiciary panel but no lawmakers had yet contacted her. Katz denied that Ford, a Democrat, was politically motivated.

"She believes that if it were not for the severe intoxication of Brett Kavanaugh, she would have been raped," Katz told NBC's "Today." Explaining Ford's initial reluctance to come forward, Katz said, "No one in their right mind regardless of their motives would want to inject themselves into this process and face the kind of violation that she will be subjected to by those who want this nominee to go through."

The judiciary panel's chairman, Sen. Chuck Grassely of Iowa, has said he wants Kavanaugh and Ford to be interviewed over the phone by bipartisan staff. But Democrats say staff calls are insufficient and want the proceedings postponed so the FBI can investigate.

The Democrats have written to Grassley, saying delaying Thursday's scheduled committee vote would give the FBI time to investigate.

Theit letter said there have been serious questions about Kavanaugh's "record, truthfulness and character."