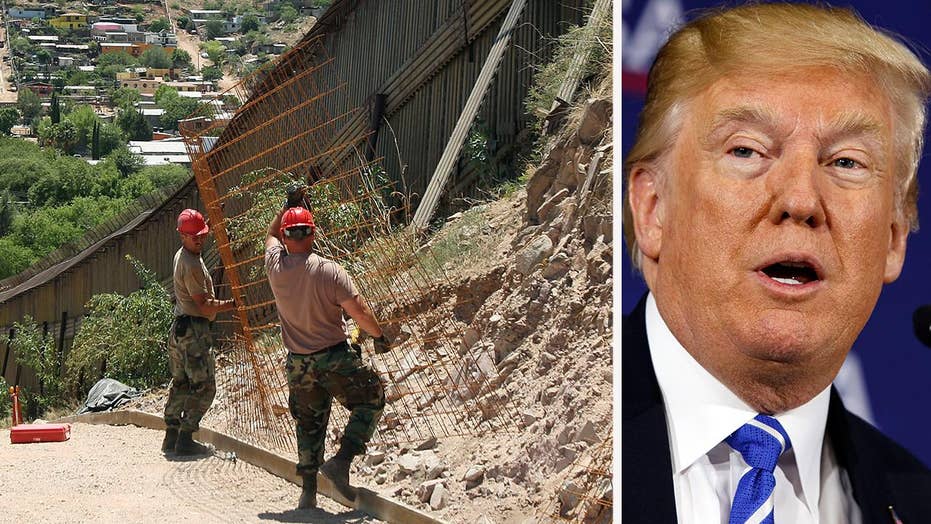 In West Virginia to promote his tax cuts, President Trump explained why he is calling out the National Guard to secure the Mexican border; chief White House correspondent John Roberts reports.

The Justice Department announced Friday that it is implementing a “zero-tolerance” policy for prosecuting those attempting to enter the U.S. illegally -- the latest in a series of measures by the Trump administration to combat illegal immigration.

“The situation at our Southwest Border is unacceptable,” Attorney General Jeff Sessions said in a statement announcing the policy. “Congress has failed to pass effective legislation that serves the national interest -- that closes dangerous loopholes and fully funds a wall along our southern border. "

“As a result, a crisis has erupted at our Southwest Border that necessitates an escalated effort to prosecute those who choose to illegally cross our border,” he said.

The Trump administration says the number of attempted border crossings was up 203 percent in March compared to March 2017. In response, Trump this week signed a proclamation sending the National Guard to the border. He has said he would like to see 2,000-4,000 members sent to the border.

The latest move by the Justice Department orders U.S. attorneys along the border to adopt a policy of prosecuting all referrals from DHS of illegal entry and attempted illegal entry into the U.S. It comes almost a year after Sessions issued a memo to federal prosecutors directing them to prioritize certain immigration offenses.

The DOJ’s announcement comes amid increasing criticism by Trump of U.S. laws for the border -- specifically on so-called “catch-and-release.”

“Our Border Laws are very weak while those of Mexico & Canada are very strong,” he tweeted Wednesday. “Congress must change these Obama era, and other, laws NOW!”

“We don't have laws, we have catch-and-release,” he said Tuesday. “You catch and then you immediately release and people come back years later for a court case, except they virtually never come back.”

In particular, Trump was riled by media reports of a caravan of more than 1,000 Central American migrants heading through Mexico toward the U.S. border. Trump threatened to end the North American Free Trade Agreement (NAFTA) and cut aid to Honduras if the caravan was not stopped. He has also increased his calls for Congress to fund the wall on the southern border.

Other administration officials have echoed Trump’s stance, urging Congress to pass laws securing the border and promising more action from the administration. The Pentagon said Thursday it is establishing a new “border security support cell” that will be manned 24 hours a day and will support U.S. Customs and Border Protection.

Alfonso Aguilar, president of the Latino Partnership for Conservative Principles and the former chief of the U.S. Office of Citizenship for President George W. Bush, says he supports President Trump's plan to deploy the National Guard to the Mexican border to help restore operational control.

"We will not allow illegal immigration levels to become the norm," DHS Secretary Kirstjen Nielsen said this week. "More than 1,000 people a day, 300,000 a year violating our sovereignty as a nation will never be acceptable to this president."

On Friday, Sessions -- who has a long-standing reputation for his tough stance on illegal immigration -- warned that illegal entry into the U.S. will not be rewarded and will be instead “met with the full prosecutorial powers of the Department of Justice.”

“To the Department’s prosecutors, I urge you: promoting and enforcing the rule of law is vital to protecting a nation, its borders, and its citizens,” he said.