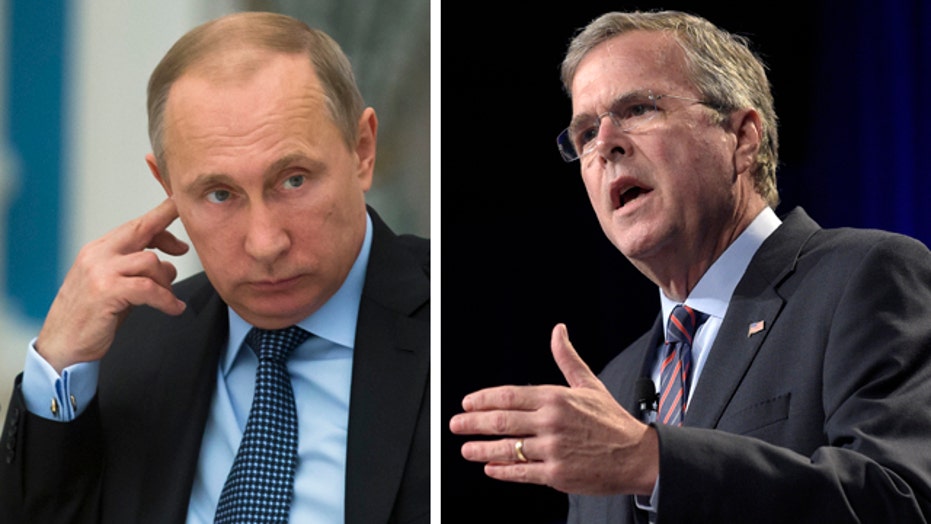 Former Florida Gov. Jeb Bush will call for the U.S. to deepen economic ties with Europe in his first major foreign policy speech as a presumptive presidential candidate Tuesday in Berlin.

Bush, who has said he will formally announce a decision about his political future June 15, will also call for a tougher policy toward Russia and its President Vladimir Putin.

The speech to the economic conference of German Chancellor Angela Merkel's Christian Democratic Union party comes one day after President Obama wrapped up a two-day trip to Germany for the G-7 meeting at a Bavarian resort. During the meeting, Obama and Merkel displayed their personal affection -- she called him "dear Barack" -- and pledged to continue the two nations' close ties and joint diplomatic projects.

Germany is the U.S.'s strongest European trading partner, and the two countries work closely on a host of diplomatic issues, including the ongoing civil war in Ukraine and negotiations over Iran's nuclear program. But Bush advisers told the Associated Press he believes Obama has ceded to Germany too much of the diplomatic burden in Europe for winning approval for sanctions against Russia for its backing of pro-Russian separatists in Ukraine -- a difficult task, given Russia's deep economic relationships on the continent.

"Seventy years after America and Western Europe began to build the post-[World War II] architecture of security, that alliance is as relevant as the day it was founded," the former governor says in remarks prepared for delivery Tuesday. "Ukraine, a sovereign European nation, must be permitted to choose its own path. Russia must respect the sovereignty of all of its neighbors. ... Our alliance, our solidarity and our actions are essential if we want to preserve the fundamental principles of our international order."

The message, said Kenneth Juster, a foreign policy aide to Bush and partner at the global investment firm Warburg Pincus, is "that when we deal with our allies, we do so in a collaborative manner, especially in addressing challenges from our adversaries."
Bush also plans to meet privately with business and government leaders in Germany as well as in Poland and Estonia over the course of the week to discuss the security threats to the region and to each individually.

One such state, Estonia, has a booming information technology industry -- engineers in Estonia invented Skype -- that survived a cyberattack from Russia in 2007 that knocked out many of the small Baltic country's online government services.

"Both the United States and the European Union are confronted by legitimate security concerns and middle-class concerns, including lack of wage growth," said Kristen Silverberg, a Bush adviser and former ambassador to the European Union during President George W. Bush's second term.

Although Jeb Bush has traveled extensively overseas while and since serving two terms as Florida governor, the trip is aimed primarily at strengthening his credentials overseas, an area of experience often seen as lacking in state governors who run for president.

Fox News' Carl Cameron and the Associated Press contributed to this report.