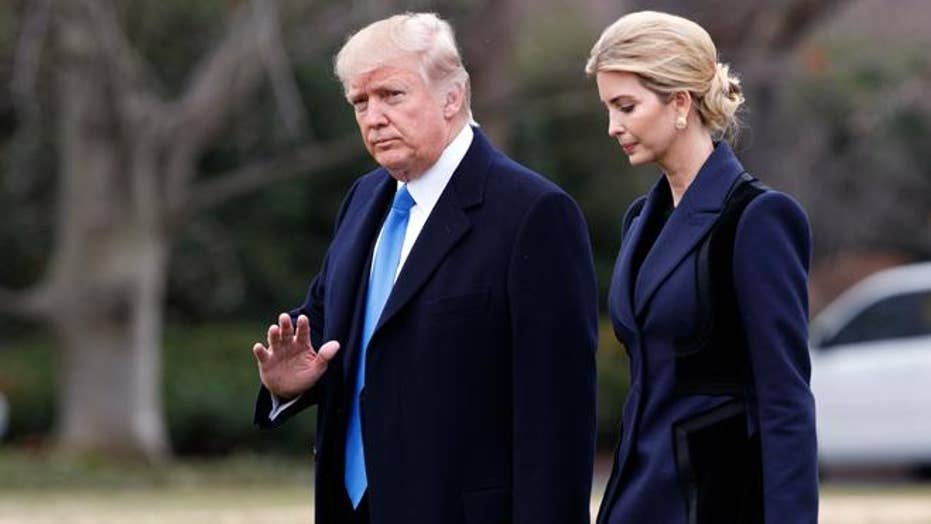 Strategy Room: Ellen Ratner and Frank McCarthy on how the first daughter is working with the president

Ethics experts say the decision to give Ivanka Trump a West Wing office raises yet another conflict-of-interest issue for the family.

The White House told Fox News on Tuesday that while Ivanka will be given an office in the West Wing, she will have neither an official title nor government salary. But despite these conditions, ethics attorneys in both the Bush and Obama administrations say Ivanka is a government employee.

“Even though the White House denies it, Ivanka is for these and other reasons a ‘special government employee’,” Ambassador Norm Eisen, former White House Ethics Counsel under President Obama, said. “So we are headed for yet another Trump ethics dispute in a White House and administration that is already chock full of them.”

“It is very important for the White House to acknowledge she is an employee and not play games,” Painter told Fox News. “They have given her an office. I’m assuming they will give her the devices — which she needs, because the last thing we need is to be playing ‘Hillary games’ on a private server. She’s going to get security clearance -- she is a government employee.”

Painter said that in the Bush White House, he was responsible for giving ethics briefings to those who were not given an official title or salary, and that the administration acknowledged such people were, in fact, working for the government.

“You don’t need to be full time or have a salary to be considered a government employee,” Painter said.

Eisen said that, despite these conditions confirmed by the White House, Ivanka Trump is subject by law to ethics rules, and not voluntarily subject to them as she and the administration have claimed.

“Why not head it off by going all the way now, and fully submitting to ethics rules rather than the half-measures that have been laid out, however positive their direction?” Eisen said.

At issue, yet again for the Trump family, is an anti-nepotism measure enacted in 1967 after Pres. John F. Kennedy famously appointed his brother, Robert Kennedy, as U.S. attorney general. The statute states a “public official,” including the president, “may not appoint, employ, promote, advance or advocate for appointment, employment, promotion, or advancement in or to a civilian position in the agency in which he is serving over or which he exercises jurisdiction.”

The Trump team has said since the election that they feel that the law is for government “agencies,” not the White House. The administration has since employed Ivanka’s husband, Jared Kushner, to be a senior adviser to Trump.

Trump is not the first to contend with anti-nepotism laws—a recent example, was in 1993 when President Bill Clinton appointed then-first lady Hillary Clinton as chairwoman of the president’s Task Force on National Health Care Reform. A court doubted that Congress intended to include the White House and the Executive Office of the President as agencies under federal anti-nepotism law, and upheld Mrs. Clinton’s appointment to the unpaid position.

“Ivanka has a lot of wiggle room to play around in policy. She may have more of a Hillary Clinton first lady role than that of Laura Bush,” Painter said. “But the bottom line is that if Ivanka does work outside of the social realm and moves into policy, she becomes an employee.”

Painter stressed that so long as Ivanka stays away from policies involving trade with the countries she imports clothes in and out of, he didn’t expect an ethical dilemma.