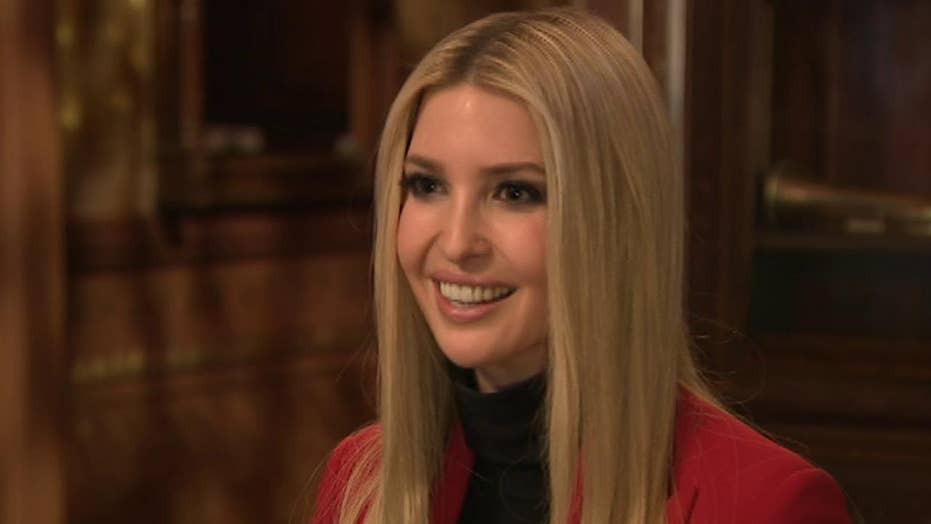 Ivanka Trump: There are many different pathways to the American Dream

Ivanka Trump tells Steve Hilton it's time to destigmatize those who choose not to attend four-year colleges and pick alternative pathways to success.

Ivanka Trump has announced the first batch of grants for her economic empowerment effort, the Women’s Global Development and Prosperity Initiative.

The White House initiative, launched in February with an initial investment of $50 million from the U.S. Agency for International Development, is designed to help women in developing countries get ahead economically.

Its first batch of grants totals $27 million, for 14 projects in 22 countries, mostly in Africa, Latin America and Southeast Asia.

A White House initiative spearheaded by Ivanka Trump to help women in developing countries get ahead economically is announcing its first batch of grants. (RYAN MCBRIDE/AFP/Getty Images)

Trump is daughter of President Trump and a senior White House adviser. The initiative aims to help empower 50 million women in developing countries by 2025.

The budget Trump has proposed for 2020 asks Congress for another $100 million for the initiative, even as he has proposed cuts to other foreign aid.

“We are just getting started, but we are committed to delivering real results that create transformational change for women in developing countries by helping them prosper in the workforce, succeed as entrepreneurs, and fight for legislative change,” Ivanka Trump said Wednesday, according to The Associated Press.

The first 14 projects receiving a share of the $27 million were chosen from some 120 entries, administration officials said Wednesday.

They include an effort in Rwanda to help 1,400 women get into the African country’s fast-growing energy sector; a Latin American initiative that aims to equip 8,700 women with the skills needed to work tech jobs in Brazil, Chile, Colombia, Mexico and Peru; and a plan to support 5,000 women working in Indonesia’s poultry industry.