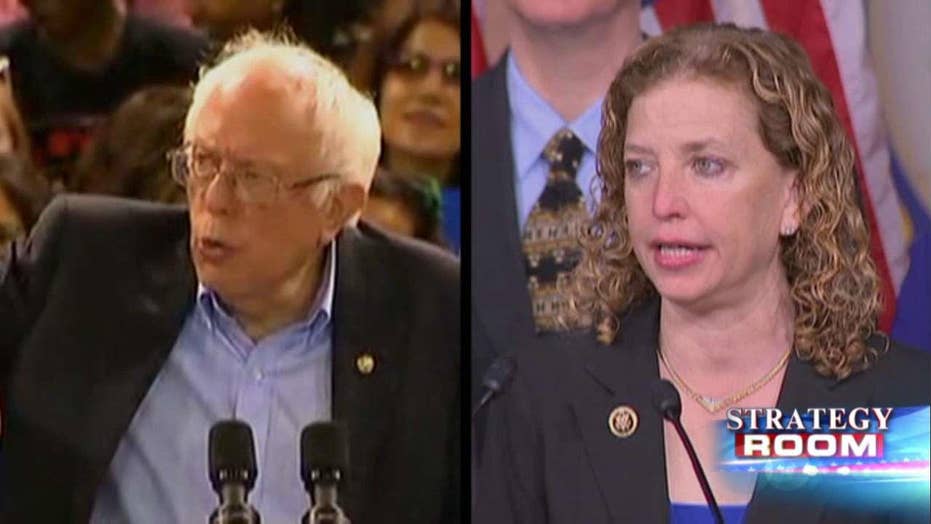 As one of the most powerful Democrats in Washington, Florida Rep. Debbie Wasserman Schultz was expected to have an easy 2016 re-election race – then along came Bernie Sanders.

In a matter of days, the firebrand presidential candidate has elevated the Democratic National Committee chairwoman’s Florida race from just another local primary to a nationalized battle -- and an offshoot of Sanders’ fight against the Democratic Party itself.

Sanders, who long accused Wasserman Schultz of working against his campaign, escalated that feud over the weekend by endorsing her primary challenger, Tim Canova, and then helping him fundraise.

Analysts still see Canova as a longshot bid to topple Wasserman Schultz and deny her a seventh House term. But Sanders’ intervention has given the challenger a much bigger profile, and already is helping him raise hundreds of thousands of dollars.

“Like Bernie, we are running a campaign that is funded by working Americans, not corporations or wealthy elites,” Canova said. “Our political and economic systems are rigged in favor of the billionaire class and establishment politicians like Wasserman Schultz.”

Speaking Monday afternoon with Fox News’ Neil Cavuto, Canova said, “She’s concerned about her re-election and she should be.”

In announcing his endorsement over the weekend, Sanders initially told CNN he’s backing Canova because “his views are much closer to mine than to Wasserman Schultz's." But he pulled no punches when it came to the incumbent, making clear that if elected he’d fire her as DNC chairwoman. In his Canova fundraising email, he said: "The political revolution is not just about electing a president, sisters and brothers.”

The comments complicate what otherwise should have been an easy re-election for Wasserman Schultz, a stalwart fundraiser and 11-year House incumbent.

“As Sanders boosts far-left candidates who share his socialist vision of higher taxes and bigger government, he is forcing Democrats to move even further to the left … rendering their candidates unelectable,” said National Republican Congressional Committee spokesman Bob Salera.

However, Republicans may stand less of a chance at taking the 23rd District seat – held by Democrats since it was created in 1990 – than Canova. No Republican candidate has officially entered the race, though a Washington GOP source told FoxNews.com that several potential candidates are considering a run. Whether Wasserman Schultz survives her Aug. 30 primary is a factor.

The nonpartisan Cook Political Report and other analysts handicapping the race have long had her safely in the win column, and haven’t changed their assessment yet.

Dave Wasserman, who analyzes House races for the Cook report, said Monday that Wasserman Schultz is “not very” vulnerable, despite the Sanders’ attack – which can be traced back to accusations that she limited the number of primary debates to protect the front-running Hillary Clinton.

“There will certainly be a groundswell of contributions and national interest, but his race really depends on voters in her district,” said Dave Wasserman, pointing out that the congresswoman won re-election in 2014 with over 60 percent of the vote.

“Those voters are not succumbing to the Bernie Sanders movement,” he said. “She’s well known to many voters beyond her job as chairwoman. Many know her personally.”

Sanders has taken Clinton to the final weeks of Democratic primary with an insurgent campaign that continues to portray the former secretary of state as a Washington and Wall Street insider. He could employ similar tactics to boost Canova.

Wasserman Schultz, though, responded to Sanders’ intervention by saying she remains neutral in the Democratic presidential primary and is confident about her own chances.

"I am so proud to serve the people of Florida's 23rd district and I am confident that they know that I am an effective fighter and advocate on their behalf in Congress," Wasserman Schultz, who was recently endorsed by President Obama, said in a statement.