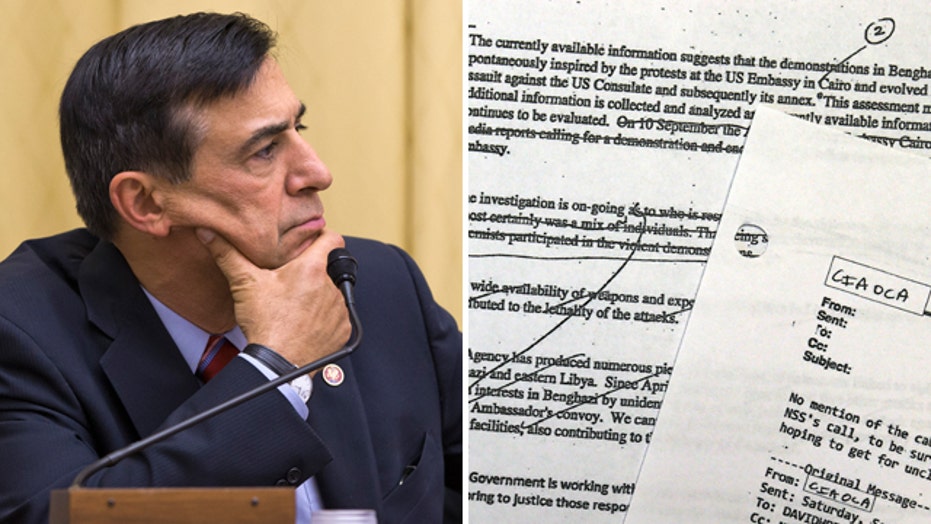 Republican Rep. Darrell Issa issued subpoenas Tuesday for a host of State Department emails and other communications on the Benghazi terror attack, signaling that the Obama administration's recent document dump would not satisfy congressional investigators.

Issa, chairman of the House Oversight and Government Reform Committee, claimed in a letter to Secretary of State John Kerry that the department is still "withholding documents."

He demanded the department release more on the administration's behind-the-scenes discussions, in the days after the attack, on how they would describe the strike. These documents have since become known as the "Benghazi talking points."

"The State Department has not lived up to the administration's broad and unambiguous promises of cooperation with Congress. Therefore, I am left with no alternative but to compel the State Department to produce relevant documents through a subpoena," Issa wrote to Kerry.

State Department spokesman Patrick Ventrell said Tuesday that the department "remains committed to working cooperatively with the Congress" and would "take stock" of any requests for information -- but noted that the department has provided thousands of pages of documents.

"We have demonstrated an unprecedented degree of cooperation with the Congress on the issue of Benghazi, engaging in over 30 hearings and briefings for members and staff, and sharing over 25,000 pages of documents with committees," he said. "All of us -- in the administration, in the Congress, in the media -- we should all be focused on the issue of protecting the American diplomats and development experts who are working every day to advance America's national interest and global leadership."

Issa, in the letter, said he was issuing a subpoena that would cover "all documents and communications" for 10 current and former State Department officials.

This includes former spokeswoman Victoria Nuland, as well as nine others. Nuland is the official who, in the emails released earlier this month, could be seen pressing other agencies to remove references to prior attacks and security warnings in Benghazi -- expressing concern that the warnings could be used by lawmakers to criticize the State Department.

Issa wrote that her comments suggest "that she did not raise these concerns in a vacuum," noting specifically that Nuland said some of the changes did not "resolve all my issues or those of my building leadership."

Issa wrote: "The documents the enclosed subpoena covers will help the Committee understand why, although on the day after the attacks senior State Department leadership believed that Islamic extremists were involved, there were reservations about publicly acknowledging any such involvement just three days later. This issue is at the heart of the Committee's ongoing investigation."

The committee confirmed to Fox News that the subpoena has been served.

Issa gave the department until June 7 to comply. The subpoena would cover communications under the leadership of former Secretary of State Hillary Clinton.

The intelligence community's final talking points compiled for members of Congress suggested the Sept. 11 attack that killed U.S. Ambassador Chris Stevens and three other Americans stemmed from protests over an anti-Islamic video rather than an assault by extremists. Five days after the attack, U.N. Ambassador Susan Rice relied on the talking points in a series of interviews on the Sunday talk shows.

Republicans have accused the Obama administration of trying to mislead the American people about an act of terrorism in the heat of the presidential campaign. The White House says Rice reflected the best information available while facts were still being gathered.

After several revisions, the gist of the talking points read: "The currently available information suggests that the demonstrations in Benghazi were spontaneously inspired by the protests at the U.S. Embassy in Cairo and evolved into a direct assault against the U.S. diplomatic post in Benghazi and subsequently its annex. There are indications that extremists participated in the violent demonstrations."

Issa said the emails and documents failed to answer the question of who else at the department other than Nuland had concerns about the early versions of the talking points. The chairman is seeking all documents and communications related to the talking points from former officials such as Nuland; Cheryl Mills, counselor and chief of staff to Clinton; and Philippe Reines, a deputy assistant secretary to Clinton; as well as Deputy Secretary of State William Burns.