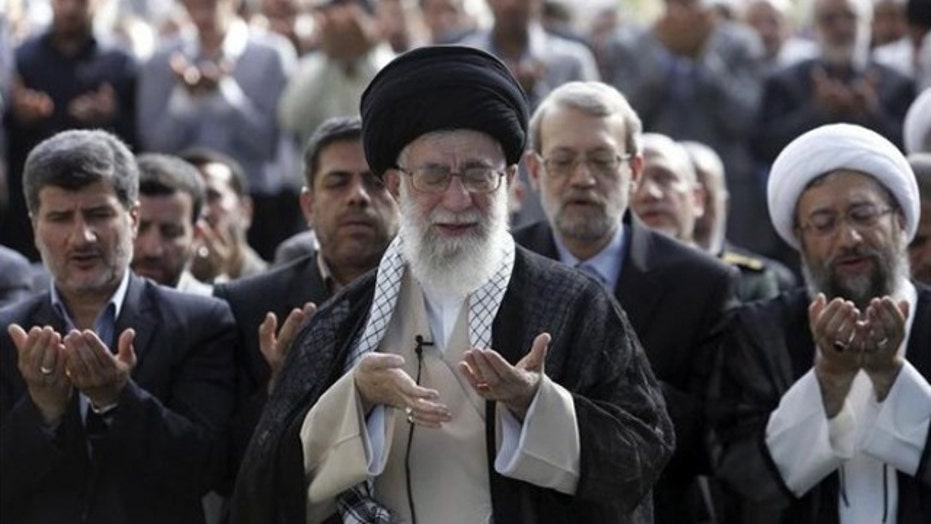 Iran's supreme leader calls for the destruction of Israel

Behrooz Sarshar has clear hopes for his native Iran: “We want to be free, independent, and a good friend for America and the West. This is what we want."

A former colonel in the Iranian police under the reign of the shah, he is one of a group of activists supporting The Iranian Democracy Front, a coalition of 30 opposition groups that met on Capitol Hill earlier this week to press for democracy in Iran.

The conference, "Human Rights Violations in Iran," highlighted the Iranian regime’s dismal record on human records and its disputed nuclear program while calling on the West to continue to pressure the regime in Tehran.

The group is now demanding that the Obama administration throw its support behind the Iranian opposition, tighten sanctions on Tehran and pursue policies that will lead to the end of the regime.

The conference was held as Tehran continues to target Israel, amid the conflict between the Jewish state and Hamas. Iran's Supreme Leader, Ayatollah Ali Khamenei, has been quoted again as calling for Israel's destruction and demanding that the West Bank join Hamas in launching its own missile attacks.

Khamenei called Israel "a rabid dog," accused it of committing "genocide," and said that the Islamic world should arm itself against Israel.

"The Muslim world has a duty to arm the Palestinian nation by all means," he was quoted as saying.

The Iranian opposition says it is clear that the Iran regime, which remains on the U.S. State Department list as the top state sponsor of terrorism, should be removed from power.

The "American administration has put all their eggs in the government's basket, they are totally ignoring every opposition groups, supporters of democracy and I think they are missing a big opportunity to at least have a dialogue with those who are against the regime and could be alternative to it," said one of the conference attendees, Reza Taghizadeh, a professor at Glasgow University who is also an adviser to the Iranian Democracy Front. He was imprisoned by the regime and accuses Tehran of sowing the current Middle East unrest.

"They want to have the region in chaos, it’s as simple as that," he said.

The U.S. State Department told Fox News that it is not aware of any plans to recognize the opposition groups.

"The only way to get rid of the government is the power of the Iranian people," said Dr. Nasr Esfehani, a spokesman for the Iranian Democracy Front, who had served as the minister of the interior in the shah's government. He blames the West's cooperation with and acceptance of the Islamic regime for keeping it in power.

"If it were not for help from the West, they would have vanished 20 years ago," he argued.

"The U.S. missed a massive opportunity in 2009 to put its support behind a secular, grassroots opposition movement in Iran," said Lisa Daftari, a Middle East expert and Fox News contributor. She said the Obama administration did not do enough to support the so-called Green Revolution, when a massive number of  anti-regime demonstrators took the streets to protest the re-election of then-Iranian President Mahmoud Ahmadinejad, but were gunned down and oppressed by the government.

"The Iranian opposition introduced itself to the world as a population of young, savvy, educated freedom fighters who were the ideal conduit to changing the regime in Tehran. But the U.S. has opted instead to try a policy of diplomacy, failure after failure, meeting after meeting, cozying up to a dangerous regime who has suffocated its own people at home while extending its tentacles in Syria, Lebanon, Iraq and Gaza," Daftari said.

To counter Tehran, The Iranian Democracy Front states that "The Islamic Republic of Iran cannot be reformed. The only solution to reinstating the people's sovereignty is the elimination of the regime. This illegitimate government does not see itself as responsible to the people; its only priority is the continuity of its own existence."

The group says that "the people of Iran, with or without the free world's support, will topple the illegitimate and anti-human Islamic regime ... the best support the free world can provide is to refrain from supporting the Islamic Republic. We strongly believe that the people of Iran will succeed in establishing a secular regime."

Daftari says despite hopes of Iranian reform in the West, nothing will change Tehran's policies.

Ben Evansky and Lucas Tomlinson contributed to this report.